Only His Hairdresser Knows For Sure 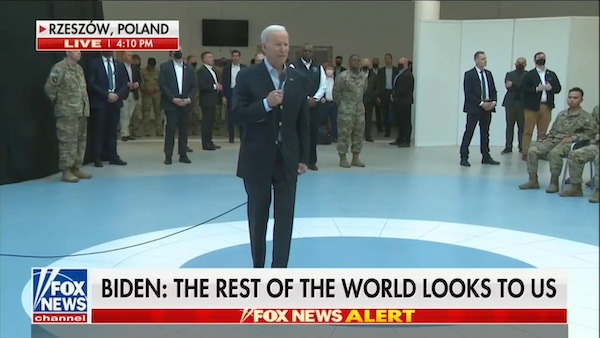 Biden Is confusing in Poland.

While speaking to U.S. troops in Poland on Friday, His Lying Demented Fraudulence, Emperor-Wannabe Joe “Applesauce Brains” Biden gave a preview of what they would see when they go to Ukraine.

“You’re going to see when you’re there, and some of you have been there, you’re going to see women, young people, standing in front of a damn tank just saying, ‘I’m not leaving, I’m holding my ground,’” Biden said. “They’re incredible.”

The president spoke to a small group of soldiers from the 82nd Airborne Division stationed in the Polish city of Rzeszow.

Biden repeatedly spoke about Ukraine to the troops, telling them they were there to support the Ukrainian people, even though he has repeatedly promised not to send American troops into the country.

“What’s at stake, not just that what we’re doing here in Ukraine to try to help the Ukrainian people and keep the massacre from continuing,” he said. “Beyond that, what is at stake, is what are your kids and grandkids going to look like in terms of their freedom.”

Biden told the American troops they were in a generational fight against the forces of autocrats.

“What you’re engaged in is much more than just whether or not you can alleviate the pain and suffering of the people of Ukraine. We’re in a new phase, your generation, we’re in an inflection point,” he said.

“You’re in the midst of a fight between democracies and oligarchs,” he added.

Why is Biden telling US troops what they’re going to see when they’re in Ukraine? When are they going to Ukraine? pic.twitter.com/dV9u2FISMY

Biden also said the Declaration of Independence sounds “corny” and claimed the U.S. has never lived up to it.

“The president has been clear we are not sending U.S. troops to Ukraine, and there is no change in that position,” a White House spokesperson said.

UPDATE: A @WhiteHouse spokesperson tells me: "The President has been clear we are not sending U.S. troops to Ukraine and there is no change in that position."

Actually, Biden has been far from clear on the subject.

Actually no, what he just said is the OPPOSITE of clear pic.twitter.com/8fMIOZQ75k

The socialists in Silicon Valley are doing their bit to cover for the Liar-in-Chief by spinning his words.

Birdwatch is hilarious. "You're going to see when you're there," Biden said. Why would those troops be there unless he sends them there? Are they going to Kiev on vacation? https://t.co/0iHD7Yf15z pic.twitter.com/ReIGGj1v37

Biden Is confusing in Poland