Mr. President, Stop Blaming Others And Look In The Mirror 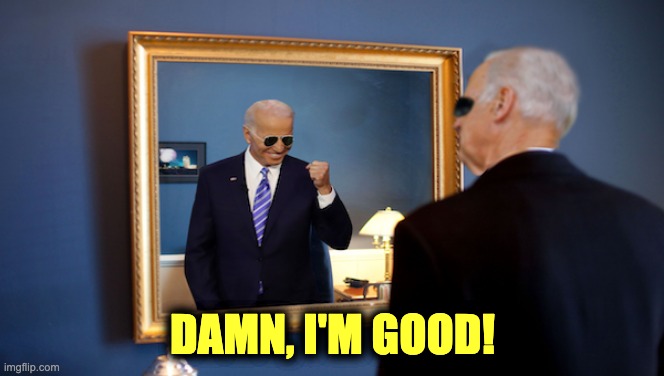 We recently learned that President Joe Biden is irked at his staff over the country’s negative view of him. Many presidents have a knack for not taking responsibility for their shortcomings, but you need not be a political consultant to know Biden should look in a mirror.

Whether obstinate, belittling, or beholden to radicals, his traits are not commendable.

If Biden is angry that his underlings have to clean up his mistakes or cannot present a coherent message, how is that not his fault? Where again does the buck stop? The man is a lifelong politician.

Remember, Biden once was pro-life, tough on crime, and 40 years ago, he even voted for similar tax cuts to those he now decries.

It’d be nice to modify away from the fringe toward where more Americans are; instead, Biden remains most known for gaffes and antipathy toward regular people, yet now he blames aides?

Someone recently told me Biden’s misstatements mattered very little when he was just a Delaware senator but now, as commander in chief, being a blowhard has consequences.

“Overall, or overwhelmingly, the policies of this administration are so bad that their results and appearances are beginning to look so useless to the average person that even dumb people know that this administration can’t shoot straight,” the Pennsylvanian added.

Biden has a disingenuous chief of staff, an ineffectual Cabinet, and an execrable press secretary, but even they cannot be faulted.

Biden has long been loquacious to a fault, yet has somehow still uttered few memorable lines in a half-century of public life — other than plagiarizing British politicians, which quickly concluded his first presidential run a generation ago. (His second failure came two decades later when he could not secure 1% support in Iowa.)

His 2020 campaign was headed for the latrine after porous placements in Iowa and New Hampshire until the Democrat establishment rallied to stop an America-hating socialist from becoming the party’s nominee. Then COVID-19 allowed him to campaign awkwardly from his basement and eventually sneak into the Oval Office, mainly due to the country’s Donald Trump fatigue and a partisan media.

He hasn’t been a uniter, and there has certainly been no return to normalcy.

Jimmy Carter alienated domestic and international allies; George H.W. Bush struggled to be articulate when not on the script; Bill Clinton was vainglorious and insecure, and Barack Obama was the most fervent ideologue imaginable who scoffed at bipartisanship.

Biden is nearly 80. His party controls all of Washington. His shortcomings are no one’s fault but his own.

Before jetting off to another beach weekend, the president gave an unnecessary speech Thursday night, appealing to simple-minded Americans.

It was replete with the usual “do something” platitudes and hyperbole, with every “for god’s sake” cliché possible, while inappropriately rehashing stories of dead children for his partisan political agenda. It was divisive, dishonest, will not save any lives, and absolutely will not be remembered.

If anything, the president derailed or deterred progress that bipartisan senators were making.

Thankfully, a simultaneous speech at the Reagan Library by an esteemed Republican senator was the polar opposite. During 40 minutes, Ben Sasse explained the White House’s “woeful disconnect” and choice of decline but also reminded us of America’s greatness and presented potential solutions.

It is a time for choosing, as the Nebraskan noted, and Americans are choosing to tune Biden out.