Biden Back In Basement Until After Thurs. Debate-Is He Hiding From Hunter Stories? 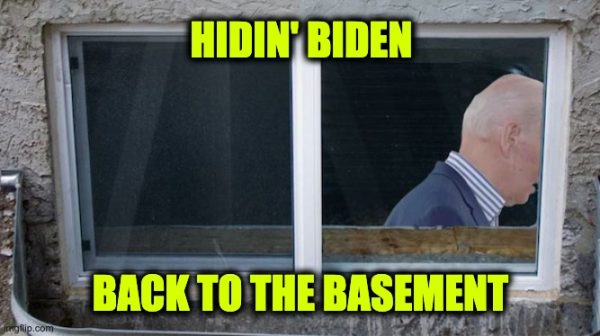 The next presidential debate between Donald Trump and Joe Biden is set for Thursday. Biden will apparently “not be seen again” in public until he shows up on the debate stage. Is he studying for the debate, or is he hiding for an onslaught of more stories about Joe using his V.P. office to help his son Hunter? According to sources, there is much more coming. Will it becoming before the debate? Biden in hiding

Could it be that he needs that many days to prepare for the onslaught of questions he’ll be asked about son Hunter’s emails and business dealings with foreign companies? Possibly. The moderator, a Liberal from NBC News, probably will ignore the Hunter story, but you know President Trump won’t ignore the Hunter laptop.

Democrat presidential nominee Joe Biden ran from a question on Sunday about the FBI, which comes after he snapped at a reporter late last week for asking him about the growing scandal involving a laptop that may have belonged to his son, Hunter.

[…]The emails came from a laptop computer that was reportedly dropped off at a computer repair store last April in Biden’s home state of Delaware. The person who brought the laptop into the store never paid for service and never retrieved the device. Federal law enforcement officials reportedly seized the laptop in December after the store owner alerted them to it, but not before the store owner made a copy of the hard drive and gave a copy to Rudy Giuliani.

Joe Biden walks away as a reporter asks him about the FBI seizing his son Hunter’s laptop
pic.twitter.com/wE8ywouLxK

CBS's Ed O'Keefe on Face The Nation: "[Joe Biden] will not be seen again after today until Thursday night."

REMINDER: Joe Biden and his campaign have not disputed the authenticity of the bombshell emails which detail the extensive corruption of the Biden family. pic.twitter.com/obMn3QRxKS

Is Joe hiding from the Hunter Biden story?

Investigative reporter/author Peter Schweizer was interviewed on the radio Saturday. He said that former Hunter Biden business partner Bevan Cooney provided 26,000 emails to him–YIKES! The first of those emails was published last week and reported how Hunter and his associates helped a  “delegation of Chinese investors, and Communist Party officials managed to secure a private, off-the-books meeting with then-Vice President Joe Biden.

Steve Bannon just told ⁦@SharriMarkson⁩ in Australia that Hunter Biden’s lawyers have requested the return of the laptop. Okay … by doing so they’re admitting the laptop did belong to Hunter. pic.twitter.com/zPK1AlzpsE

Zero Hedge reports that “Steve Bannon admitted that he’s the architect of a coordinated roll-out of the Hunter Biden laptop contents and that there’s much, much more to come.”

The Bidens are about to be hit with multiple stories from multiple media sources based off evidence beyond the hard drive. Fox and Peter Schweitzer have already started but bigger more mainstream companies are going to weigh in. We already have set in motion the various apparatuses that will release everything.

And whatever you think of Bannon, the guy keeps his word:

I have many criticisms of Bannon, like ignoring my warnings in 2017 the Ukraine story was going to be a big deal.

I can't think of a single example of him saying he had the goods on the story that didn't pan out.

If he says a lot more is coming he's not shooting blanks.

On Monday morning, the Director of National Intelligence John Ratcliffe confirmed that the Russians had nothing to do with Hunter Biidens’s laptop, despite what the Democratic Party spinners claim.

Every day there is more info coming out proving that the laptop was indeed Hunter’s, giving legitimacy to the NY Post story.  There are threats of much more to come from the hard drive and other sources, such as the 26K emails Peter Schweizer is reading.  Is Joe Biden in hiding so he cannot be questioned about the story?   We will find out over the next few days.