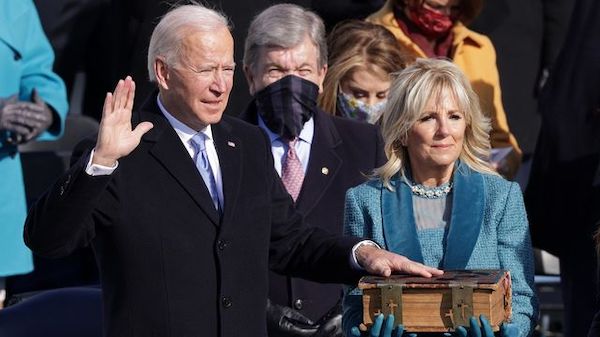 I usually reserve my hyperbole or strongest condemnations for repugnant politicians like Kamala Harris, Ilhan Omar, Bernie Sanders, and/or Rashida Tlaib. On Tuesday evening I was minding my own business when word of President Joe Biden’s cavalier declaration to violate his oath of office came out.

My jaw dropped, and I rushed to read more about his illegal extension of the eviction moratorium three days after it finally expired.

Biden’s statement was lawless, morally abhorrent, and offensive. That he was knowingly going forward, ignoring a Supreme Court decision is contemptuous of the court and the Constitutionally established separation of powers. Biden is breaking his oath to protect the Constitution.

Left-wingers can lie and use emotion to obscure facts, but millionaires and billionaires are not landlords; it’s ordinary folks hurt by this perpetual moratorium. This nonsense also contributes to the 10-20% median rental price increase the past year. That rising cost and lack of inventory hurts younger and lower-income people Biden and his Democrats claim to value.

This is not May or November 2020. There is no economic crisis. There are more than 9 million open jobs employers are desperate to fill; yet after 17 months of free rent, $600/week unemployment handouts, and other mandated welfare, Democrats prefer to continue hurting innocent people. Most squatters they admire are not using programs to help them pay bills, and won’t work.

The hard left, which continues to lose and lash out, bullied the weak president into a potentially impeachable move, or at least something to shut down the U.S. Senate over.

As a friend recently reminded me, the demonization of landowners is a crucial part of every left-wing revolution. “Abolish rent” signs often are seen alongside Defund the Police at hate rallies.

“The reality is a lot of landlords are middle-class families who invest in property, are handy enough to keep up those properties, and use the rental income to supplement themselves,” Erick Erickson wrote Wednesday. “Renters have had an opportunity to pay their rent. The government has had an opportunity to help landlords. The whole system has failed. It is time to stop propping it up and let it sort itself out. To deprive landlords of the power to evict tenants who do not pay is to deprive the market of additional rental housing as landlords cut their losses.”

White House Press Secretary Jen Psaki, who’s been a trainwreck of lies and condescension, claimed the decision was approved by the CDC’s lawyers and White House Counsel’s office.

She argued Wednesday the new Biden Administration order is different from the Supreme Court ruling in June.

Even Gene Sperling, Biden’s senior adviser, said earlier this week that the CDC determined a more limited moratorium could not be accomplished legally.

There are 44 million rental units in the U.S., owned by roughly 8 million landlords. The majority of property owners rent a basement apartment or one or two small units. They are not BlackRock. Those 8 million are having crimes committed against them every day. Let’s hope for consequences next fall on Election Day.