NY Times: Biden Has A Short Fuse And Swears At Aides When Frustrated 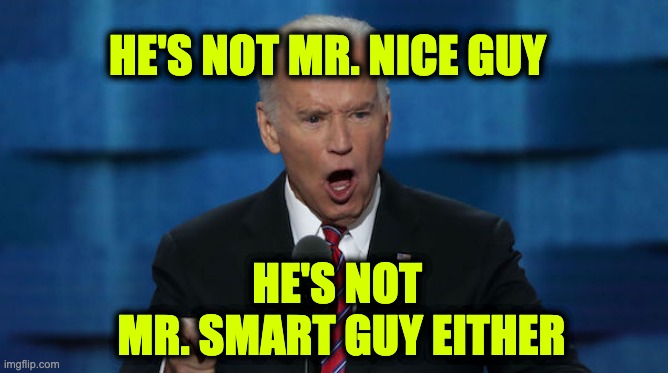 According to a New York Times piece— despite his “folksy” demeanor, Joe Biden has a short fuse, is “obsessed” with detailed explanations, doesn’t make decisions quickly, and will go on profanity-laced tirades when he’s frustrated.

Did anyone not see this coming? The man was yelling at people, asking him questions on the campaign trail. He called people names and challenged one guy to a push-up contest. He swore at a guy that asked him about his policy on the right to bear arms, yelled at reporters, and he called a young woman a “lying dog-faced pony-soldier.” And all of that was just during the campaign for the Democratic Primary.

The Times spoke with more than two dozen current and former staffers who say that Joe Biden isn’t the easiest guy to work for. In the report, the Times writes that their profile of POTUS 46 reveals “a portrait of a president with a short fuse, who is obsessed with getting the details right — sometimes to a fault.” Getting the details right–while he gets so much wrong.

Biden demands “hours of detail-laden debate from scores of policy experts” before he makes a decision — which can sometimes take days or weeks as he “examines and second-guesses himself and others.” West Wing staffers call this his “Socratic journey,” which is a polite way of saying that he relies on other people’s opinions rather than his own. (That’s probably a good thing since he’s been wrong on almost every foreign policy decision for the past 40 years, including advising against the killing of Osama Bin Laden.)

Those trips are often difficult for his advisers, who are peppered with sometimes obscure questions. Avoiding Mr. Biden’s ire during one of his decision-making seminars means not only going beyond the vague talking points that he will reject, but also steering clear of responses laced with acronyms or too much policy minutiae, which will prompt an outburst of frustration, often laced with profanity.

Of course, the Times portrays this as a good thing, but it is clearly very taxing on his staff. Generally, a senior executive like a president who obsesses with the details instead of the big picture does a lousy job.  The last president who was obsessed with the details was Jimmy Carter. Perhaps that’s why the Biden presidency is already being compared to Carter’s/

Although Biden wants to take his time when making decisions, there is a sense of urgency that “leaves him prone to flares of impatience” because he knows that he only has a limited amount of time to make his mark, especially if a few more Republican seats in the House after the 2022 mid-terms could thwart his agenda.

The Times notes that he doesn’t get into “fits of rage” like his predecessor, nor is he known for “the smoldering anger or sense of deep disappointment” that staffers became accustomed to from former President Obama. Instead, he demands that his staffers be prepared for any possible question or get cut off, yelled at, or hung up on.

For as much as Mr. Biden projects an aura of ease — with his frequent backslapping, references to Irish poetry and liberal use of the phrase “c’mon, man” — his aides say it takes a lot of behind-the-scenes work to prepare him to project an assured demeanor…

…But several people familiar with the president’s decision-making style said Mr. Biden was quick to cut off conversations. Three people who work closely with him said he even occasionally hangs up the phone on someone who he thinks is wasting his time. Most described Mr. Biden as having little patience for advisers who cannot field his many questions.

“You become so hyperprepared,” said Dylan Loewe, a former speechwriter for Mr. Biden. “‘I’ve got to answer every conceivable question he can come up with.’”

He seems to be the kind of boss that has his staff walking on eggshells, snaps at them when he’s frustrated and lets his staffers deal with the fall-out when queried by the press why he’s taking so long to make a decision on a pressing issue like the border crisis. And as Hamas continues to send missiles into Israel, Biden still hasn’t decided on who should be America’s ambassador to the Jewish state.

But at least there are no mean tweets, right?