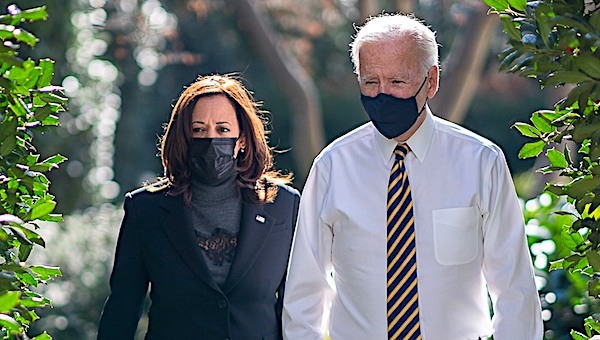 Before they were elected, Dementia Joe and Kamala “I will never visit the border,” Harris were very clear on their messaging regarding the virus from Wuhan. It was basically, “Everyone! Be Afraid All The Time! Wear Your Mask 24/7, Or You’re All Going To Die! Well that, and Orange Man Bad! Vote Biden-Harris!”

It worked for them thanks to the corporate media and their Big Tech buddies.

But now we’re over 100 days into the Biden-Harris administration. Despite millions of vaccines, states opening up, and cases declining in many areas of the country, the message hasn’t changed much.

The President seems to rely on his mask the same way Linus from Peanuts needed his blanket.

Biden freaked out when he was at an event in Georgia and couldn’t find his mask despite being outdoors and having been fully vaccinated several months ago. Dementia Joe forgets he had his first shot when Donald Trump was president.

"I’m looking for my mask. I’m in trouble.”pic.twitter.com/MQ6Dl2nm80

Remember when he wore a mask outside as he walked to a podium to tell America we didn’t have to wear a mask when we were outside?

It’s these kinds of weird behaviors by Biden-Harris that are making people wonder what the point is in getting vaccinated.

He’s now saying that it’s a “patriotic duty” to keep wearing a mask after being vaccinated.

Biden on wearing masks despite being vaccinated: “It’s a patriotic responsibility for God’s sake” pic.twitter.com/UZRxy0gKlV

If the Biden-Harris administration believes that vaccines are highly effective at preventing illness, which is the point of a vaccine, shouldn’t they be acting as if they believed the shots were effective? But the President and Vice President continue to behave as though they have not been given an efficacious vaccine — they still wear a mask when they’re in public.

In the past few days, President Biden, First Lady Jill, and VP Harris, and Second Gentleman Doug Emhoff, were spreading additional doubt about the efficacy of the vaccines via their masked-outdoors behavior.

On Wednesday, Harris, and Emhoff were wearing masks outdoors and then kissed through their masks on the tarmac before Harris boarded a plane.

I guess you can’t really blame the guy… after all, can he really know what kind of disease she may have picked up? Look who she was with when Biden spoke to congress? 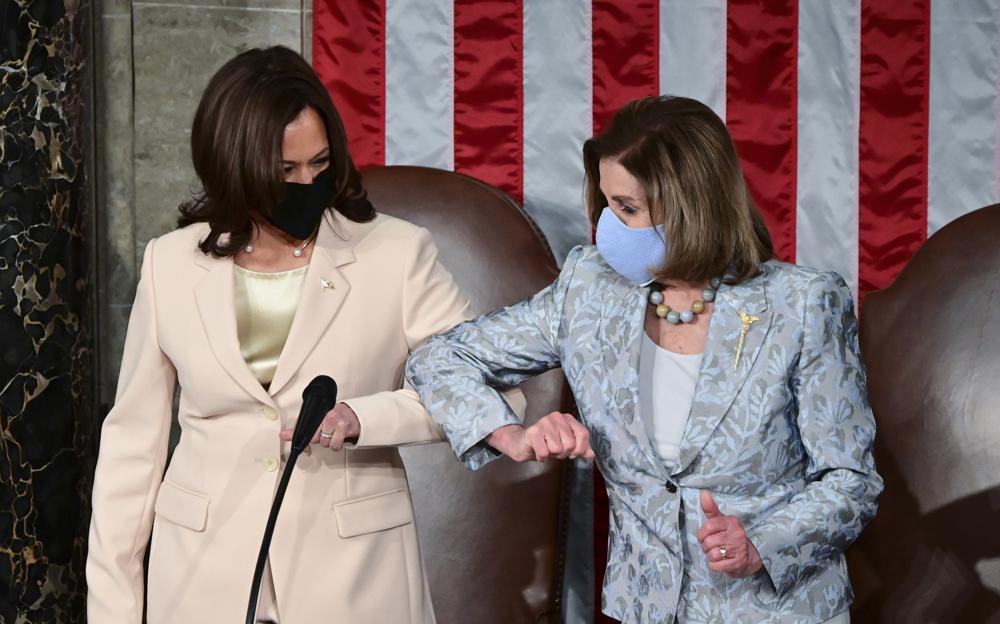 On the bright side, we do know that Harris never picked up a disease at the U.S. border with Mexico.

We were spared the disturbing image of the Bidens kissing each other with masks on, or worse, Creepy Joe smelling a little girl’s hair with a mask on.

On the weekend, the Bidens went to visit the home of former President Jimmy Carter and his wife Rosalynn, who are both in their nineties and have been fully vaccinated. 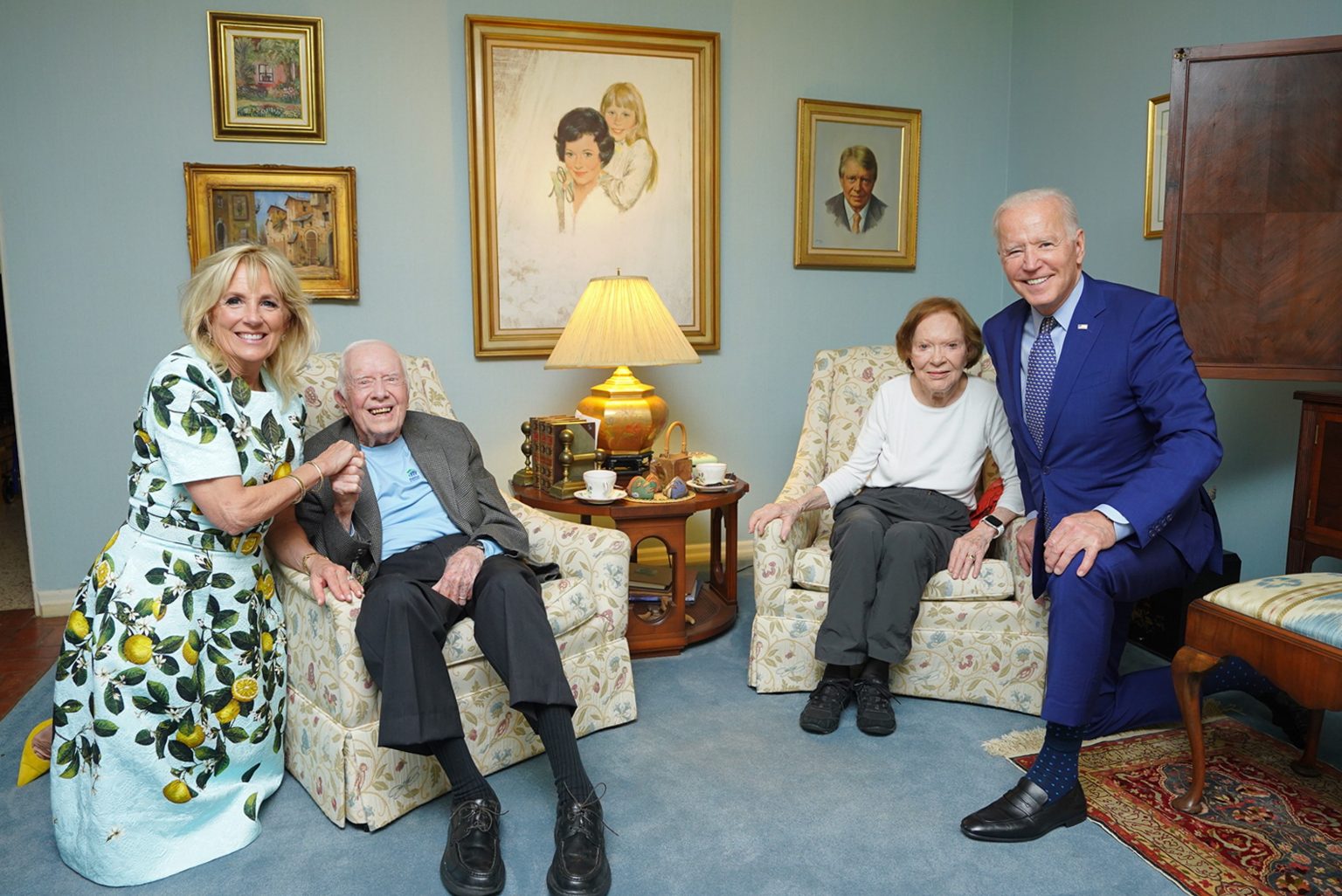 While the picture got a lot of attention for the bizarre perspective, others noted no one was masked up indoors. That’s quite a departure for Joe makes people believe he even sleeps with his mask on.

That unmasked behavior is totally acceptable according to CDC guidelines. After all, it was a small group of people, and they had been fully vaccinated.

The weird part was when the Bidens were leaving the Carters’ home and got outside—they put their masks on. Joe Biden should know putting their masks on when they went outside is not recommended by the CDC. After all, he wore his mask when he went to make that announcement.

I’m old enough to remember when the corporate media was apoplectic when a certain orange-hued septuagenarian who is a bit on the heavy side and had a predilection for fast food and Diet Coke, returned to the White House just days after he was checked into Walter Reed after testing positive for COVID telling people to not let COVID “take over their lives.”

But Biden and Harris wearing masks outside when the CDC says that it isn’t necessary? The MSM must believe that’s different. They mean well, and they’re just taking extra precautions because they care.

But they’re also sending the message that the vaccines aren’t as effective as advertised.

Whether it’s based on “science” or not, there’s concern out there over a very quickly developed vaccine using a brand-spanking new technology that is billed as astoundingly effective and the ticket to returning to normal life, and politicians are trying to coerce people into taking it with things like vaccine passports.

Biden and Harris are the same people who were cautious about the vaccine before they took office because it was developed during the Bad Orange Man’s administration. But now, they are suddenly pro-vaccine and continue to wear masks and distance themselves outdoors after being vaccinated for months.

There is the possibility that they wear masks and socially distance because they smell awful, but no one complained about their aroma before COVID.

So you gotta understand how these two are confusing the heck out of America. They are pushing people to get vaccinated and continue to wear masks. These two confused politicians in the White House are seriously undermining their message that vaccines are safe and effective.