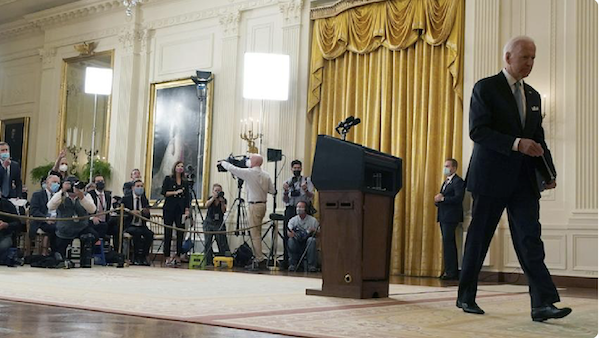 Welcome to Joe Biden’s America; empty store shelves, abruptly shortened press conferences, and what appears to be increasing criticism from some members of the media as the president heads into his second year in office.

The Associated Press noted Monday, “In what’s become a familiar scene, President Joe Biden lingered after delivering a recent speech on the pandemic as reporters fired a barrage of questions.”

But he cut questioning short after he “bristled at a query about the shortage of COVID-19 rapid tests.”

That’s not flattering toward a president the media overwhelmingly seemed to support in 2020 because they didn’t care for Donald Trump, and the feeling was mutual.

But Biden started raising eyebrows when he would say things such as “I’m not supposed to be having this press conference right now.” That kind of remark raises eyebrows among the press corps, which scratches its collective head wondering who told the president—the most powerful politician on the planet—he should or should not be doing something.

The frustration appears to have taken on an interesting angle, with a story appearing at Fox News that is loaded with images posted on Twitter of empty store shelves. This cannot be fabricated, especially when so many sources are involved. Such images are bad for an administration that came roaring into office promising to “crush COVID,” pass legislation to end so-called “gun violence,” and unite the country.

The scorecard is abysmal. Biden’s gun control policies have gone nowhere. As for beating COVID, Dr. Mehmet Oz has this one nailed in an Op-Ed at Fox in which he observes, “It’s clear that even though Biden said he would defeat this virus, it’s COVID that has defeated him.”

Some people suggest Biden doesn’t want to do press conferences because he cannot maintain a cogent thought through an entire sentence. That may not be fair but what might be fair is that his people don’t want him doing press events because he can’t answer the tough questions credibly. After all, it is tough to say the economy is in good shape and people are okay when the cost of a gallon of gasoline I about $1.25 higher than it was when he took office, and grocery store shelves are empty.

While Biden does, as the AP noted, field more questions on the move—delivering whatever glib soundbite he can muster before he moves on than previous presidents, he doesn’t do the press conferences. Biden is good with one-liners, and he traditionally gets a pass when he blurts out something not directly related to the question.

But that time appears to be coming to an end. One-line remarks don’t fill store shelves. They don’t fill gas tanks. They don’t lower food costs. And they no longer solve anything.