Biden Asks Why Reporters Are Suddenly Asking Him Questions? (VIDEO) 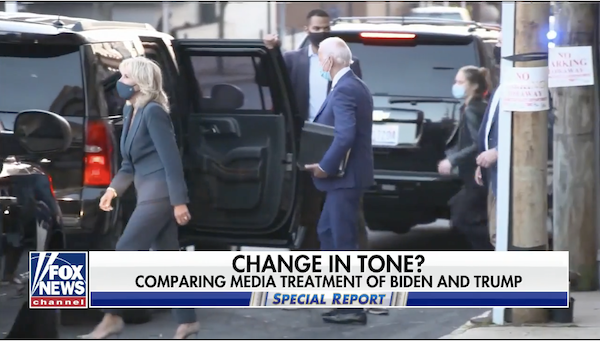 After months of hiding from the media and cherrypicking the questions from “friendly” outlets, Joe must’ve figured he’d get a free pass forever. Well, SURPRISE! Biden gets real questions

There’s been a distinct difference in Trump and Biden’s media coverage, and it’s incredibly noticeable to everyone… except for the mainstream media.

Howard Kurtz spoke about it on Fox News recently:

Gee, why does the media get blamed for the current political divide?

Because being polemicists is good for business — the anti-Trump media has been given a lifesaving injection called the “Trump Bump,” and the free ride might be ending soon, which will mean their inevitable demise because of the new media.

Right after Biden says, “Mi casa es su casa,” about media access to the White House in a Biden administration, reporters are herded away by the Biden handlers. One brave soul shouted a question because the fog seemed to have lifted, and he remembered that he’s a reporter and not a partisan hack. He’s not even that tough on Joe. He’s just asking questions about relevant issues. You know, to report to the people. Shocking, I know.

Asked Biden if he will encourage teacher unions to cooperate to get kids back in school because the COVID task force said it is safe to be in the classroom. He didn't answer.

“Why are you the only guy that always shouts out questions?” he said. pic.twitter.com/x2DsG5Fmgo

Gee, maybe it’s because Joe has had fewer media scrutiny than anyone who has run for president — ever?

Why was Joe so upset with Bo Erikson?

It could be because as social media and the rest of the Media (D) ignored the Hunter Biden laptop story, Erikson dared to ask the Democratic candidate what he thought about the New York Post’s reportage.

How dare he acknowledge that particular scandal in the middle of an election!

Bo is the rare journo out there actually doing his job and not asking only softball questions.

Contrast to what the Media (D) is like with the Trump administration recently:

Look at the sheer amount of disrespect and entitlement reporters show when VP Mike Pence doesn't answer their questions. pic.twitter.com/QGbkQ2jLbQ

"I don't call on activists," is how @PressSec ended her press briefing. A reporter kept shouting, "When will you admit you lost the election?"

"I'm not an activist…" a different reporter can be heard saying. pic.twitter.com/Xx5tu348Bg

But that’s no change from what it has been for 4 years:

Trump signs PPP bill as reporters yell questions at him. “You are something else,” he says. pic.twitter.com/AdP3SlXguE

As Trump walks out of the White House briefing room — his first appearance in the room as president — without taking any questions, reporters shout out after him.

"The point of the briefing room is to take questions!" one reporter yells. pic.twitter.com/RULW94pZpU

Reporters yell questions at Trump after he signs MLK Day proclamation: “Mr President, are you a racist?” pic.twitter.com/GsOA9jaPoM

And this… is how it all started:

Frankly, it’s not a bad thing to have a media that is a bit hostile. They’re supposed to keep politicians in check, right?

The problem is that the media under the Obama administration gave them a free pass for every corrupt dealing and governmental overreach then praised it as “scandal-free.” Then, on Day 1, the same media outlets called Trump’s Inauguration Day speech “dark” and “Hitlerian,” and coverage went downhill from there. The media printed every single salacious rumor and conspiracy theory that they could find. Where Obama couldn’t do anything wrong, Trump couldn’t do anything right.

That’s not healthy for democracy.

And we’re about to get another dose of it. Good and hard.

Joe Concha has said that under a Biden administration, it will be a return of the “Marshmallow Media.”

So, we’ve got that to look forward to if Trump’s lawsuits fail.

Don’t worry. There are other options out there.