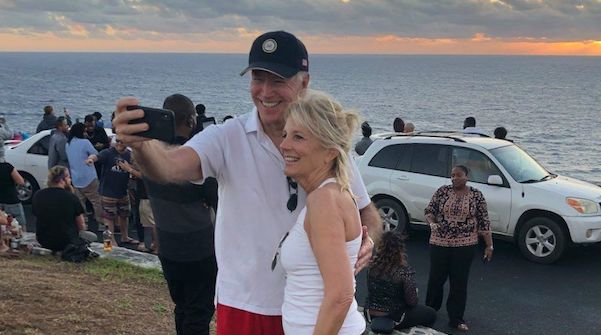 As much of America was threatened by a nasty, bitter winter storm, President Joe Biden was out of office, soaking up the sun in the US Virgin Islands.

And while many were focused on what a tone-deaf bit of optics the ill-timed trip turned out to be, sources from within the President’s inner circle appeared to suggest that the vacation may very well be the impetus to his forthcoming 2024 announcement.

President Joe Biden this week returns to St. Croix, one of his and first lady Jill Biden’s beloved vacation spots, seeking a final opportunity for rest before what is expected to be a contentious 2023 and reelection run.

As Biden unwinds in a familiar spot – the first couple have visited the US Virgin Islands for more than a dozen years, vacationing there approximately ten times since the mid-2000s – the work on his path forward intensifies back in a frigid Washington, DC. Advisers are already preparing the president’s annual State of the Union address, typically delivered in late January or early February, viewing the speech as an opportunity to lay down the stakes and themes that Biden could adopt on the campaign trail.

Sources are suggesting that Biden’s mind is made up.

The first couple arrived in St. Croix on Tuesday, along with family members, a gathering of the tight-knit clan who, according to several people with knowledge of recent conversations who have spoken to CNN, have now pledged support for another White House run by Biden. Senior administration officials once viewed this week’s tropical escape as a crucial juncture that would play a major part in deciding his political future, and – while the president does still plan to mull with his family the pros and cons of mounting a reelection bid – people who have discussed the matter with him lately say the decision is essentially made.

There would be precedent as well.

After the Bidens skipped the US Virgin Islands tradition the last two years, this trip may have some of the same vibes as one of their more recent vacations. In the early hours of 2019, when Biden was last contemplating a presidential bid, the couple were photographed taking a selfie at Point Udall in St. Croix on New Year’s Day, catching the first sunrise of the new year at the easternmost point under the American Flag, as the popular tourist spot is known.

A decision had been made. Several months later, Biden would announce his candidacy for the presidency.

Joe Biden’s reelection hopes could be dashed by the liberal left, however, as several increasingly vocal progressive voices have suggested that it’s time for a candidate from a much younger generation to lead the party.

Cross Posted With Flag and Cross