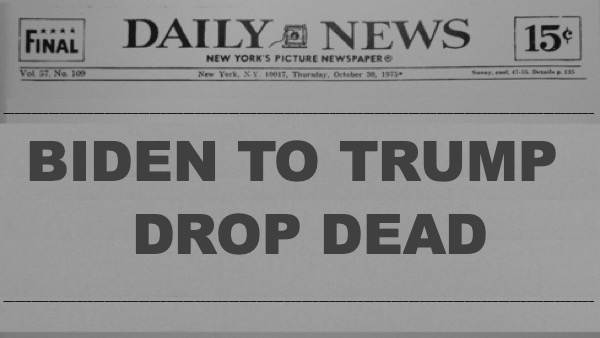 Does Democrat Creepy Joe Biden want Donald Trump dead?  It sure seems that way.  While speaking at the Little Haiti Cultural Center in Miami, Florida, on Monday, the cerebrally challenged candidate fantasized about the president being handed a death blow on the eve of the election — even as President Trump was still at Walter Reed Hospital.

“Think about this: Wouldn’t it be an irony, the irony of all ironies, if on election eve it turned out Haitians deliver the coup de grâce in this election?” Biden said.

Wikipedia tells us the phrase is French for “blow of mercy” and further describes it as “a death blow to end the suffering of a severely wounded person or animal,” like a “mercy killing,” with or without the person’s consent.

Merriam Webster‘s online dictionary also defines it as “a death blow or death shot administered to end the suffering of one mortally wounded.

Taken in the context of recent statements by leftists following Trump’s hospitalization for COVID-19, it is obvious what Biden’s statement intended.

One Twitter user noted that back in 1994, however, Biden didn’t seem too concerned about Haiti, telling Charlie Rose that no one would care if the island nation sunk into the Caribbean:

Joe, on Haiti, years ago. He didn't think they mattered much then. https://t.co/8auEOsXjIj

Joe, on Haiti, years ago. He didn’t think they mattered much then. https://t.co/8auEOsXjIj

Hmmm…  Sounds rather racist to us. And we know that Jim Crow Joe is a pro at being racist.

This is a threat to the POTUS. Biden’s words are encouraging an assassination. He should not be allowed to run for office. Enough of this rhetoric. If media lets him get away with it they are complicit. @foxnewssunday @Newsmax @OANN @BretBaier @NBCNews @ABC @CBSNews @CNNPolitics

I’m not too sure about that–it seems that he was talking about COVID, not an actual assassination–either way, Creepy Joe was disgusting.