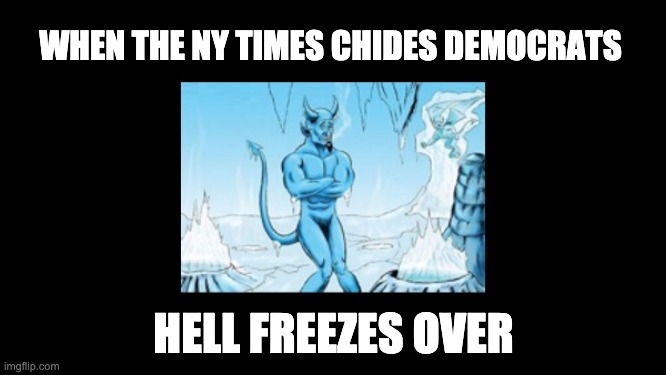 When the editors of the New York Times, the bible of the far left, tells a Democrat to lay off the government over-reach, you know something is up. The Times is telling President Biden to “Ease Up on the Executive Actions.”  Biden executive orders

When starting to read the editorial my first thought was that the Times was criticizing the EOs just to spare Dementia Joe the embarrassment of trying to put another pen in his jacket pocket.

After all, this is the liberal NY Times, part of the leftist media crowd that had a leaked PR strategy of deliberately kneecapping the Trump Presidency and thwarting his reelection. After their nesting dolls of various ‘Russian Collusion’ narratives proved as hollow as the Mueller investigation, the NYTimes discussed their plan to pivot to running a Trump-is-racist narrative in every news cycle.

Heck, this purveyor of liberal propaganda helped drag Biden’s senile carcass over the finish line without any real participation from the candidate himself. But they were actually criticizing the President. Now they’re telling ‘President Autopen’ to dial back his rule-by-executive order. It must be just a little bit too ‘on-the-nose’ even for the progressive propagandists at the New York Times.

The New York Times editorial board is calling on President Biden to “ease up” on issuing executive actions after a slate of orders were signed the short time since Inauguration Day. Not because they disagreed with executive fiats, but because they were worried Republicans would figure out what was happening

The New York Times editorial board is calling on President Biden to “ease up” on issuing executive actions after a slate of orders were signed in the last week.

“These moves are being met with cheers by Democrats and others eager to see the legacy of Donald Trump’s presidency dismantled posthaste. Republicans, meanwhile, are grumbling about presidential overreach and accusing Mr. Biden of betraying his pledge to seek unity,” the board wrote on Wednesday.

“These directives, however, are a flawed substitute for legislation. They are intended to provide guidance to the government and need to work within the discretion granted the executive by existing law or the Constitution. They do not create new law — though executive orders carry the force of law — and they are not meant to serve as an end run around the will of Congress. By design, such actions are more limited in what they can achieve than legislation, and presidents who overreach invite intervention by the courts,” it added.

…The Times’s editors, however, said that a rush of executive orders “can set up a whipsaw effect, as each president scrambles to undo the work of his predecessor,” citing former President Obama’s creation of the Deferred Action for Childhood Arrivals program, former President Trump’s halting of the program and Biden’s moves “to reaffirm those protections.”

We only wish the leftist media had given the same thought to what impact their ongoing bastardization of the profession of journalism. They used to hold those of any party to account. Now they act as a monolithic uni-party busying itself with hiding the sins of the Democratic Party making excuses for the liberal incompetents, and manufacturing a narrative designed to destruct political outsiders and opponents of leftism. This journalism was never conceived of in the minds of the Framers who granted the press a special mention in the very First Amendment.

It’s time for the NY Times and the rest of the liberal press to begin living up to their designated role in the body politic while we still have a country supporting freedom and liberty.

If you believe the head of the Biden crime family has any intention of stopping at 40 Executive Orders, I have a bridge in Brooklyn to sell you. Listening to his socialist handlers such as Susan Rice and Kamala Harris, a POTUS like Biden who could pass 40 without batting an eye, could just as easily justify passing 400 in what’s remaining in his own mind.

And with several convenient crises to attribute his urgency to — be they health, racial division, climate, or some fake threat of insurrection — he has all the cover his socialist overlords could ask for.

How easily we forget that there were several strains of tyranny that kept the Founders and Framers up at night. One of the major ones was the tyranny of the majority.

Democrats and their sycophants in the mainstream media are very selective in which ones they show any interest in decrying. But when they do perhaps Joe Biden and/or his handlers will listen.

*NEW* BREAKING: Biden ADMITS He Raised The Gas Prices ON PURPOSE So He Can Do This [VIDEO]
America's Freedom Fighters

This Should Be Fun As All Get Out: Watch As Scott & Houston Jones Play ‘Kentucky Roulette’
Great American Outdoors
Pence v. Trump 2024? Former Veep Leaves the Door Open
Flag And Cross