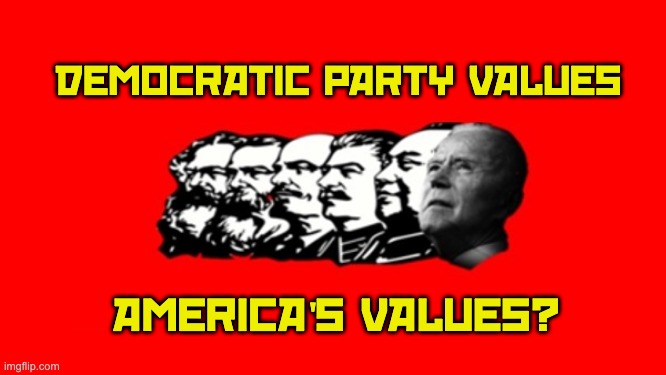 The leftist/Socialist philosophy and elimination of our individual freedoms being pushed by Biden and the leftist Democratic Party is totally antithetical to traditional “Judeo-Christian” teachings. A critical tenet of this leftist philosophy they are trying to shove down our throats is collectivism, which also contradictory the philosophy behind the creation of this American republic that the rights of the individual are superior to the rights of the collective or the government. Biden democrats socialist policies. faith socialism democrats Biden

One of those individual rights is the freedom of religion. People of faith should understand that the leftist philosophy opposes religion. Karl Marx famously said, “Religion is the opium of the people.” Following Marx’s lead, the Dems want the government to supersede God. But that’s only part of why people of faith should reject Joe Biden and the Democratic Party.  Socialism destroys the principles basic to Judeo-Christian and American traditions, such as limited government, individual responsibility, and traditional morals.

Let’s start at the beginning, or in the beginning, or as those who believe that Genesis is about baseball, in the Big Inning. The creation narrative in Genesis explains that man is created in God’s image.  But we also taught that our maker has no bodily form, so how can that be?  The Bible is not telling us that we are all dead ringers for the “big guy upstairs.” If that was the case, the picture on everyone’s driver’s licenses would be the same, which means no one would be able to get a check cashed, voter ID would be useless all of those TV shows that talk about using DNA to solve crimes would be very boring.

“Created in God’s image” is supposed to teach us that just as God acts as a free being, without prior restraint to do right and wrong, so can man. God does good as a matter of his own free choice, and because we are created in his image, we have the choice to do so also. Only through free choice can man indeed be, in the image of God.

It is further understood that for mankind to have real free choice, humans must have inner free will and live in an environment where a  choice between obedience and disobedience exists. God thus created the world such that both good and evil can operate freely; this is what the Sages meant when they wrote, “All is in the hands of Heaven except the fear of Heaven” (Talmud, Berachot 33b).

In other words, God controls all the options we have, but we pick between the correct or incorrect choices.

When it comes right down to it, free will is the divine version of limited government.

God even gives us holy scriptures to use as a guidebook to figure out which way is the good one, but he does not pick winners and losers—it is up to each of us to choose the direction we want to proceed. Big Democratic Party governments want to take those decisions away from us.

As we all are created in God’s image, then “all men are created equal.” What that means from a faith perspective is we all have the same ability to be infinitely good or wicked and to forge a relationship with God regardless of intellectual capability, social background, physical strength, etc. It does not mean, as Socialism ascribes to when it comes to talents, predilections, or natural abilities, we are all equal. If that were the case, we would all be recognized as scholars at the level of Einstein (many of our Moms think we are Einsteins, but that doesn’t count).

Created equal doesn’t mean that everyone should have the same big screen TV, wireless internet, or savings account balance. But Socialism teaches that everyone has the right to an equal amount of “stuff.” Except, of course, for party leaders, they get exclusive benefits.

Have you ever noticed that in Genisis, after four of the six days of creating the universe, the text explains, God “saw that it was good”? The two exceptions are Monday and Tuesday.  Monday (the second day of creation) doesn’t have an “it was good.” Tuesday received a double dose of being good.

On first thought, one might think that God hates Mondays (like much of mankind), but that doesn’t seem right, and it doesn’t explain why Tuesday gets to double-dip.  God is teaching us that rewards are based on what’s accomplished.

Only part of the job of creating oceans gets accomplished on Monday. Genesis 1:6 says water is separated on Monday, “Let there be an expanse in the midst of the water, and let it be a separation between water and water.”

But the next day, God does something else with the water, “Let the water that is beneath the heavens gather into one place, and let the dry land appear,” and it was so. “God called the dry land earth, and the gathering waters He called seas” (Genesis 1:9-10).

On Tuesday, God finished the water job that started on Monday.  Thus Tuesday gets rewarded, and Monday gets bupkis. This is contrary to what Biden and the Democrats want. They believe everyone should be rewarded based on what the government thinks they need, not what they accomplished.  Or as Obama said. “If you’ve got a business, you didn’t build that.”

The Hebrew word for charity, “tzedaka,” has in its root the word “tzedek.” Tzedek means righteous. We are taught that personally giving to charity is one of the keys to being righteous. Leviticus (25:23) says, “If your brother becomes impoverished and his means falter in your proximity, you shall strengthen him—proselyte or resident so that he can live with you.”

Leviticus 23:22 says farmers should leave some of their fields unharvested for the poor to feed on,  “When you reap the harvest of your land, you shall not completely remove the corner of your field during your harvesting, and you shall not gather up the gleanings of your harvest. [Rather,] you shall leave these for the poor person and for the stranger.”  Again a personal responsibility.

The Democrats and their leftist ideals are trying to remove that free choice given to us by God.  They believe that left to their own devices, mankind will do the wrong thing (or at least what socialists think is the wrong thing). Therefore the leftist Democrats are trying to take over the role of God.  Ignoring the meaning of “created in the image of God,” they step in to control our actions, remove our personal choice, and gives it to the government. Thus they are retarding our spiritual development and preventing Americans from moving closer to our maker by following the path laid out by scripture.

The Bible also teaches us that we cannot rely on God to bail us out all of the time. The responsibility to act falls upon each and every one of us. There is a rabbinical commentary about Moses and the splitting of the Reed Sea that teaches this lesson (Reed sea is not a typo).

In Exodus chapter 14:15, Moses sees the Pharaoh and his troops bearing down on the newly freed slave, who are trapped against the sea.   Moses starts praying, but God says, stop praying, and do something!  “The Lord said to Moses, Why do you cry out to Me? Speak to the children of Israel and let them travel.” That is Bible talk for “Hey Mo, stop praying and do something!”  But when Moses lifted his staff over the sea, the water didn’t part.

The Egyptians were closing in. The sea wasn’t moving. Moses and the Israelites stood on the banks of the sea, frozen in fear.

Suddenly one of the newly freed slaves, Nachshon, took the responsibility upon himself to act. He walked into the water…waded up to his ankles…his knees…his waist… his shoulders, and kept walking.  Just as the water was about to reach his nostrils and possibly drown him, the sea parted.

This commentary teaches us that it’s essential to have faith and even believe that God may eventually help. Still, we cannot get that help until we take personal responsibility and act on our own. This, too, is antithetical to the philosophy pushed by Biden and the Democrats. They believe that the government is the first place to look for help, instead of first looking at oneself, family, and community.

The Socialist/Democrats teach citizens the government will always bear the responsibility of protecting us. There is no individual responsibility, just the collective bailout. That’s totally opposed to what our scriptures teach, that each one of us assumes personal responsibility, and via our good deeds, we gain closeness to God.

The long-term objective of the Democratic Party government is to supplant the role of God in mankind’s conscience. As we get closer to the mid-term elections, which is closer than you think, consider that in most cases, your choice isn’t between a Democrat and Republican. It’s between Socialist leadership and one’s faith.

Is Putin Losing Power?
The Lid