Biden Gives His Best Answer On Court Packing, Still Not An Answer 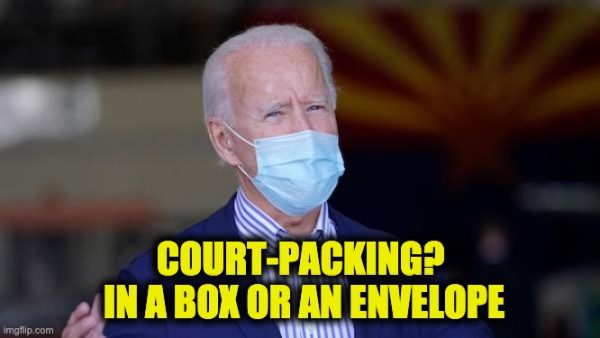 It seems as though the Biden-Harris campaign has finally realized that being “not Trump” isn’t going to be enough to win them an election. Sure, that was the plan, and the Democrats telegraphed it plainly for us to see.  They chose Joe Biden, an unpopular candidate among their most vocal voting bloc, to say to midwestern moderates, “we picked a normal guy so you’d vote for him”…and they likely assumed that this would be enough.

Now they’re discovering that they’ll need some substance behind the ticket, especially after everyone and their brother has been hounding both Joe Biden and running mate Kamala Harris about their stance on “packing” the Supreme Court.

Biden this week gave his most specific answer on the subject yet…, and that’s saying something. He didn’t give an answer, but he said something.

Democratic nominee Joe Biden again dodged questions on court-packing, this time at campaign stops in Ohio on Monday, but said he is “not a fan of court packing.”

“The court packing is going on now,” Biden told WKRC Local 12 in Cincinnati. “Never before, when the election has already begun and millions of votes already cast, has it ever been that a Supreme Court nominee was put forward, has never happened before. … I’ve already spoken on, I’m not a fan of court packing, but I don’t want to get off on that whole issue.”

Biden first faced criticism on Friday when he said voters don’t deserve to know if he would attempt to pack the Supreme Court if he wins in November and Trump’s Supreme Court nominee, Judge Amy Coney Barrett, is confirmed.

If this is as far as Biden is willing to go to answer the question, then perhaps it’s imperative that pundits and the press continue pressing him on the issue.