Lying Or Dementia? Biden Claims There Was No COVID Vaccine When He Took Office (Video) 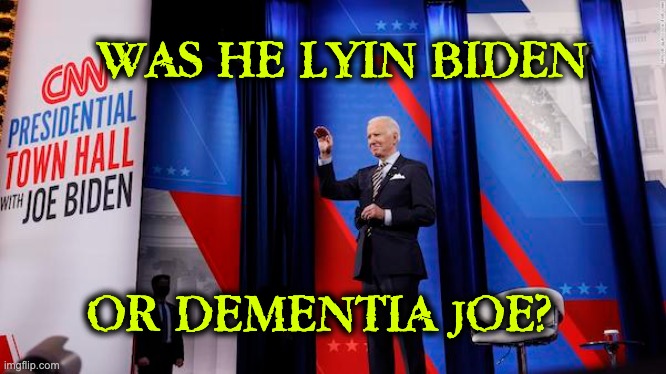 While participating in a CNN town hall event in Milwaukee on Tuesday, the titular head of the re-Bama administration, President Joe Biden, told the audience the falsehood that there was no Coronavirus vaccine available when he took office. Keep in mind he may not have been purposely lying. It might have been his creeping dementia exhibiting itself again. After all, he got the vaccine himself in December, before he took office. Biden claims no vaccine.

During the Town Hall, the feeble-minded Biden told Anderson Cooper.

“There’s just not all of a sudden 600 million doses are going to appear. What’s going to happen is it’s going to continue to increase as we move along, and we’ll have reached 400 million by the end of May and 600 million by the end of July. The biggest thing, though, as you remember, when you and I— I shouldn’t say it that way as you remember— when you and I talked last we talked about, it’s one thing to have the vaccine, which we didn’t have when we came into office, but a vaccinator. How do you get the vaccine into someone’s arm?”

Just Joe Biden saying that “we didn’t have [the vaccine] when we came into office.” pic.twitter.com/lzjRkhWQUD

Cooper is an anchor for CNN. Therefore, he didn’t bother to or wasn’t allowed to point out to Biden that Donald Trump’s program allowed the vaccines to be developed in record time. Or the fact that when Trump was POTUS, vaccines began to be administered in mid-December, and by the time he left office, 12 million COVID vaccine shots were injected, according to the Centers for Disease Control and Prevention’s vaccine tracker.

Although Biden often lies, the frightening part of his errors like the ones about the vaccine is that maybe they weren’t done on purpose but were a  result of his worsening dementia. And because supposed reporters like Anderson Cooper treat Biden with “kid gloves” and won’t fact check the President with a follow-up question–we don’t know if the country is being led by Lyin Joe Biden or Dementia Joe. Beyond disagreeing with President Biden on most issues, the fact that he is losing his cognitive ability makes the thought of him having control of the nuclear football makes me shiver.

I half expect his televised speeches to be introduced by the late Rod Serling of Twilight Zone fame:

There is a middle ground between light and shadow, between science and superstition, and it lies between the pit of man’s fears and the loss of their mental abilities. This is the dimension where a person desperately tries to hold on to a lifetime of memories while sitting in the Oval Office of the White House, it is an area engulfing a president. Joe Biden is in the Dementia Zone.

Ed Morrissey has more on the Biden vaccine claim (including a transcript) at Hot Air.