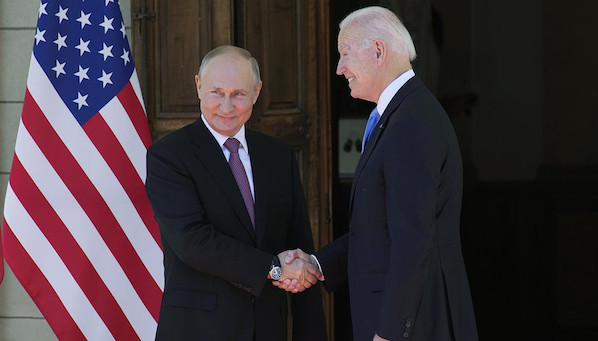 American and German officials announced an agreement Wednesday allowing the completion of a controversial natural gas pipeline between Russia and Germany, disappointing lawmakers who see the deal as another gift by the Biden administration to Russian President Vladimir Putin. Biden chooses Putin

Biden hosted German Chancellor Angela Merkel at the White House last week and stood by his decision not to sanction the company in charge of building the pipeline.

In a joint statement, Washington and Berlin vowed to counter Moscow’s efforts to use the Nord Stream 2 pipeline to “aggressive political ends by using energy as a weapon.”

Ukraine, bypassed by the project and set to be hurt financially, is upset with Biden’s equivocation, especially given Russia’s history of leveraging its natural resource advantage over its poorer neighbors. Ukrainian President Volodymyr Zelensky will visit the White House in August.

Legal Insurrection explained Thursday why other European nations are miffed:

“Most Eastern European countries bitterly oppose the project, fearful of Russia’s expansionist intentions. The memory of the Soviet occupation still looms large in these countries. They are also wary of Russians and Germans making deals behind their backs. Poland, mindful of this history, has vehemently opposed the project.  The eastern European countries had a strong ally in President Trump. The former U.S. president repeatedly warned about the security threat posed by the Russian control of the European energy supply.”

Even some Democrats expressed skepticism of the deal.

New Hampshire Sen. Jeanne Shaheen said she was “not yet convinced that this agreement — or any bilateral agreement — can sufficiently provide assurances to our European allies and minimize the considerable economic impact and security implications of this pipeline’s completion.”

The White House minimized complaints from lawmakers over the president’s decision.

“Our objective is to prevent or reduce the geopolitical impact that it was going to have,” White House Press Secretary Jen Psaki said this week.

Back in America, the Keystone XL Pipeline was canceled on Day One of the new administration to appease the radical eco-lobby.

The safe pipeline already under construction would have more than doubled our capacity to import Canadian crude oil efficiently. The oil still moves via alternative means, like trucks, trains, and barges, which create more greenhouse gasses, have a larger emissions footprint and are more apt to spill.


The permit cancellation killed tens of thousands of jobs and raised energy costs in the U.S. and Canada.

“I have been opposed to Nord Stream 2 from the beginning,” Biden said in May. “But it was almost completed by the time I took office. And to go ahead and impose sanctions now would I think be counterproductive in terms of our European relations.”