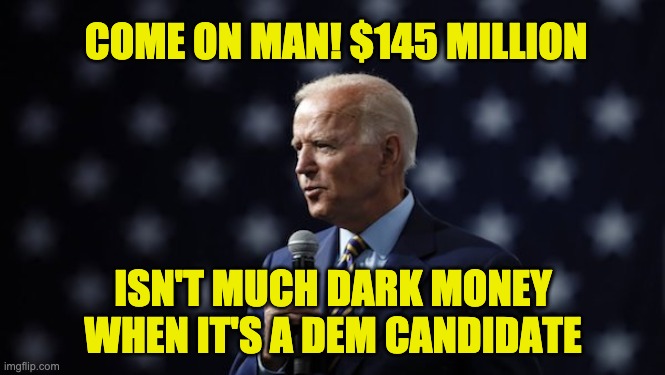 Author William Wharton once wrote, “What we all tend to complain about most in other people are those things we don’t like about ourselves.”  Biden campaign dark money

Nothing proves Wharton correct more than the Democratic Party. For years, they have complained about “dark money” donations  (donations from nonprofit groups such as social welfare, unions, trade associations that are not required to disclose their donors). The Democrats have been whining about Republican dark money but never admit to their own. And in this most recent Presidential election, Joe Biden set a new dark money record.

Joe Biden had a whole lot of this clandestine cash.

A report published by Bloomberg News shows that Biden raked in about $145 million in donations from anonymous donors to outside groups backing him, far outstripping the $28.4 million spent on behalf of his rival, former President Donald Trump. It also tops the previous record of $113 million in dark money donations spent on behalf of Republican presidential nominee Mitt Romney in 2012.

For instance, Priorities USA Action Fund, one of the most prominent Democratic super PACs supporting Biden, used $26 million in funds originally donated to its nonprofit arm, called Priorities USA, to back the then-candidate, according to Bloomberg. The donors of that money do not need to be disclosed.

Critics of dark money, which obscures the source of the funds, argue that voters should know who’s funding political advertisements and campaigns. The Campaign Legal Center, a nonpartisan group, has called it a “serious threat to our democracy,” and Issue One, another nonpartisan group that aims to reduce the influence of money in politics, has called it “the most toxic force in politics.”

The way cancel culture works today if disclosure of donors was required, Republican donors would be harassed and their businesses destroyed. And while Democrats certainly talk the talk about getting “dark money” out of politics, they are definitely not walking the walking, especially the Biden campaign.

Parts of this post was first seen at Liberty Hub