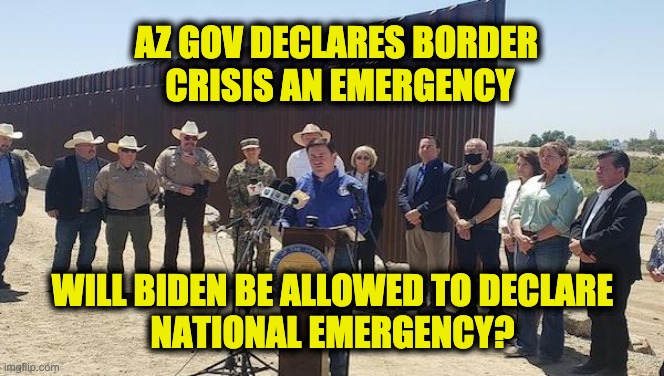 The Biden Administration must be loving all this attention being given to Chauvin, policing, and racism — it gets people talking about something besides those colossal failures at Biden’s Broken Border. But the Governor of Arizona is not interested in letting Joe change the subject because, for Gov. Ducey, the border problem is getting worse, not better. And that is hurting people in his home state.

The governor proclaimed that Biden is totally divorced from reality. Perhaps it’s above his pay grade. Biden struggled with addressing the phrase ‘crisis,’ and when he finally used the word, his SPOX said he misspoke because that wasn’t his government’s policy. Wait! he is the President, isn’t he supposed to be setting his administration’s policy?  Maybe he’s not setting policy—he’s following policy.

Now let’s see how well dementia Joe handles ‘national emergency,” but based on Psaki’s comment, is Biden is even the decision-maker.

Ducey has declared a state of emergency at the border. However,  he wants Biden to call a Federal State of emergency, unlocking the resources that can be brought to bear under SOE provisions.

“President Biden, if you want to stop the disaster that’s unfolding here and will only get worse, President Biden, you should declare a national emergency and deploy the vast powers of your administration to stop what’s happening here,” said Ducey, a frequent critic of the commander in chief.

…Ducey took aim at the Biden administration’s decision to halt construction of the border wall, but called on the president to work with the state to address the humanitarian crisis.

“I am going to support the federal government and the administration,” he continued. “We want to partner with them. So I am saying we are here in good faith to partner with you. This is federal land. This is a federal responsibility,”

It wasn’t political posturing, either. One day earlier, he called a state of emergency, sending the National Guard to bolster the CBP efforts to keep people from flowing, unimpeded, across the border.

From a press release, the previous day:

The situation in our border communities is just as bad—if not worse—than the coverage we’ve been seeing,” the Governor stated. “It’s become evidently clear that Arizona needs the National Guard, and the White House is aware of that. Yet, to this day, there has been no action from this administration, and it doesn’t look like they are going to act any time soon. If this administration isn’t going to do anything, then we will.”

Under the leadership of the newly appointed Adjutant General and Director of the Arizona Department of Emergency and Military Affairs Brigadier General Kerry L. Muehlenbeck, up to 250 Guardsmen will go to border communities and will be available to support other law enforcement agencies, like state troopers. The Arizona National Guard will:

Monitor and collect data from public safety cameras; and

“The dedicated members of the Arizona National Guard stand ready to support our local law enforcement partners as they address border security, just like we have done for many years when called upon,” said Brigadier General Kerry L. Muehlenbeck. “Our guard members will tackle a wide range of tasks including medical operations, camera maintenance and monitoring, data analysis, and logistics and administrative support to local sheriffs. I am proud of the men and women of the Arizona National Guard for their commitment to serving and protecting our state, all while they balance federal requirements and full-time civilian commitments. I am grateful for all they do to keep Arizonans safe and for the many employers who continue to support them.”

U.S. Customs & Border Protection in March had more than 170,000 apprehensions at the Southwest border. Nearly 19,000 of those apprehensions were unaccompanied children — more than four times the number of kids apprehended in March 2020.

“The crisis at the border is serious and cannot be taken lightly,” said Yuma County Sheriff Leon Wilmot. “The Arizona National Guard will provide much-needed support to our officers and safety officials, and will help ensure Yuma and other border communities are further protected from dangerous and illegal activity. By deploying National Guard assets, the Governor will allow me to deploy more first responders to mission critical tasks where we will work side by side with our federal partners to target, apprehend and prosecute transnational criminal organizations. My thanks to the Governor for taking action to protect Arizonans, law enforcement and legal immigration.”

Sheriff Wilmot shouldn’t hold his breath.  While it is likely that Governor Ducey will continue to do his best to stem the tide of illegal aliens from coming into the state, it is doubtful that President Biden will intervene. The ‘not our policy’ reaction to his using the term ‘crisis’ indicates he does not even set the policy of his administration. Even if he wanted to stop the border crisis, it seems as if he is not the decision-maker.  Either Biden or the leftists who seem to make the decisions are happy with the foreign invasion.

The bottom line is Arizona shouldn’t expect help from DC–the Grand Canyon state is on its own.

The day after declaring the emergency at the border, Governor Ducey visited the border: