CLAIM: China Played Biden And Obama ‘Like A Stradivarius’ 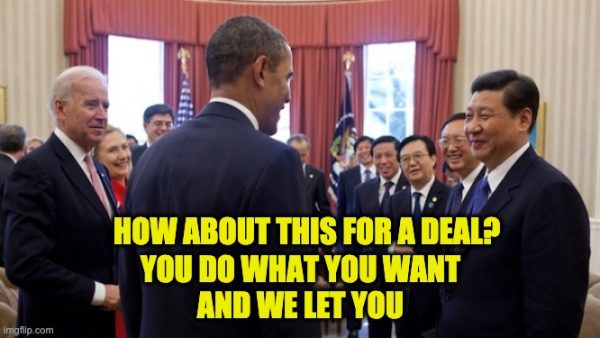 The Memorandum of Understanding was supposedly a meeting of the middle hasn’t been honored by China — at all. And US investors have been badly burned.

Why should China’s companies get easier access to our markets than American firms?

The Republican Senate is pushing a bill to fix a problem hanging over our heads from the Obama years.

The Senate has passed a bipartisan measure that could prevent several Chinese companies from participating on the U.S. stock exchanges if they fail to amend their standards in accordance with U.S. audits and regulations.

The legislation, which was passed Wednesday by unanimous consent, was championed by Sen. John Kennedy, a Louisiana Republican, and Sen. Chris Van Hollen, a Maryland Democrat. The bill, if signed into law, would require public companies to disclose whether they are owned or controlled in any capacity by a foreign government.

The bill, titled the Holding Foreign Companies Accountable Act, would bar companies from being listed on any U.S. securities exchange if they have failed to meet the U.S. Public Company Accounting Oversight Board’s audits for several years in a row.

It might interest our readers to note that the Memorandum of Understanding happened the very same year that Biden’s son Hunter flew to China on Air Force 2 and scored that big deal with China’s investment people. That’s probably nothing, though, right?

Here’s the Memorandum of Understanding deal Solomon was talking about:

Since 2013, Chinese companies have been allowed to participate in U.S. stock and bond exchanges without having to fully comply with the same Sarbanes-Oxley Act accounting practices and risk disclosure required of American companies.

The concession was made in a little-noticed Memorandum of Understanding executed seven years ago by the Public Company Accounting Oversight Board (PCAOB), a nonprofit regulator empowered by the Sarbanes-Oxley law to ensure U.S. investors are protected from making bad investments because of faulty audits or financial information.

The agreement was reached in May 2013 after Chinese leaders pleaded for improved access to American capital markets in multiple meetings with then-Vice President Joe Biden, transcripts from the Obama administration’s archives show.

Now seven years later, the PCAOB and its parent Securities and Exchange Commission have allowed the agreement to continue despite their own warnings that China has not been complying with the MOU and has left global investors, including Americans, with potentially risky investments totaling as much as $1.9 trillion.

“We remain concerned about our lack of access in China,” the PCAOB said in a recent statement. “….Unfortunately, since signing the MOU in 2013, Chinese cooperation has not been sufficient for the PCAOB to obtain timely access to relevant documents and testimony necessary to carry out our mission consistent with the core principles identified above, nor have consultations undertaken through the MOU resulted in improvements.”

What does this mean for Americans?

Are there sanctions against any of the board members? We don’t know. Are there any accounting irregularities, or areas of severe financial risk? Are the numbers presented to shareholders a deliberate lie?

We have no way of knowing until it’s too late — like it was with the collapse of Luckin Coffee. They were kicked off of Nasdaq for fraud. And they were explicitly exempt from the safeguards that would have protected US investors from this loss. Luckin Coffee soaked Wall Street investors for half-a-billion in a bid to become China’s next Starbucks, claiming they had a $12Billion valuation when in fact, they had pulled the numbers for their 2019 balance sheets out of thin air.

Biden was so eager to have China participating in our economy that he agreed to give them access without an obligation for their companies to provide audit info. And even the half-ass meet-you-halfway measures of accountability were never honored by China in the last seven years.

This was evidence of Biden’s judgment when he still had half a brain.

Can you even imagine what damage he might do if he were elected now?

The question we’re left with is this — with the Hunter Biden involvement around the same time, was this MOU deal with China evidence of Joe’s incompetence or his corruption?