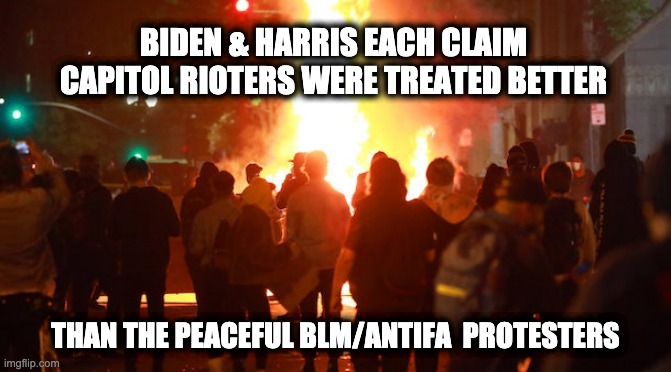 Here we go again, back to the bad old days of Barack Obama.  Joe Biden and Kamala Harris have turned the Capitol Police response to Wednesday’s riot at the Capital building into a race issue–madness. These two, who will be running the country soon claimed the capitol police and saying were easy on the rioters because of their skin color. If the rioters were the mostly minority Antifa/BLM from the summer they would be treated differently.

Both Harris and Biden were senators. They should know that the Capitol building is almost impossible to guard because of its many entrances. Nevertheless, the Capitol police acted valiantly.  They were overwhelmed by protesters, with crowds estimated to have been in the tens of thousands at one point.  A small number of these demonstrators turned violent, smashing windows and doors. The police’s first responsibility is to protect the members of Congress, and that’s what they did. Despite the fact they were outnumbered, the Cops did their best to protect the building after getting the Members and their staff inside the building to safety.

But instead of thanking the Police for their valiant efforts, the President-elect and the VP-elect claimed the rioters got off comparably easy because of race.

We have witnessed two systems of justice: one that let extremists storm the U.S. Capitol yesterday, and another that released tear gas on peaceful protestors last summer. It’s simply unacceptable.

For centuries, justice has been symbolized as a woman, blindfolded, a scale in her hands.

Her eyes are covered because justice shouldn’t depend on the color of your skin.

It shouldn’t depend on how much money you have.

Justice should be impartial. Our DOJ will ensure it is.

No one can tell me that if it had been a group of Black Lives Matter protestors yesterday that they wouldn’t have been treated very differently than the mob that stormed the Capitol.

We all know that’s true — and it’s unacceptable.

Neither the rioters nor the Police got off easy on Wednesday. One Capitol Policeman and Four protesters were killed.  One rioter was shot dead by a Capitol cop when she was tried to enter the building through a window and refused to stop. The policeman died from brain injuries after being hit on the head with a fire extinguisher. Eighty-three protesters were arrested, and the DC cops have asked the public to help find the rest.

Were Wednesday’s rioters treated differently than the BLM/Antifa riots during the Summer? Yes, some of the summer rioters got off much easier.  They were allowed to occupy their targets, like the Antifa group allowed to take over six square blocks of Seattle in June.  Antifa was permitted to occupy that area with no interference for a month before the mayor allowed the police to clear the area out. During the “occupation,” two of the Antifa members were shot by other Antifa members, and they stopped the Seattle police from rescuing the victims for hours.

Wednesday’s rioters were prevented from occupying the Capitol. 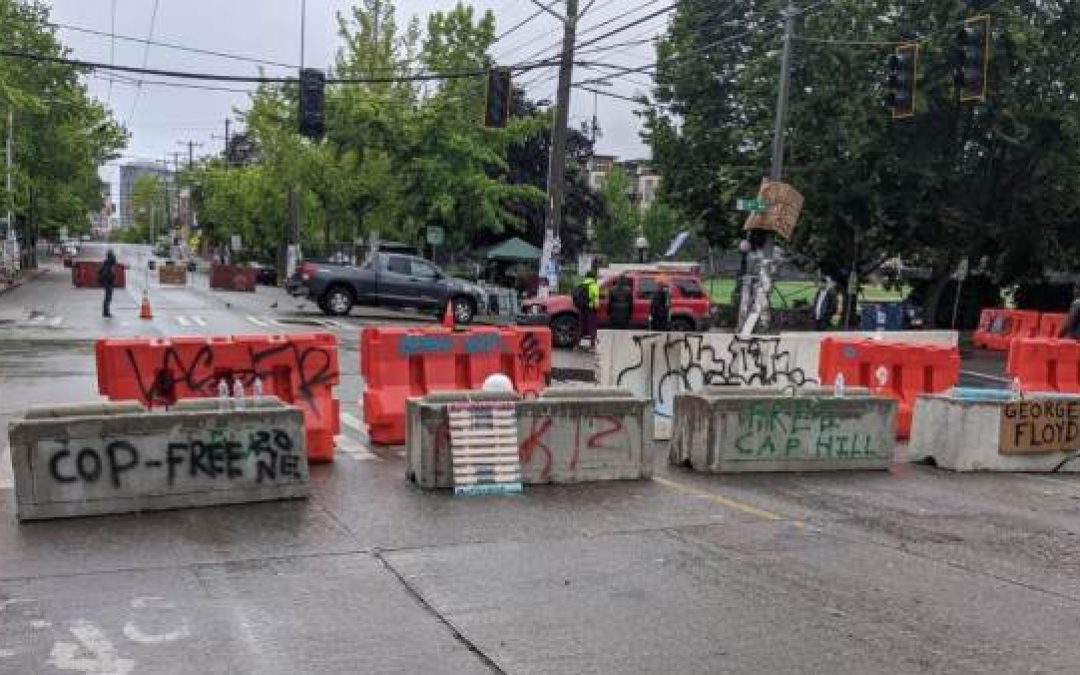 Perhaps Biden and Harris’ poor choice of words was made because they were fooled by the fake mainstream media reports. Toeing the liberal line, many of the MSM reports called the summer riots peaceful protests as cities burned beyond them. Reports like the one from MSNBC reporter Ali Veshi did his best Leslie Nielsen impersonation, assuring viewers that “protests” in Minneapolis have not become “unruly,”… all while standing in front of a building burning thanks to what he described as not unruly protests.

MSNBC reporter just now: "I want to be clear on how I characterize this. This is mostly a protest. It is not generally speaking unruly."

The guy is literally standing in front of a burning building in the middle of a riot. pic.twitter.com/IzCV6On4sF

Tear Gas? Are they talking about the use of Pepperballs to disperse the riot at Lafayette Park in DC on June 1st?  The supposedly peaceful protest, which resulted in injuries to US Park Police (USPP) officers in the line of duty, the destruction of public property, and the defacing of memorials and monuments?  During those four days of ‘peaceful” demonstrations at the park, 51 members of the USPP were injured; of those, 11 were transported to the hospital and released, and three were admitted.

Finally on June 1st ” At approximately 6:33 pm, violent protestors on H Street NW began throwing projectiles including bricks, frozen water bottles and caustic liquids. The protestors also climbed onto a historic building at the north end of Lafayette Park that was destroyed by arson days prior. Intelligence had revealed calls for violence against the police, and officers found caches of glass bottles, baseball bats and metal poles hidden along the street.”

“To curtail the violence that was underway, the USPP, following established policy, issued three warnings over a loudspeaker to alert demonstrators on H Street to evacuate the area. Horse mounted patrol, Civil Disturbance Units and additional personnel were used to clear the area. As many of the protestors became more combative, continued to throw projectiles, and attempted to grab officers’ weapons, officers then employed the use of smoke canisters and pepper balls. USPP officers and other assisting law enforcement partners did not use tear gas or OC Skat Shells to close the area at Lafayette Park. Subsequently, the fence was installed.”

What would Biden and Harris suggest? Perhaps the USPP should have pasted targets on their head to help the “peaceful” protesters.

There are so many more examples of the violence that led to the use of teargas or pepper pellets, media mislabeling violent protests as peaceful, and Antifa/BLM protesters being allowed to occupy or protest at will. To list them all would take up too much space.

Biden and Harris promised to be the President and VP of all the people. Their tweets regarding Wednesday’s capitol riot proved the “all the people” promise was just campaign bull! Just like the Obama administration and today’s leftist Democratic Party, the Biden-Harris administration will be racially divisive, finding a racist angle to almost everything, even when it has nothing to do with race.