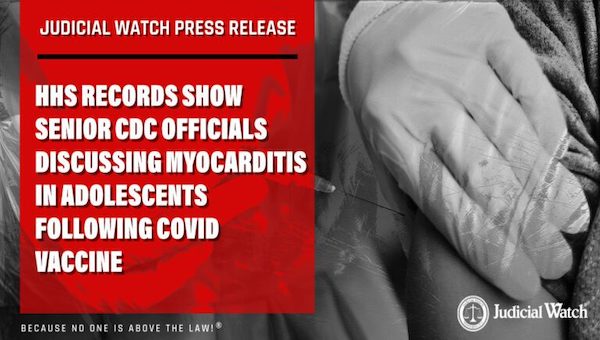 These emails were generated before the vaccine mandates came out, but it took a court order to make the government finally release them.

Judicial Watch is still on the case with questions about how the Biden administration has handled decisions about COVID.

You might hope that a party whose chant was ‘believe the science’ would be humiliated by examples of evidence like this being suppressed.

Worse yet, if you consider the timeline, we’re seeing that Federal pushes to make vaccines mandatory in government positions and in the workplace came AFTER risks about dangerous side effects were already a known issue being discussed among decision-makers.

At what point did our experts in labcoats decide that the core medical principle of Informed Consent could be disposed of in the interest of political expediency? Because that’s what the emails Judicial Watch appear to show.

Here’s Tom Fitton explaining the situation in his own words:

He opens with the following sentence: ‘We have new records from HHS — that show senior CDC officials were discussing Myocarditis in adolescents following the COVID vaccine.

They had sued for records under the Freedom of Information Act when the FDA refused to respond to a request for all emails sent to and from members of the Vaccines and Biological Products Advisory Committee regarding adverse events, deaths, or other injuries caused by investigatory vaccines for the prevention or treatment of Sars Covid 2 or COVID-19 currently produced by Pfizer, BioNTech, Moderna, or Johnson & Johnson.

This is the same body that just voted to put the vaccines on the recommended vaccine schedule for school-age children.

On May 13, 2021, a senior CDC director, Dr. Amanda Cohen, from the division of Birth Defects and Infant Disorders, wrote an email about Myocarditis in adolescents.

Skipping ahead to the 4-minute mark, citing from an FDA briefing document submitted by Johnson & Johnson’s partner, Jansen, Fitton tells us: 5 people have experienced severe adverse events, selected events from among vaccine recipients for which a contributory effect of the vaccine could not be excluded based on FDA assessment of the clinical information provided.

The same briefing document has a section on pregnancy noting that four women who became pregnant following the Jansen shot lost two babies, one due to an ectopic pregnancy and the other due to spontaneous abortion.

The safety study section of the briefing notes numerical imbalances between adverse effects noted in vaccine recipients and those who received a placebo.

This is just a taste of more than 1000 documents that have been released — only after a judge forced them to comply — since they were first requested in August of 2021.

Why would the Biden administration want to suppress information vital to the public interest about what risk factors must be considered while weighing the risk-reward factors about their own medical situation?

Will we get any good answers?

No. Not so long as the administrative state gets to keep playing rope-a-dope with impunity