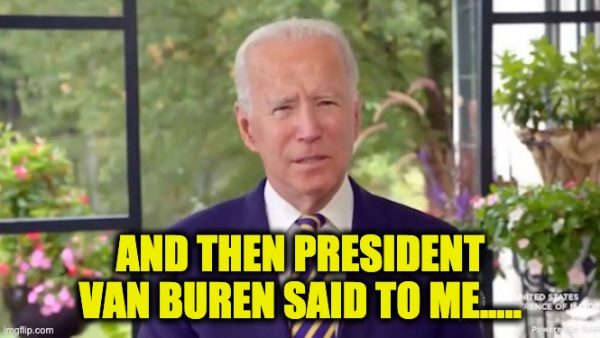 You know a candidate is in trouble when he makes a time-line joke and people wonder if it’s a joke or his dementia. Biden 180 years ago

2020 Democrat presidential nominee Joe Biden is 77-years-old. On more occasions than can be remembered, he has shown the American people he is unfit to be POTUS.

But does Joe now think he’s 257, considering he “got to the Senate 180 years ago?” He made the statement during a live video address to the US Conference of Mayors.

Hmm. Was this another brain freeze? I think it’s a joke, he giggled when he said it. But with Biden failing mental facilities, how can we be sure. Perhaps Dementia Joe gave the 180-year response and realized it was wrong as he said it and giggled out of embarrassment.

Notorious agrees with me.

Pretty sure he was joking. But the fact that you have to think about it tells you all you need to know.

JMY pointed out something I missed:

He seemed pretty serious about his “10 years as Vice President…”

But he may have just been rounding.

That would’ve been in 1840, when Martin Van Buren was President. There were 52 Senators at the time, and the Democratic Party controlled the chamber, with a Whig minority in opposition. Biden was talking about supporting first responders and firefighters, who would’ve existed in a vastly different capacity in the mid-19th century.

That makes it impossible. In 1840 Ukraine was basically a rural country, and Hunter couldn’t have made those millions he got from Burisma, and I doubt he could get the same cash from the Qing dynasty in the late 19th century as he gets from the Communists today.  And Based on Biden’s history of racism, he would have been on the wrong side of the Civil War.

180 years in government and still nothing but corruption to show for it.

Before you decide that Biden was joking, take a look at this clip where he has to be told what he was thinking.

WATCH: After Joe Biden's brain freezes, MSNBC anchor has to feed him a line pic.twitter.com/pymKXjlqhf

Was the 180 years line a joke? Most probably—but with Biden’s mental maladies, can we be totally sure?