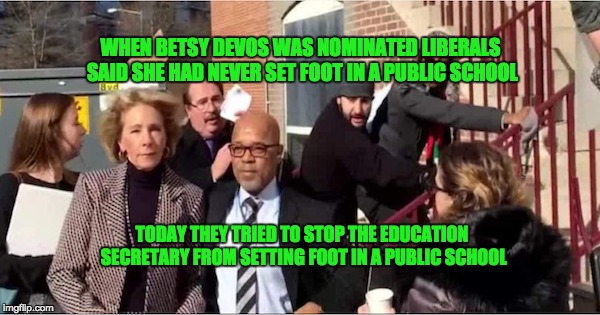 Remember when the liberals protested the nomination of Betsy DeVos because they said she had never set foot in a public school? On Friday Morning a mob of unruly liberals barred the way as new Education Secretary Betsy DeVos tried to enter a Washington, D.C. area public. Not only was this action disrespectful but the liberals really should make up their minds.

The disrespectful mob refused to allow her entry, blocking her path each time she tried to step around them. Eventually, DeVos made her way inside for an event starting at about 10 a.m. that included the D.C. schools chancellor and others. The event was closed to the media.

When DeVos left the event one of the protesters followed her shouting “Go Back! Shame, shame!”

Just heard a protester blocked & almost knocked Secy @BetsyDeVos down at Jefferson.We don’t condone such acts.We want her to go to pub schls

Even President Obama’s Secretary of Education, the liberal Chicago educator (who has failed to improve schools at every level he’s ever been) couldn’t understand why the protesters would block DeVos.

Agree or disagree w @BetsyDeVos on any issue, but let’s all agree she really needs to be in public schools. Please let her in.

And the Mayor of Washington, D.C. begged the protesters to stop acting in a manner that is obviously not helpful.

DC has the fastest growing urban school district in America. We welcome @BetsyDeVos & anyone who wants to learn more about our schools.

The protesters held signs that said things like “We love our public schools,” and “Support ALL Students.” Has anyone ever heard DeVos or President Trump ever utter anything in opposition to either of these statements? I think not

Don’t we want the Sec of Education to visit schools? https://t.co/3PVirgMzJQ

The truth is that DeVos has spent the last several decades of her life working to improve the education of the children in Michigan, and President Trump spoke specifically to the poor and underserved on education during the campaign. Both DeVos and Trump have spoken only of improving the education opportunities for every child in America, particularly those trapped in failing schools. Schools, that have been failing for years and under Democrat leadership have only gotten worse.

These “protesters” are fools. They are fools because they think showing up to upstage the Secretary of Education will help their cause. Millions of parents across the nation understand the truth, these protesters fear Betsy DeVos because she is a departure from the education status quo. How will the unions be able to rake in their millions if the Trump administration and the GOP end up supporting and encouraging school choice? How can they keep their power over poor families, if those families can use vouchers to get their children into better performing schools? How will they indoctrinate our children in the ways of big government solutions, if those kids learn first hand that the private sector does EVERYTHING (literally EVERYTHING) better than the public sector?

In fact, notable socialist Elizabeth Warren (D-MA) once said something very interesting (and very true) about the state of public education in America and the NEED for school choice.

From Warren’s book “the Two-Income Trap”:

An all-voucher or all-school choice system would be a shock to the educational system, but the shake out might be just what the system needs…But over time, the whole concept of “the Beverly Hills schools” or “Newton schools” would die out, replaced in the hierarchy by schools that offer a variety of programs that parents want for their children, regardless of the geographic boundaries. By selecting where to send their children (and where to spend their vouchers), parents would take control over schools’ tax dollars, making them the de facto owners of those schools.