Beto O’Rourke Sticks To His Guns…And Take Away Yours 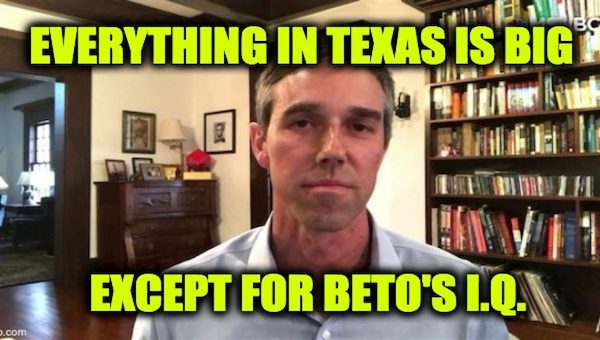 In an interview with CNN, O’Rourke doubled down on his previous vows. He stated, “Look, we are a state that has a long, proud tradition of responsible gun ownership, and most of us here in Texas do not want to see our friends, family members our neighborhoods shot up with weapons of war.”

“So, “yes,” he continued, “I still hold this view, but I also have been listening to my fellow Texans who are concerned about this idea of permitless carry that Greg Abbott has signed into law,  Which allows any Texan to carry a loaded firearm despite the pleadings of police chiefs and law enforcement from across this state who said it would make their jobs more dangerous.”

Then, reacting to the verdict in the Kyle Rittenhouse case in Wisconsin, Beto dug the hole a little deeper by stating, “This entire tragedy makes the case that we should not allow our fellow Americans to own and use weapons that were originally designed for battlefield use. That AR15 that AK47 has one single solitary purpose and that is killing people as effectively, as efficiently in as great a number in as little time as possible.”

HOWEVER, the AR-15, a civilian lookalike of a military rifle, is not designed for battlefield use. It was designed for a generation of shooters looking for a lightweight, semi-auto rifle that can be used for varmint and predator hunting, home defense, competition, and recreational shooting.

According to Fox News, O’Rourke appeared on CNN’s “State of the Union” program on Sunday.

In September 2019, during a debate in Houston among Democrat candidates for the party’s presidential nomination O’Rourke blurted the now-infamous promise, “Hell yes, I’m going to take your AR-15s and AK-47s.” He may have gotten roaring applause from the debate audience, but that essentially ended his campaign. Especially after future congresswoman Lauren Boebert showed up at a campaign stop and made him look foolish. And don’t forget that it was Democrats rejecting O’Rourke’s candidacy.

Now he’s back on the campaign trail again, seeking public office in what is starting to look like a career intent on collecting some form of a government salary. As an anti-gun governor of Texas?

Will O’Rourke’s position hold up in the Lone Star State? Was he talking to Texans or all the transplants who have moved there, fleeing places like California, New York, and other high-tax states run by liberals? Many Texans believe the biggest problem with those coming from liberal states is they bring their liberal politics with them.