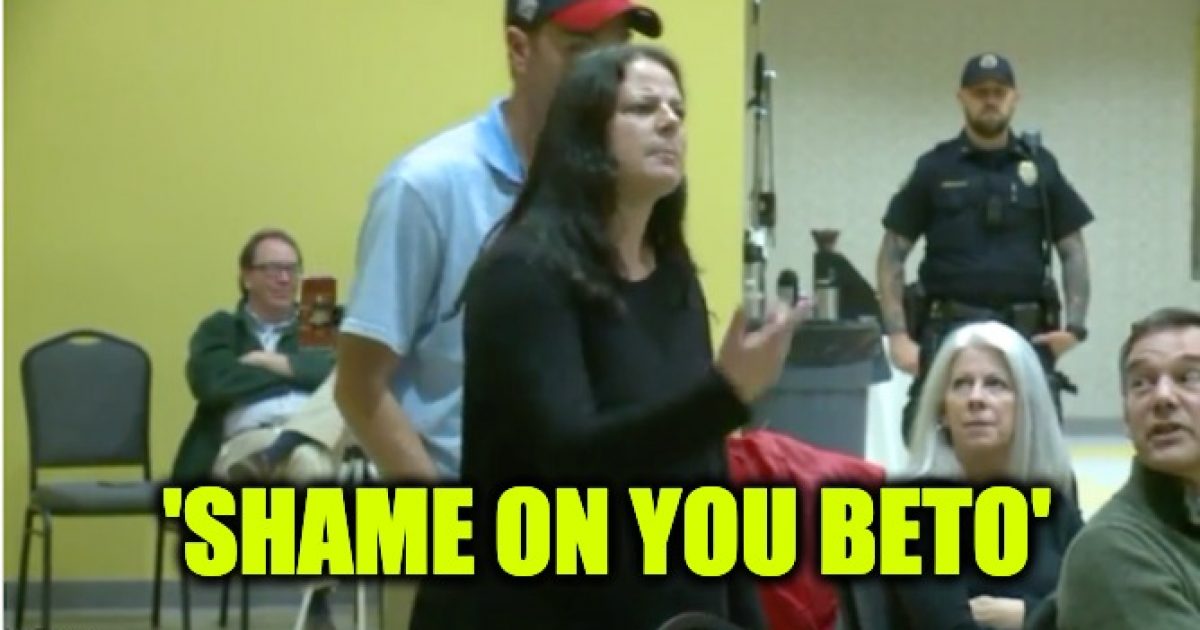 For the second time, would-be gun-grabbing Democratic presidential candidate Beto O’Rourke was confronted at a  stop of his campaign tour to towns that suffered a tragic mass shooting. This time it was Newtown, Conn. the scene of the tragic 2012 Sandy Hook shooting.

As he was giving his stump speech, he got an earful from Rebecca Carnes, a believer in the Second Amendment who was not too happy with O’Rourke’s ‘Hell yes, I’m going to take your AR-15s and AK-47s.’   Ms; Carnes gave O’Rourke an expletive-laced tongue lashing, declaring that the former Texas congressman was in Newtown to “hijack” the community “and to try to make an issue out of getting guns out of good peoples’ hands that can make a difference. This is bullsh*t” Carnes continued. “It’s about mental health and it’s about this war on boys and masculinity. You’re bullsh*t for being here. Shame on you, Beto”

“The Democrats have been in charge of urban communities and cities for decades,” said Carnes. “The Democrats have failed. They don’t care about you, sir. That’s why he’s at Sandy Hook. He doesn’t care. It’s bullsh*t.” She continued with “Trump 2020! He’s saving this world! You guys are corrupt liars and you know it, Beto!” And the crowd started booing her.

O’Rourke’s gun control extremism became a campaign issue two months ago when, during a candidates’ debate, he declared, “Hell, yes, we’re going to take your AR-15, your AK-47.” The comment caused a considerable amount of Democrat’s teeth grinding, especially when none of the other candidates on stage said anything to reject O’Rourke’s threat.

This was the second time O’Rouke was confronted at a stop on his cynical campaign tour of places that had gun tragedies, In September, Lauren Boebert confronted Beto O’Rourke at a town hall in Aurora Colorado, “I was one of the gun-owning Americans who heard you speak regarding your ‘Hell yes, I’m going to take your AR-15s and AK-47s.’ Well, I’m here to say, ‘Hell no, you’re not.’”

Beto’s promise to take away people’s firearms not only breaks the Second Amendment of the Constitution, but the Fourth Amendment guarantees against illegal search and seizure.

Lauren Boebert and Rebecca Carnes correct in their confrontation of Beto, the only surprising part is that others don’t have the guts to personally confront O’Rourke and his unconstitutional proposal