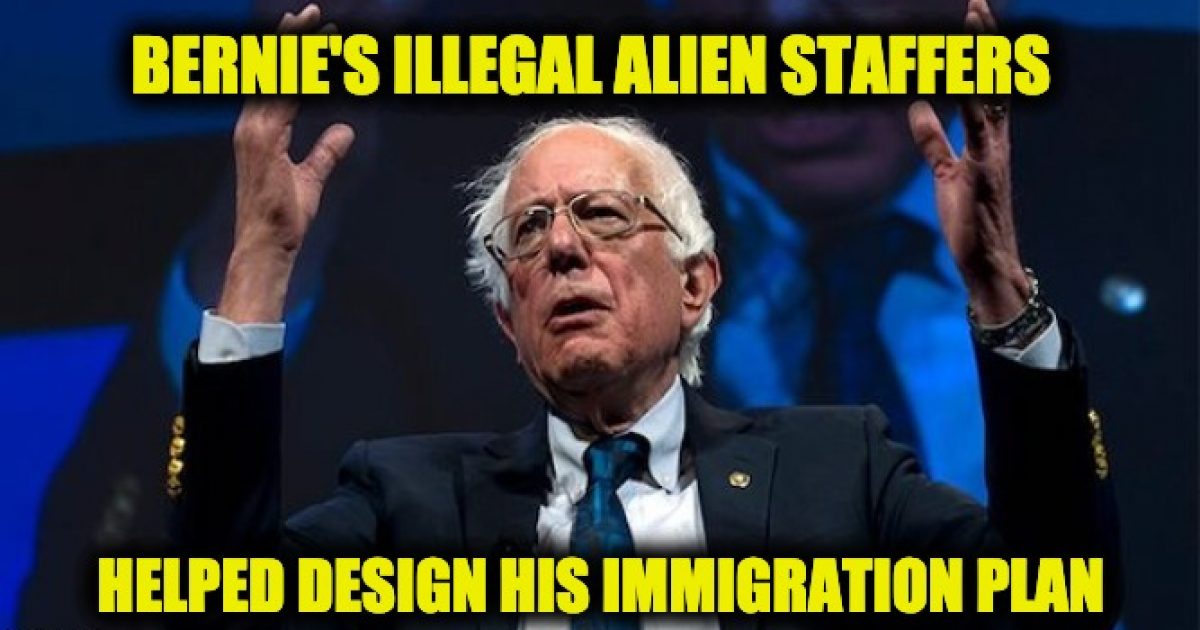 Bernie Sanders never runs out of terrible ideas. At the CNN climate town hall, he advocated American Taxpayers fund mass abortions in third world countries as a solution to climate change. Perhaps we should celebrate that he didn’t call for humans to eat other humans, as did a Swedish Scientist.

Earlier this week, Bernie Sanders’ deputy press secretary, Belén Sisa announced that the campaign will soon release an immigration plan. (Sorry, but to me, a dreamer is a person in REM sleep). The plan was partially designed by Bernie’s illegals, three employees who are in the United States Illegally.

“We know that we can do better and I think that’s the greatest part of all is that we have people who are experiencing these struggles that are taking part in that plan,” Belén Sisa, who is also a DACA recipient, told Hill.TV on Tuesday.

She said the campaign expects to release its immigration plan “soon,” but did not specify a release date.

Sisa touted the campaign’s efforts to recruit more volunteers and senior level staffers from the Latino community through outreach that includes webinars in Spanish for people who want to get involved but can’t speak English.

Bernie’s campaign page has vowed not only to grant amnesty to ‘Dreamers’ but wants to expand who qualifies for said amnesty, unleashing millions of illegals who will cut in front of migrants who are doing it the right way and will vote for Democrats.

“We need to … Expand DACA and DAPA, including providing immediate legal status for young people eligible for the DACA program,”

Sanders also seeks to close down all migrant holding centers because of the “barbaric practice of family separation and detention of children in cages.”

“Bernie will order an immediate moratorium on private immigration detention centers and immediately begin the process of closing them,” Sanders’ spokeswoman Sarah Ford told Fox News in an email. “He will order a review of the standards for facilities that house children and immediately connect children to sponsors and supports.”

Ford added that Sanders would also “authorize and expand the use of community-based alternatives to detention that connect immigrants to health care services, legal counsel, and work opportunities.”

“Bernie will end detention for families, children, and non-violent immigrants,” she said.

That sounds like the liberal dream of open borders to me.

Sanders has repeatedly railed against the President for supposed lies about the border wall, even though Trump’s been proven to be truthful, including the terror threat and the opioid threat.

Sisa, meanwhile, also takes offense at family separations at the border. She blames Trump, but in 2015 she was featured with others on Sander’s campaign page called Latina & Latino Millennials For Bernie. The page said in part, Bernie would be “a President who will stop the separation of our immigrant families.”  Correct me if I am wrong but wasn’t Barack Obama president in 2015?

She was also seen at a family separation protest in 2015.

This is Sen. Bernie Sanders illegal immigrant Press Secretary Belen Sisa fighting against family separation in 2015. Wait who was president in 2015? You mean that policy did not start with President Donald Trump? pic.twitter.com/w0BrrS4xAw

While she and the other REM sleepers may help craft Bernie’s plan, they won’t be able to cast a vote for the candidate they work for.

“Even though I can’t vote, I can get 200 people to vote, and that matters,” Sisa said during the previous presidential election. “Everything can change depending on who becomes the next president.”

Indeed. If Bernie wins, you’ll have open borders policies crafted by illegals, and the economy declines into a socialist hell. Is he also going to hire members of ISIS to design his counter-terror program? He also has a hater of Israel, James Zogby advising him on the Middle East.

Perhaps Bernie Sanders believes he is still in day camp and every day is opposite day.