They Go Low: Bernie Slams Trump With Every Name In The Book (Video)

He Should Change His Name To Bernie Slanders 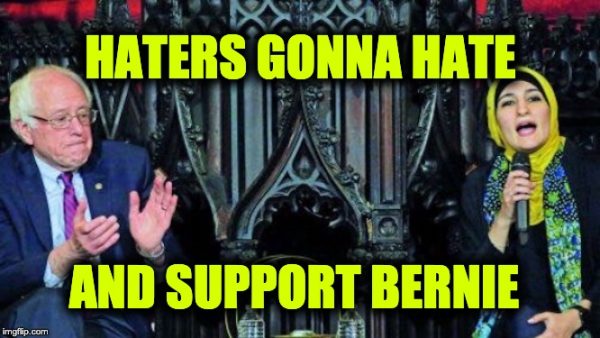 Bernie slammed President Trump with almost every word meaning bigot. Before Bernie does it again he might want to check to see what happened when Marco Rubio tried the name-calling approach in battles with Trump. Bernie Slams Trump

Besides, where was this ‘fire in his belly’ when he was up against Hillary? If he’d come out swinging against her, he’d have already had his turn to be defeated by Trump back in ’16.

Let’s see what Mr. ‘old man yells at cloud’ has to say about Trump this time.

Will he at least take the time to trot out an interesting insult or accusation? Or was he going for the same tired old cheap shot?

In 30 seconds, Bernie Sanders smears President Trump by calling him every name in the book

All Bernie does is stoke division and preach class warfare

In this one 30-second clip, somebody’s SJW bingo card is already full.

Well, at least he didn’t call Trump an anti-Semite. I guess that’s because it would spring back at and slap him in the face. After all, on his campaign staff, Bernie has anti-Semites like Linda Sarsour and James Zogby.

This isn’t the mark of intelligent conversation, it’s the mark of mindless repetition of empty partisan talking points.

And as far as ‘religious bigot’ goes, Does Bernie really think we all forgot the time when Bernie tried to disqualify a Trump appointee because of his personal religious convictions about heaven and hell?

Does he have anything to say about the open bigotry among his own surrogates in ‘the squad’?

His other accusations are just as ridiculous.

Trump’s policies are making such a difference in the lives of Americans that minority voters who have voted Dem for generations are starting to view Republicans as a viable alternative.

Whether he’s ‘homophobic’ or not is a question you might want to throw over to Peter Thiel or Ambassador Richard Grenell, who is currently in the middle of an international push to decriminalize homosexuality.

But go ahead and throw around unsubstantiated personal attacks.

That strategy worked out so very well with Hillary.