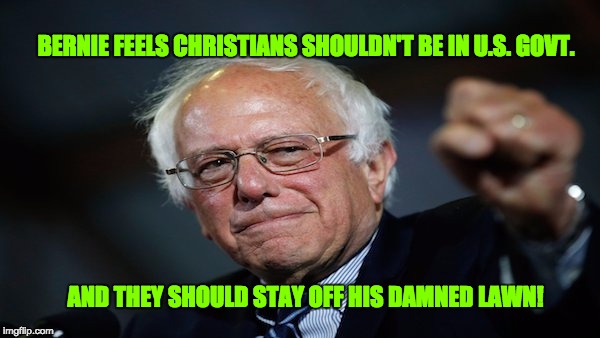 Ladies and gentlemen, the title is not hyperbole. Bernie Sanders’ behavior shouldn’t be a surprise, after all he is a socialist and Karl Marx did say that religion is the opiate of the masses.

On Wednesday, President Trump’s nominee to be Deputy Director of the White House Office of Management and Budget, Russell Vought, appeared before the Senate Committee on the Budget. The committee is supposed to vet Mr. Vought to ensure that he is qualified for the position and prepared to do the job. Sadly, instead what occurred was an unconstitutional dressing down of a patriotic American whose closely held personal religious beliefs were assaulted by a US Senator.

Not just any Senator either. Senator Bernie Sanders (I-VT) who was a breath away from being the Democrat nominee for President spent a couple of minutes attacking Vought’s religious beliefs before he declared that people like Vought (Christians) did not belong in the government.

I kid you not. Watch:

Sanders: Let me get to this issue that has bothered me and bothered many other people. And that is in the piece that I referred to that you wrote for the publication called Resurgent. You wrote, “Muslims do not simply have a deficient theology. They do not know God because they have rejected Jesus Christ, His Son, and they stand condemned.” Do you believe that that statement is Islamophobic?

Vought: Absolutely not, Senator. I’m a Christian, and I believe in a Christian set of principles based on my faith. That post, as I stated in the questionnaire to this committee, was to defend my alma mater, Wheaton College, a Christian school that has a statement of faith that includes the centrality of Jesus Christ for salvation, and . . .

Sanders: I apologize. Forgive me, we just don’t have a lot of time. Do you believe people in the Muslim religion stand condemned? Is that your view?

Vought: Again, Senator, I’m a Christian, and I wrote that piece in accordance with the statement of faith at Wheaton College:

Sanders: I understand that. I don’t know how many Muslims there are in America. Maybe a couple million. Are you suggesting that all those people stand condemned? What about Jews? Do they stand condemned too?

Sanders: You think your statement that you put into that publication, they do not know God because they rejected Jesus Christ, His Son, and they stand condemned, do you think that’s respectful of other religions?

Vought: Senator, I wrote a post based on being a Christian and attending a Christian school that has a statement of faith that speaks clearly in regard to the centrality of Jesus Christ in salvation.

Sanders: I would simply say, Mr. Chairman, that this nominee is really not someone who this country is supposed to be about.

Over at the National Review, the brilliant David French explains just how disgusting this exchange was:

This is a disgraceful and unconstitutional line of questioning from the man who came close to being the Democratic nominee for president. He’s not only imposing a religious test for public office in direct violation of Article VI of the United States Constitution, he’s gone so far as to label this decent man — who’s seeking to serve his country in a vital role — as “not someone who this country is supposed to be about.” Vought expressed entirely orthodox Christian beliefs. There is nothing “extreme” about his statements, and they mirror the statements of faith of countless Christian churches and schools across the land. Are these believers also not fit for public office? I’ve written that Christians and Muslims don’t worship the same God. I suppose that means America’s not “about” me, either.

It got worse. Senator Chris Van Hollen of Maryland doubled down, attacking the same expression of belief all while absurdly stating that “no one” is questioning Vought’s faith. Leading media outlets need to immediately ask Senator Sanders and Senator Van Hollen if they believe that orthodox, traditional Christians aren’t fit for public office. If there was any evidence at all that Vought had ever violated the legal rights of Muslims, that would certainly be relevant to his confirmation. His Christian faith is not.

The Chief Ethicist at the Southern Baptist Convention, Russell Moore, was similarly upset by the attack on Mr. Vought (and on all American Christians).

“Senator Sanders’ comments are breathtakingly audacious and shockingly ignorant—both of the Constitution and of basic Christian doctrine. Even if one were to excuse Senator Sanders for not realizing that all Christians of every age have insisted that faith in Jesus Christ is the only pathway to salvation, it is inconceivable that Senator Sanders would cite religious beliefs as disqualifying an individual for public office in defiance of the United States Constitution. No religious test shall ever be required of those seeking public office. While no one expects Senator Sanders to be a theologian, we should expect far more from an elected official who has taken an oath to support and defend the Constitution.”

Every American should be calling their representatives, calling their local media outlets, and contacting the national media networks demanding that Senator Sanders and Van Hollen be held accountable for their disgusting attacks on Mr. Vought. By decrying the commentary written by Vought and arguing that anyone who holds traditional Christian beliefs is not suited for work in the government, the liberal Senators are arguing that Christians should be second-class citizens in this nation. Lest you think this is an overreaction, remember that Sanders was very nearly the Democrat nominee for President and he was far more popular than Hillary Clinton was which means he could very easily have been our President (had the DNC not cheated to give Clinton the victory). This is serious stuff folks and we have to fight back.

You can watch the entire hearing here.