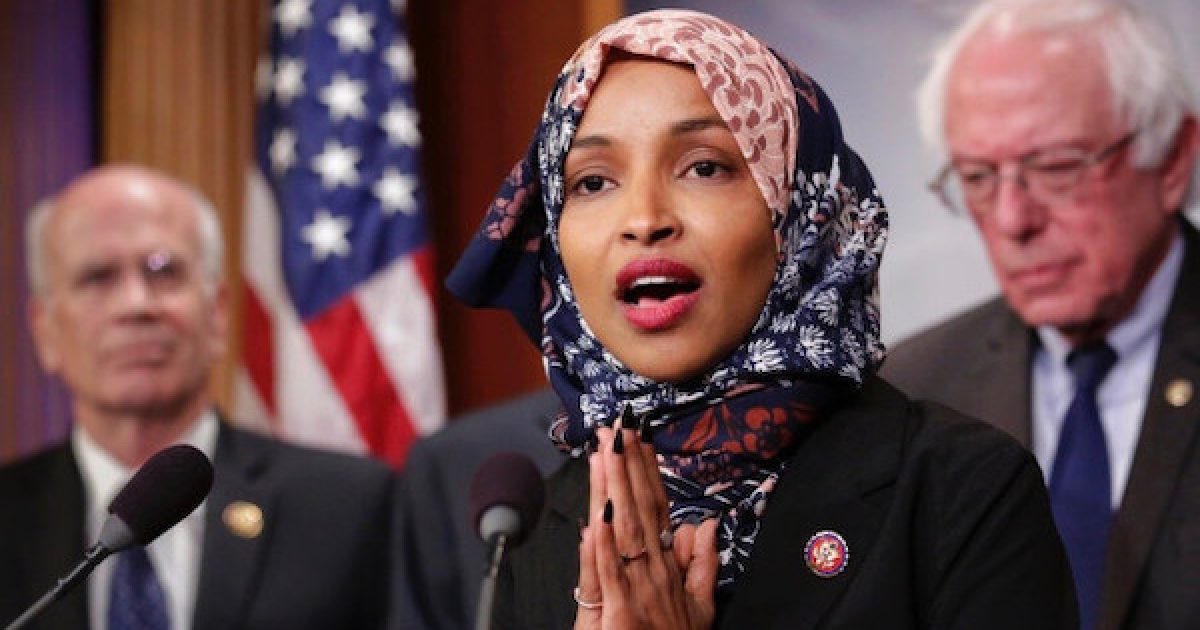 Sen. Bernie Sanders reached out to Rep.Ilhan Omar via telephone about the condemnation she received from both sides of the political aisle over a series of anti-Semitic messages. The Daily Beast reports that the Vermont senator, who is was born Jewish but does not practice the faith, reached out “to offer his support amid criticism from both Democrats and Republicans,” even in spite of the fact that prominent liberals, such as House Speaker Nancy Pelosi and Chelsea Clinton, have blasted her for blatant Antisemitism.

“I talked to Ilhan last night to give her my personal support,” Sanders was quoted as saying during a conference call hosted by James Zogby. “We will stand by our Muslim brothers and sisters.”

James Zogby, a former Democratic Party committeeman, has a long history of anti-Semitic statements. He has referred to Israelis as “Nazis,” and has described sitting members of Congress as “Israel Firsters,” an anti-Semitic charge that implies dual loyalty to the Jewish state. Both statements have been labeled as anti-Semitic in the U.S. State Department’s definition of Antisemitism.

Bernie called Rep. Omar to offer his support as she faced blowback over her comments on Jewish donors, @GideonResnick reportshttps://t.co/adRGCq6H9d

Omar continues to battle through a controversy that has included references to Israel as “evil,” comparisons of Israel to Iran, repeated anti-Semitic tropes, and support of the anti-Semitic BDS movement.

Omar had issued an apology for her latest anti-Semitic rants, but it was met with some skepticism, as it included a “but” statement.

“I unequivocally apologize,” she said in a statement, adding, “at the same time, I reaffirm the problematic role of lobbyists in our politics, whether it be AIPAC, the NRA, or the fossil fuel industry. It’s gone on too long, and we must be willing to address it.”

As a wise old man once said, a “but” statement in an apology turns everything before the but into bullsh*t.

President Trump ripped her apology, calling it “lame” and saying Omar “should be ashamed of herself.”

President Trump on anti-Semitic Rep. Ilhan Omar (D-MN) "Her lame apology, and that's what it was, it was lame, and she didn't mean a word of it, was just not appropriate. I think she should resign from Congress." pic.twitter.com/ZLFwDOttqa

Omar’s Antisemitism should come as a surprise to absolutely no one. The now infamous tweet which she said Israel had “hypnotized the world” and called the nation “evil” was published over six years ago. She has, on multiple occasions – quantified at best, defended at worst – the actions of ISIS terrorists.

Israel has hypnotized the world, may Allah awaken the people and help them see the evil doings of Israel. #Gaza #Palestine #Israel

About a year ago, Jewish leaders in Minnesota approached Omar about her anti-Semitic rants.

“Tropes, dog whistles — call them what you will,” one state senator recalled. “We explained to her how hurtful, and factually inaccurate, they were. Frankly, I was hoping she’d grow in office a little, and understand the media platform she has,” he added. “Instead, she keeps repeating her mistakes, if you can call them that.”

Meanwhile, Sanders, who has just announced his second run for the presidency, may be okay with his “Muslim brothers and sisters” defaming Judaism and the state of Israel, sadly, as  American Jews and the MSM have their heads in the sand regarding the Democratic Party’s Antisemitism, it is doubtful that his support of the Jew-hating Omar will hurt him in the least.

Much of this Post Was first seen at Mental Recession.