CRAZY! Bernie Sanders Says He Will Consider AOC For A Cabinet Position 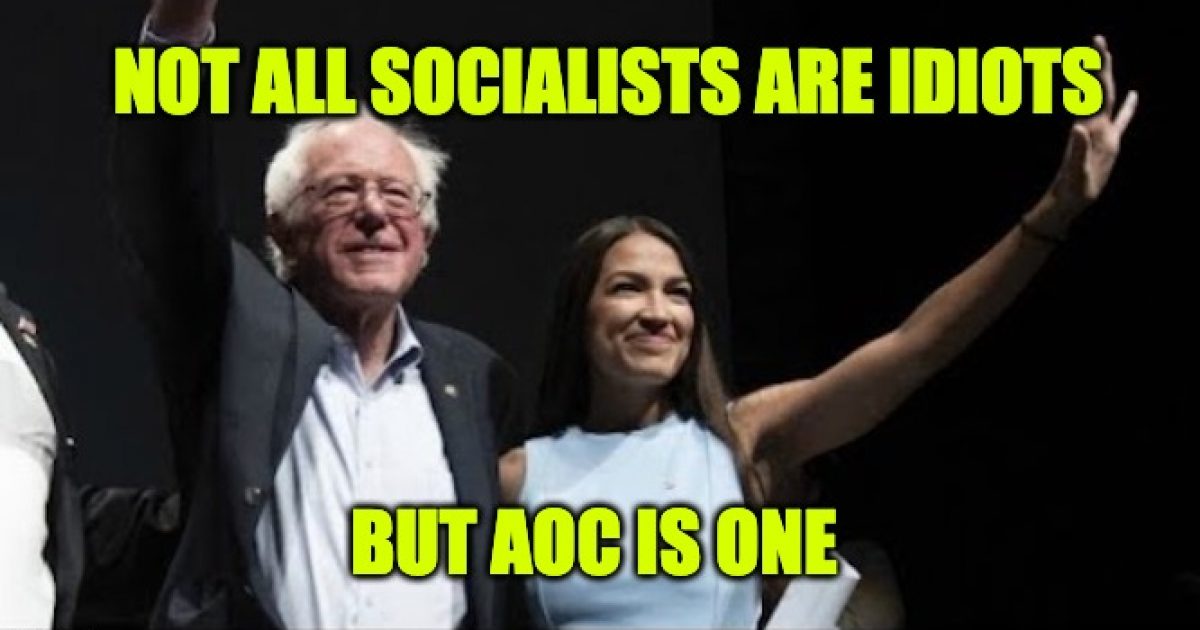 Presidential hopeful Bernie Sanders told ABC News that socialist Alexandria Ocasio-Cortez would “no doubt” play a significant role in his administration. In fact, Sanders suggested he’d be willing to have her as a member of his Cabinet. How about the Secretary of Education, since there is no better evidence of the failings of the American education system than AOC. Or perhaps Secretary of Commerce, look what she did to Amazon in NYC?  She could kill industry throughout America.

“If I am in the White House, she will play a very, very important role,” Sanders told ABC. “No question.”

Sanders’ promise to Ocasio-Cortez echoes those he made during an interview with “CBS This Morning” three weeks ago when he told the New York Democrat that she definitely would be a part of his administration.

Sanders throughout the interview gushed like a smitten schoolboy over Ocasio-Cortez’s qualifications and the impact she’s had during her short tenure in Congress.

“At the end of one year, she is a leader in the United States Congress,” he raved. “Her ideas are resonating all over this country.”

Nay, her ideas are a punchline all over this country.

“I don’t know of any person — I’ve been in Congress for a few years — who in the course of less than one year, she’s been in office for less than one year, who’s had more of an impact in American politics as a freshman member of Congress than she has,” Sanders claimed.

Well, he’s correct in a way I don’t know of any person who’s had more impact as a freshman of Congress in providing fodder for conservative commentators.

AOC has no accomplishments to speak of, outside of dragging the Democrat party into oblivion by lining up behind her extremist policies and platforms.

Watch my latest ? for the breakdown on the split: pic.twitter.com/mtDptfOvHh

Besides creating material for Saturday Night Live, it’s difficult to get an understanding of the benefit this political marriage between the curmudgeonly Sanders and the exuberant but bafflingly incompetent Ocasio-Cortez has for either party.

Granted, they’re both hardcore socialist bordering on full-fledged communists. But Sanders poll numbers have remained stagnant, if not slipping outright, ever since members of the radical ‘Squad’ lent him their endorsement.

ICYMI @NikolenDC asked @aoc the money question after she endorsed @BernieSanders:
“As a woman of color, why back an old white guy?” https://t.co/0PMvc6acKq

For a group of people constantly grousing about old white men in the Republican party, AOC and the Squad sure picked a super old, super white man to stand behind.

A CBS reporter recently noted the contrast in messaging involved in the Squad – who always plays the race card – locking arms with an “old white guy.”

“As a woman of color, why back an old white guy?” the reporter asked. “And is this the future of the party?”

Socialism is the future of the party, of course. Just not America.  But AOC??? According to Real Clear Politics,  Sanders is third in the national standing for the Democratic nomination with 17.8%. That’s only three points lower than AOC’s I.Q.

President Trump, during his last State of the Union address, vowed that America would never succumb to the travesty of socialism. If Bernie, Alexandria Ocasio-Cortez, and the rest of the squad have their way, America would be a socialist regime.

President Donald Trump slams socialism: "America was founded on liberty and Independence and not government coercion, domination, and control. We are born free and we will stay free."

"America will never be a socialist country."

Bernie Sanders has a massive frown on his face pic.twitter.com/dY0D2J2CKJ