Bernie Sanders Fans Believe He Should Be Handed 2020 Democratic Nomination 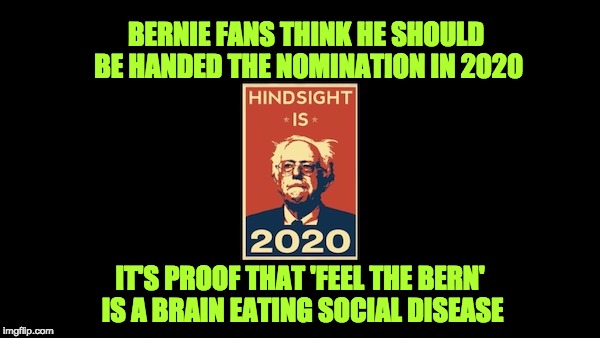 Sanders used his People’s Summit speech to re-litigate the 2016 primaries, taking shots at the establishment Democrats who tipped the scales toward Hillary Clinton.

But it was his unsparing assessment of the party whose nomination he sought in 2016 that set off an audience of nearly 4,000 mostly dedicated ‘Berniecrats.’ ‘I am often asked by the media and others, ‘How did it come about that Donald Trump, the most unpopular presidential candidate in the modern history of our country, won the election?’ he offered teasingly as chants of “Bernie would have won” filled the hall. ‘My answer is that Trump didn’t win the election, the Democratic Party lost the election,’ Sanders said, reviving his own past criticisms.”

But the thousands of liberals at the Summit didn’t want to talk about the past they wanted to focus on the future and that future is Bernie.

“He’s so clearly ahead,” she said, predicting he would “sail” to the nomination if he got into the race. “He has the most comprehensive program. He’s been doing this his whole life. What people want is what Bernie is saying.”

National Nurses United helped organize The People’s Summit in Chicago, a conference of 4,000 progressive leaders that at times felt as much like a celebration of Sanders himself and his work to push the Democratic Party leftward.

There was also an ever-present sense that Sanders’s drive to the White House was not over. One popular shirt at the conference featured a picture of Sanders’s face with the words “Hindsight is 2020” below. During Friday’s program, a member of National Nurses United ticked off a list of progressive goals that included electing Sanders for president, a statement that drew uproarious applause.

When Sanders himself delivered a speech Saturday, members of the audience shouted at him to consider another run.

The independent senator from Vermont didn’t share his plans on stage. In the past, he has said that he has not made up his mind about 2020.

But like his supporters, members of his old campaign say Sanders deserves more respect from the oddsmakers—Democratic and Republican alike—than he is getting.

“Why isn’t he considered the front-runner?” asked Mark Longabaugh, a senior adviser to Sanders’s 2016 presidential campaign. “The political establishment, in the media and the Democratic Party, remain as out of touch with the electorate as they were in 2015 and 2016.”

Longabaugh checked off a list of reasons Sanders would be formidable, including a small-dollar fundraising base that raised hundreds of millions of dollars in 2016 and political organization that still exists in all 50 states.

“He also starts with a compelling and focused message,” the adviser said. “No other potential candidate starts with those assets.”

The already liberal democratic party has gotten even more liberal in recent years, so it would not be surprising to see Bernie Sanders get the nomination in three years. His supporters are convinced Bernie would have beaten Donald Trump in 2016:

“When they sent Bernie to the sidelines, that’s when all the air went out of the grassroots movement,” said Quist, the Montana candidate who attended the summit. “It was pivotal.”

The Sanders supporters all said they would back him in another presidential campaign.

“The man appears, and I just start crying,” said Hillary Keyes, a 57-year-old resident of Boca Raton, Fla. “He connects with me on a level I’ve never experienced, in my heart and gut. It just resonates.”

There must be narcotics in the Boca Raton water supply. Or the years of feeling “the bern” must have caused brain damage.