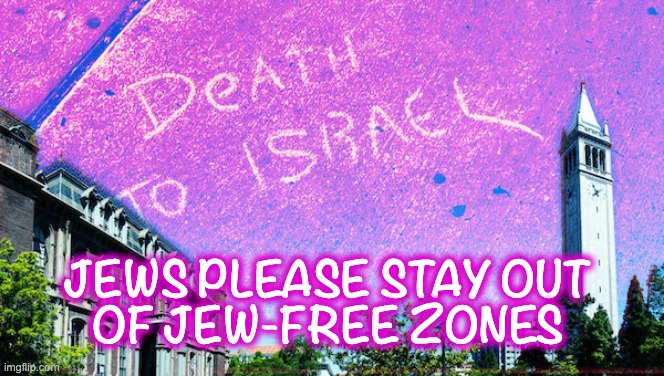 The decision to bar “Zionist” speakers from meetings of student groups at the University of California-Berkeley School of Law has been described by some critics as creating “Jewish-free zones,” as during the Holocaust.

A closer historical analogy, however, would be to the infamous “ghetto benches” established on some European college campuses in the 1930s.

In many universities in pre-World War II Poland, antisemitic faculty and students humiliated Jewish students by forcing them to sit in the back of classrooms. Those areas came to be known as the “ghetto benches.” In some instances, the benches were marked with the first letter of the name of the Jewish student group on campus—a kind of precursor to the Nazi practice (first instituted in German-occupied Poland, in fact) of identifying Jews via a badge or i.d. card bearing a Star of David and the letter “J” or the word “Jude.”

If there were insufficient seats in the back of the Polish classrooms, the Jewish students were made to stand, even if there were empty seats elsewhere in the room. Jewish students who ignored the regulation were often assaulted, and those who boycotted classes in protest were severely penalized.

The Polish Ministry of Education initially opposed the practice because it violated the treaties that Poland had signed after World War I to protect ethnic minorities. But under pressure from antisemitic student organizations, the ministry ruled in 1937 that individual universities had the right to decide their own seating policies.

The intensification of such practices triggered some protests abroad. More than one thousand American professors and university presidents signed a petition denouncing the ghetto benches as “alien to the spirit of academic freedom.” Several thousand British academics joined a similar protest.

Rabbi Stephen S. Wise, America’s most prominent Jewish leader, raised the issue of anti-Jewish discrimination in Poland when he met with President Franklin D. Roosevelt in January 1938. Wise was shocked and disappointed by FDR’s response.

In a private memo for his files—not intended for publication—Wise described how President Roosevelt blamed the alleged Jewish domination of the Polish economy for provoking antisemitism. The problem, FDR asserted, was that “the Jewish grain dealer and the Jewish shoe dealer and the Jewish shopkeeper” were squeezing out their non-Jewish competition. And that, Roosevelt claimed, was the reason that many Polish Christians began saying, “the Jew should go.”

Wise protested that blaming Poland’s Jews was “pure Fascist talk,” but the president was unmoved, according to the memo. “It was,” Wise wrote, “like a blow in the face” to hear Roosevelt’s remarks.

The president’s attempt to blame antisemitism in Poland at the feet of Jewish shopkeepers could not, of course, account for the spread of antisemitism in nearby countries, including Austria and Romania, where “ghetto benches” likewise were instituted. In Romania, the practice was extended even to Jewish reporters covering parliament.

When Rabbi Wise raised the issue of Romanian Jews in that meeting with President Roosevelt, FDR told him to “talk about that to [Secretary of State Cordell] Hull.” But when Wise met with Hull later that day, all the secretary of state would say on the subject was, “I will have to consider that with my associates.”

Senator Key Pittman (D-Nevada), chairman of the Senate Foreign Relations Committee, received a similar brush-off when he wrote to Hull that week about the mistreatment of Jews in Romania. The reports of persecution actually resulted from “misunderstanding or confusion,” Hull insisted. Besides, the secretary of state claimed, “only those Jews who have in recent years immigrated into Rumania” were at risk. In any event, Hull concluded, “any action taken by the Rumanian Government concerning the peoples with its borders is a matter which lies within the jurisdiction of that Government.”

Hull’s position reflected the longstanding view of President Roosevelt that the persecution of Jews in Europe was none of America’s business.

The Roosevelt administration was unmoved even by evidence that anti-Jewish discrimination, such as the “ghetto benches,” often escalated into violence. In his book ‘The Swastika’s Darkening Shadow,’ Prof. Monty N. Penkower reports that 118 Polish Jews were murdered and over one thousand wounded in local pogroms during a single eighteen-month period from 1935 to 1937.

Nevertheless, the Roosevelt administration never considered the idea of opening America’s doors to more Jewish immigrants from Poland or Romania—even within the existing quota laws. The Polish quota of 6,524 was not filled in any year from 1933 to 1945. Even the tiny Romanian quota of just 377 was unfilled in nine of those twelve years. Roosevelt’s policy of suppressing immigration below what the law permitted did not waver.

Berkeley, California, in 2022, is not Poland or Romania in 1937. But the frightening spectacle of Jews (or, euphemistically, “Zionists”) being excluded from specific spaces on a university campus in the United States today is no less repugnant than it was in Europe in the 1930s.

Dr. Medoff is the founding director of The David S. Wyman Institute for Holocaust Studies and the author of more than 20 books about Jewish history and the Holocaust. His most recent book, America and the Holocaust: A Documentary History, was published by the Jewish Publication Society of America / University of Nebraska Press. And available on Amazon(as are his other books).