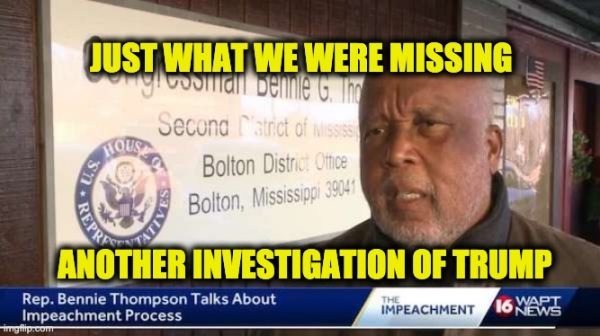 If Congressional Democrats weren’t investigating President Trump, it’s a wonder if they would do anything at all. Their lastest waste of America’s time and money is an investigation into the treatment of the President’s Secret Service detail. The Democratic lynch mob led by Rep Bennie Thompson is upset about Sunday when the POTUS  took a ride in his motorcade to thank the people gathered outside Walter Reed to support him during his hospital stay.

Homeland Security Committee Chairman Bennie Thompson (D-MS) called Trump’s thank you lap,  a “joyride” that risked the health and safety of the agents who had to accompany him on the trip.”

“So we can know more about how these events have affected the Secret Service and national security, I have requested a briefing from the agency on the current safeguards in place for their employees — including on the President’s protective detail — and how Secret Service agents can be kept safe from coronavirus-related threats, including apparently the President himself,” Thompson said in a statement.

Trump tweeted that the trip was deemed safe by medical staff at the hospital. An attending physician also accompanied Trump on the drive and wore a mask and other protective equipment.

Additionally, there was a plastic barrier between the POTUS and the secret service members, and those same agents were with Trump when he was in the hospital suite.

In other words, like most liberals and the media (is that redundant?) Rep. Bennie Thompson made a big deal about the Sunday trip around the hospital because he cared about the agents, but because it was Donald J. Trump.

I am not sure that people should give any credence to what Thompson says.  Besides being a fan of Louis Farrakhan, Thompson is not a fan of the American people who have different opinions. Bennie has called Supreme Court Justice Clarence Thomas an “Uncle Tom” and those who opposed Obamacare racist, just to give a few examples.