How to Cause Mass Panic in a Foreign Country

Don't Bring A Mortar To An Airport. Especially An Airport In Israel 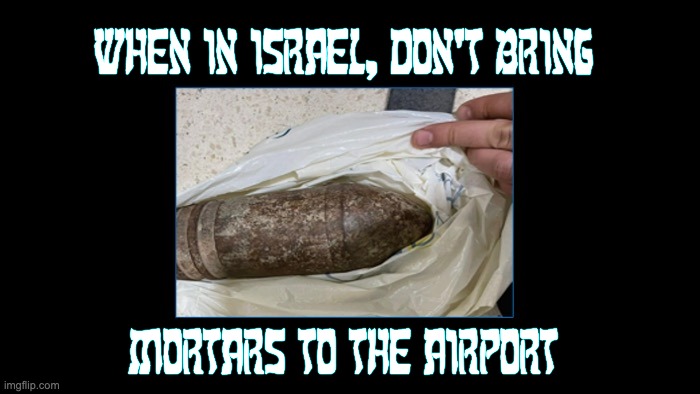 American tourists have a reputation, and it’s not always good. The term “ugly American” as a cliché has been around for a very long time. But when it’s not making loud, obnoxious statements, it’s sometimes doing stupid things…like picking up a live mortar round and bringing it to Israel’s Ben Gurion Airport as a “souvenir,” for example.

An American family approached the security area at Ben Gurion Airport, removed the mortar shell from their backpack, and asked if they could put it in their luggage. The security agent immediately called for an evacuation of the area. However, another passenger standing nearby misunderstood the security agent and started shouting, “terrorists shooting!” [There are benefits to learning a language instead of just a word or two here and there].

The misunderstanding caused a panic. People ran through the terminal screaming, fell on the floor, left their luggage, and one man was injured when he stumbled over the conveyor belt before the evacuation was called off.

A 32-year-old man identified as Uri injured himself during the panic and was taken to a hospital.

“I was at the airport waiting for an hour in line until I got to the check-in counter, and suddenly at a radius of five meters people started running away and left luggage,” he told YNet, the BBC reported.

“The fear was that someone is spraying bullets. I understood that I too have to escape, so I ran towards the check-in, I stumbled on a conveyor belt… and flew a distance of six meters,” he said.

The family had been hiking on the Golan Heights, and their son found the unexploded munition. Why they took it as a souvenir is anyone’s guess, but apparently, they don’t watch many war documentaries on the History Channel or read about terrorist attacks in Israel in newspapers. Wait, I forgot! If a newspaper covers Israel being attacked by Palestinian terrorists, it will be buried near the classified ads, or it will be part of an editorial bashing Israel for allowing its citizens to bleed on “occupied territory.”

The family was near the areas of the Golan Heights, known to have unexploded munitions. Those areas are “clearly marked and fenced off.”  Note:  in Israel, important signs like those outlining danger are written in three languages: Hebrew, Arabic, and English.

Somebody didn’t get the memo or the brains. Putting aside the fact that they were endangering themselves, Israel is a country that all too often has been a target for terrorists. Did they really believe that Israeli security would allow them with an unexploded mortar shell on the plane? The last time I went to Israel, I bought a Shofar, a horn made from a ram’s horn used on Rosh HaShana. The security at Ben Gurion knew what a Shofar was, but still, it was carefully examined before I was allowed on the plane,

The unexploded ordinance in question:

If you travel to Israel be wary of areas with mines and mortars along the Golan Heights, and WHATEVER you do. DO NOT grab one as a souvenir and then bring it into an AIRPORT. You would think this should not have to be explained ?‍♂️ pic.twitter.com/mH0keIAXs2

The mortar shell was taken away. The family was grilled by security agents and allowed to board the plane. They were apparently unaware of the danger from the round. So if you plan to travel overseas, a little research would be good before you leave. And if it’s a known conflict zone like Israel, please pay attention to the signs.