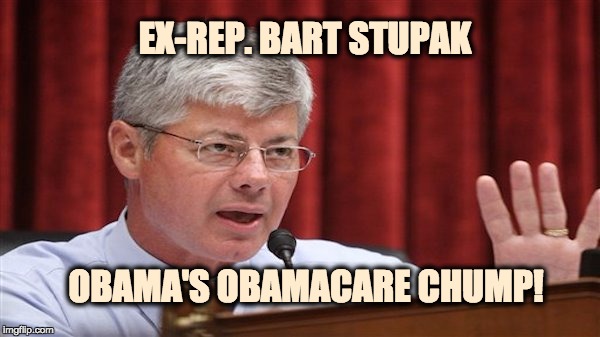 If we could meet former Pennsylvania Rep. Bart Stupak (D-MI) I would tell him one thing – ‘we told you so.’ We told you so when you negotiated your ridiculous deal with President Obama that you naively hoped might save lives. The deal that enabled the passage of Obamacare and didn’t prevent the legislation from funding abortion.

On March 21, 2010, Stupak made a deal with Obama whereby he and his bloc of Democrats would vote for the final Obamacare bill if Obama signed an executive order barring federal funding of abortion under the bill. That’s when Stupak became Obama’s chump.

The president signed the executive order, but instead of abiding by the deal, the President and the pro-abortion Democrats passed Obamacare and  promptly ignored the promises they had made to Stupak’s pro-life Democrats.

Now, less than 10 years later the Democrat Party is openly telling Stupak and other Democrats like him,  they and their views on abortion were no longer welcome in the party.

“Every Democrat, like every American, should support a woman’s right to make her own choices about her body and her health. That is not negotiable and should not change city by city or state by state,” DNC chief Tom Perez recently proclaimed. His pronouncement was soon followed up by Senator Dick Durbin (D-IL) who agreed, “As long as they are prepared to back the law, Roe vs. Wade, prepared to back women’s rights as we’ve defined them under the law, then I think they can be part of the party.”

The disgusting commentary was met with a swift and harsh response from one of the leading Catholic leaders in America, Cardinal Timothy Dolan. Dolan told his flock,

“In the name of diversity and inclusion, pro-life and pro-‘choice’ Democrats, alike, should challenge their leadership to recant this intolerant position.”

While we cannot measure Dolan’s impact just yet, we can see an anecdotal shift across the Midwest as pro-lifers shift their vote from Democrat to Republican.

CNSNews.com: “As you mentioned, Kristen Day with Democrats for Life of America, and also Father Pavone with Priests for Life, have both cited numbers suggesting there is a significant portion of Democratic voters who are pro-life.”

Rep. Stupak: “There is, and there are a significant number that are pro-life – more than they know. And, those who no longer call themselves Democrats have probably moved to Independent, or they’d consider themselves moderate Republicans today. “I can’t tell you how many people in my old district, even today come up and tell me, “You know, I was a Democrat until the party left me on the life issues, and I just can’t do that anymore, so I don’t identify as a Democrat anymore, so we appreciate your pro-life views. And, these are people who voted, probably Republican until I ran.”

No d’uh, Bart. We tried to tell you all of this YEARS AGO. YOU GOT DUPED!! Your party hates you, they hate your beliefs, they hate anyone who believes in the sanctity of life. Try as you might to fix your error, you’ll always be known as Obama’s Chump.