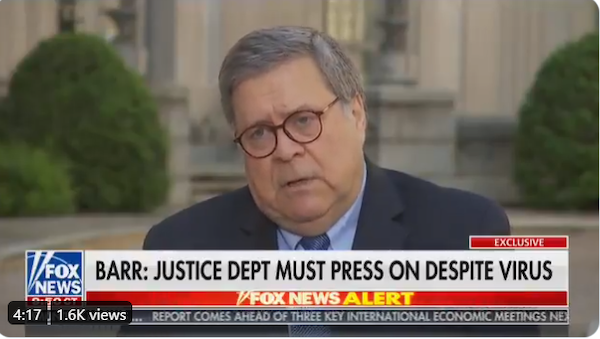 AG William Barr agreed that it was important to fire IG Michael Atkinson after President Trump did so a few days ago. Atkinson was the person who brought the “whistleblower” report directly to Congress rather than to the DOJ.  In an interview with Laura Ingraham, Barr also gave an update on the status of John Durham’s investigation into the abuse of the FISA court. (Daily Wire). Barr Trump correct

AG Bill Barr defends the firing of the IG by President Trump. And he says his office will go after anyone who breaks the laws — especially for political gain or retribution. pic.twitter.com/Ja52MJ9l7i

Another Inspector General out the door

Ex-CIA director and accused perjurer, John Brennan slammed the President’s firing of IG Michael Atkinson, and all the Democrats piled on. (John Brennan is part of the deep state and should be prosecuted himself.) But that doesn’t stop the Democrats from falling all over themselves to agree with him.

“By removing Atkinson and sending a signal to others, Mr. Trump continues to show his insecurity in terms of trying to stop anybody who’s going to expose, again the lawlessness that I think he not only has allowed to continue but also that he abets.” John Brennan to MSNBC

But it has nothing to do with any “insecurity,” it has to do with wanting responsible watchdogs, according to Barr. Attorney General William Barr told Laura Ingraham that it was a good idea to fire Michael Atkinson.

“I think the president did the right thing in removing Atkinson. From the vantage point of the Department of Justice, he had interpreted his statute, which is a fairly narrow statute, that gave him jurisdiction over wrongdoing by Intelligence people, and tried to turn it in to a commission to explore anything in the government and immediately reported to Congress without letting the Executive Branch look at it and determine whether there was any problem. He was told this in a letter from the Department of Justice, and he is obliged to follow the interpretation of the Department of Justice, and he ignored it. So I think the president was correct in firing him.”  AG William Barr

Once again, a deep stater ignored the proper protocols and bypassed the President in a politically motivated attempt to hurt him. He claimed to be “just doing my job.” But we now know that he was told by the DOJ not to do that and he did it anyway. Definitely grounds for firing.

Since the pandemic hit, we haven’t heard much about John Durham’s investigation into the FISA abuse. AG William Barr gave an interesting update that we should all pay attention to when Laura asked if he would soon be done with his report:

“Well, I think a report maybe – and probably will be a byproduct of his activity, but his primary focus isn’t to prepare a report. He is looking to bring to justice people who are engaged in abuses if he can show that they were criminal violations, and that’s what the focus is on. And as you know, being a lawyer you yourself, building these cases – especially the kinds of sprawling case we have between us that went on for two or three years here, it takes some time – it takes some time to build the case. So he’s diligently pursuing it. My own view is that the evidence shows that we’re not dealing with just mistakes or sloppiness. There is something far more troubling here, and we’re going to get to the bottom of it. And if people broke the law, and we can establish that with the evidence, they will be prosecuted.”

“Not just mistakes or sloppiness.” The FISA court was created to protect Americans, not destroy them. The FBI and those involved (including John Brennan) turned the FISA court into a weapon against Americans because of their animus toward our President.

This cannot happen again, ever. AG Barr said there are safeguards that can be put into the FISA court that would preclude them from ever being abused by the FBI or CIA again. Let’s hope that happens and soon.