Barr Vs. Mueller On Obstruction Statute: Anatomy Of An Epic Chess Move 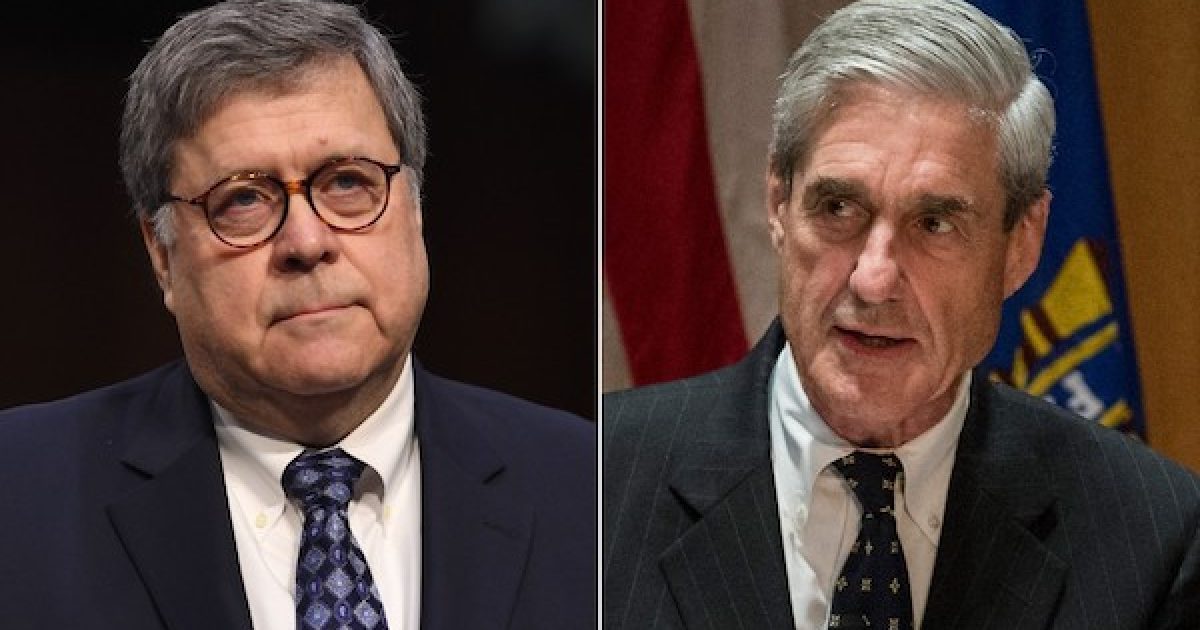 A fascinating article appeared at Human Events on Wednesday.  Will Chamberlain, a lawyer and the publisher of Human Events, laid out an argument that centers on the interpretation of the federal statute used by Robert Mueller for his consideration of obstruction charges as regards the “Russia-Trump” investigation: 18 U.S.C. § 1512(c)(2).

The short story on this is that the Mueller team decided to pin its deliberation of the obstruction issue to 1512.  There are several other obstruction-related statutes (see the Chamberlain piece, as well as the tweet thread from @JohnWHuber below).  But none of them was arguably relevant in a situation with no predicate crime and no pending legal proceeding.

The current attorney general, William Barr, disagreed strongly with the Mueller team’s reasoning about 1512, and in June 2018 – while in private practice – forwarded a brief on the matter to Deputy AG Rod Rosenstein, who at that point was the supervising authority for the special counsel.  The situation thus boiled down to dueling interpretations of 1512.

This sounds like an eye-wateringly arcane legal dispute.  And it is.  But two crucial windows of insight into its significance have been afforded by @JohnWHuber (“Undercover Huber”) and Will Chamberlain.

The key “Huber” insight is that the Mueller team’s argument on 1512’s applicability was most probably structured and advocated by Mueller’s deputy Andrew Weissmann.  I commend the tweet thread to your perusal, rather than trying to summarize the case for that.  It’s extremely thorough (and not difficult to follow).

Here’s why Andrew Weismann is almost certainly the driving force behind Mueller’s embrace of a legally dubious theory of Obstruction of Justice, targeting @RuleDonaldTrump

For our purposes here, the top-line point is the one about Weissmann being behind it, for which “Huber” makes the case.  Weissmann’s dubious links across the Russiagate-Spygate nexus thus come into play. Bruce Ohr’s testimony that Weissmann, a senior DOJ official, knew about the Steele dossier as early as August 2016. He also knew what Strzok and Page were doing; documentary evidence that Weissmann set up the strange April 2017 meeting at which journalists cued FBI agents to the existence of an entry information for Paul Manafort’s Northern Virginia storage locker; the often-repeated points that Weissmann was a donor to Hillary Clinton’s 2008 campaign and attended her election night party in 2016.

Weissmann has been assessed by right-wing observers all along as a biased participant.  He and Mueller had worked the Enron case together, and indeed, the 1512 obstruction statute has connections to the Enron case (see “Huber”).  But Weissmann also had his telling, more recent history, and thus the probable motive – from being connected with the origins of Russiagate-Spygate – to build any obstruction case he could manage to, however thin and indefensible it might be.

Chamberlain’s insight: the 1512 faceoff is pivotal.  The people opposing the Mueller-Weissmann interpretation were Trump’s own lawyers, who had quickly recognized that “obstruction” would become the key to the Mueller probe.

And their crucial insight was an abstract but operationally crucial one.  If 1512 were held to be applicable – in particular, if Rod Rosenstein bought off on that – there would be no way to end the Mueller probe as long as the personnel remained in the same positions.

Read the entire Chamberlain article to get a complete understanding of the matter.  Here, for our purposes, is his summary of the situation Trump’s lawyers faced in mid-2018, when it had become clear that Mueller was using the 1512 statute to deliberate “obstruction”:

This was not a lawsuit or a criminal proceeding. It was an investigation. [Trump lawyers] Dowd and Sekulow couldn’t go in front of a judge and demand the investigation be stopped; no judge had jurisdiction.

But if Trump’s legal team couldn’t persuade Mueller to let go of his obstruction theory, the investigation could go on indefinitely. Any act that could be characterized as “impeding” the Russia probe – even the exercise of core Article II powers or Trump’s complaints about Mueller – could conceivably be investigated as potential obstruction of justice.  Rather than ending by Thanksgiving 2017, the Mueller investigation could continue through Trump’s first term – and perhaps longer.

Rosenstein had indeed bought off on the Mueller interpretation, as was apparent to Trump’s team once they had lodged their concerns about it.  Rosenstein wouldn’t act as a brake on Mueller’s continuing quest for obstruction under his unique interpretation of 1512.

What the Trump side needed was – long story short – someone else supervising the special counsel.  Chamberlain’s theory, in a nutshell, is that Barr is that someone, and he was positioned to become the new supervisor of the Mueller probe starting nearly a year ago, when he forwarded the brief to Rosenstein in June 2018 challenging the Mueller-Weissmann interpretation of 1512.

Chamberlain walks us through a theory of how the steps were ordered to maneuver Barr into position, and what the considerations were along the way.  Again, I commend his write-up as a fascinating tale.

Readers can decide for themselves what they think.  The bottom line for me is that the crucial operational points are pretty convincing in a structural sense (as opposed to the details of who, when, and where).  With Mueller basing his activities on the open-ended interpretation of 1512, there was no way to force an end to his “investigation” – and therefore, someone with higher authority had to make the decision that the Mueller interpretation would not govern the course of events.

As for how Barr was brought into it, Chamberlain’s proposition appears plausible.  The important takeaway from his treatment is not that we have a set of validated answers, tied up in a bow.  It’s that this is a superb illustration of how the confrontation of the “Deep State” with the Trump administration is taking place.

That Trump himself has the capacity to maneuver in this manner – a manner that involves wielding levers, inducing outcomes rather than forcing them frontally, recognizing the pressure points that other people’s expertise identifies for him – has been apparent to me for a while.  If Chamberlain is mostly right, it’s also evident that Trump’s legal team felt empowered as well as motivated to pursue an audacious strategy.

It’s a perfectly legal strategy and fully justified given that Trump is the duly elected president, and there is no justification whatsoever for a special counsel holding him at open-ended risk for the rest of his term (or, indeed, for the rest of time).  The rule-of-law principle militates against open-ended risk, just for starters.  But on the narrower point, Chamberlain’s (and “Huber’s”) argument is compelling that 1512 was not designed as a basis for holding subjects at open-ended risk of obstruction charges.

I have no doubt that lawyers can and will argue this in dozens of narrowly-scoped ways, and more power to them.  My view here is one of operational maneuver and strategy.

It is a very fine intellectual exercise to ponder that this is how the Battle of the Deep State has to be fought.  Trump has been using maneuver to reform his national security team similarly and has even approached some specific foreign policy and national security problems this way.

But the Barr move would be one of the most important to date. Kimberley Strassel laid that out at the Wall Street Journal on Thursday, making what we might call the transitional point. If, as Chamberlain suggests, Barr was the guy who could end the Mueller probe by ruling against the Mueller team’s theory on 1512, Barr is also the guy who can move us forward along the timeline.

Weissmann is an emblematic thread running on multiple vectors through the phase that had to be ended.  Now Barr is the face of the next phase.  Strassel highlights evidence from his Senate testimony on Wednesday that he’s already got it underway:

Mr. Barr made real news in that Senate hearing, and while the press didn’t notice, Democrats did. The attorney general said he’d already assigned people at the Justice Department to assist his investigation of the origins of the Trump-Russia probe. He said his review would be far-reaching—that he was obtaining details from congressional investigations, from the ongoing probe by the department’s inspector general, Michael Horowitz, and even from Mr. Mueller’s work. Mr. Barr said the investigation wouldn’t focus only on the fall 2016 justifications for secret surveillance warrants against Trump team members but would go back months earlier.

He also said he’d focus on the infamous “dossier” concocted by opposition-research firm Fusion GPS and British former spy Christopher Steele, on which the FBI relied so heavily in its probe. Mr. Barr acknowledged his concern that the dossier itself could be Russian disinformation, a possibility he described as not “entirely speculative.” He also revealed that the department has “multiple criminal leak investigations under way” into the disclosure of classified details about the Trump-Russia investigation.

“Do not underestimate,” Strassel urges, “how many powerful people in Washington have something to lose from Mr. Barr’s probe.”  That’s why she says of the Democrats’ (and media’s) hysterical attacks on Barr this week that “most of it is likely fear.”

That fear will only be amplified if the Democrats who were counting on the Mueller probe to be an open-ended tool against Trump have now found themselves, in Chamberlain’s scenario, surprised and outmaneuvered.  Again, readers can decide if they think that describes accurately what has happened. I think it’s worth analyzing in Chamberlain’s terms.

One final point; one that has been mine from the beginning.  The proposition that Russia somehow managed to unduly affect the U.S. 2016 election has been a pathetic and impoverished one throughout, and there is certainly no case that the Trump campaign colluded in the effort to do so.  Trump is, by any measure, the duly, legitimately elected president.

As little as most people have wanted to talk about that aspect of the case, it’s the one that ultimately matters. It means there was never any reason to pursue obstruction charges, nor was there ever any reason to make Trump a subject in any concept of a national security emergency.

And that means that the next direction Barr will be taking us in – investigation of the unjustified, illegitimate campaign of spying on Trump mounted by our national intelligence and law enforcement agencies under Obama – is precisely where we have to go.  Fasten your seat belts.