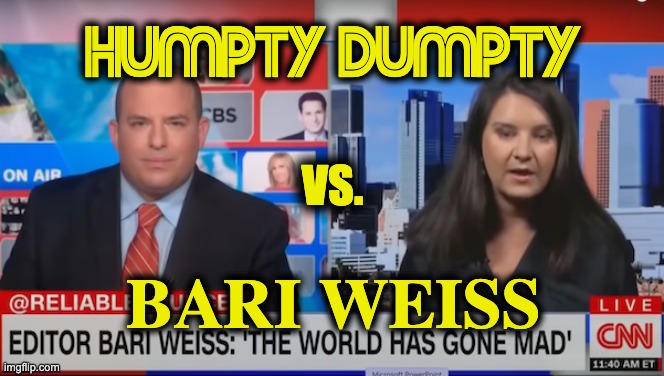 CNN host Humpty Dumpty also known as Brian Stelter — whose entire gig is complaining about what Fox is and is not reporting — doesn’t seem to grasp the idea of a leftwing media consensus (but that would take fairness). Bari Weiss blasts CNN

Or so he feigned on Sunday during a segment of his completely inappropriately named show, “Reliable Sources.” Stelter interviewed Bari Weiss, the former New York Times editor who resigned from her job at the NYTimes because there was pressure to conform to a particular ideology and lecture the unwashed, ignorant masses on what that worldview was since the poor rubes had no clue. In her resignation letter, Weiss said that the “paper of record” has become “the record of those living in a distant galaxy, one whose concerns are profoundly removed from the lives of most people.”

Weiss has hit her stride on Substack with a popular newsletter called “Common Sense with Bari Weiss.” She writes some articles herself and allows guest posts. The newsletter contains opinion pieces, investigative work, and interviews. Often, “Common Sense” addresses concerns that aren’t being tackled in the Corporate Media because they touch on “third-rail” issues — a list of which continues to increase.

Stelter was way out of his depth in this interview, and that’s because Bari Weiss is an intelligent, articulate, interesting successful journalist and editor, and Stelter’s got the IQ of a potato… because he’s a potato.

Weiss writes that there are plenty of people who think that the world has gone mad. Stelter begins by asking her what she meant by that, and she shows just how outclassed he was in the first 25 seconds of the segment.

STELTER: You write there are tens of millions of Americans who aren’t on the hard left or the hard, right, who feel the world has gone mad. So, in what ways has the world gone mad?

WEISS: Well, you know, when you have the chief reporter on the beat of COVID for “The New York Times” talking about how questioning or pursuing the question of the lab leak is racist, the world has gone mad.

When you’re not able to say out loud and in public that there are differences between men and women, the world has gone mad.

When we’re not allowed to acknowledge that rioting is rioting, and it is bad, and that silence is not violence, but violence is violence, the world has gone mad.

Stelter then interrupts and asks what she means by the word “allowed” and who the “they” are—that are censoring people from speaking.

STELTER: And you often say — you say allowed —

WEISS: Everyone’s sort of knows this and —

STELTER: — you say we’re not allowed —

WEISS: It’s the cast on between —

STELTER: — we’re not able, who’s the people stopping the conversation? Who are they?

This is where Weiss drops some shade on CNN itself… on CNN’s “Reliable Sources” with the Jeff Zucker Mini-Me eunuch blinking in confusion like the dunderhead that he is and then making a ridiculous “I don’t believe you” face.

It was a thing of beauty — not the Stelter face, but the truth bombs that Weiss dropped all over CNN’s airwaves.

WEISS: People let work at networks, frankly, like the one I’m speaking on right now who try and claim that you know, it was — it was racist to investigate the lab leak theory. It was, I mean, let’s just pick an example.

However, Stelter wasn’t going to let it go, and he kept pushing the idea that ideas aren’t being censored or that there is such a thing as an accepted Corporate Media narrative— wrong move, Humpty.

STELTER: But who said that on CNN? But I’m just saying though when you say allowed, I just think it’s a provocative thing you say — you say — you say we’re not allowed to talk about these things. But they’re all over the internet —

STELTER: I can Google them and I can find them everywhere. I’ve heard about every story you mentioned.

STELTER: So, I’m just suggesting, of course, people are allowed to cover whatever they want to cover.

Here is where Weiss pushes back and explains that people are beginning to self-censor because they know there is a cost to going against the acceptable, narrow line of thinking.

WEISS: But you and I both know, and it would be delusional to claim otherwise that touching your finger to an increasing number of subjects that have been deemed the third rail by the mainstream institutions, and increasingly by some of the tech companies will lead to reputational damage, perhaps you losing your job, your children, sometimes being demonized as well. And so, what happens is a kind of internal self-censorship.

This is something that I saw over and over again when I was at the New York Times. People saying to themselves, you know what, why should I die on that hill? Why should I take the three or four weeks that it takes to smuggle through an op-ed that doesn’t suit the conventional narrative?

I might, as well, commission the 5,000th op-ed saying that Donald Trump is a moral monster. What’s going on is the transformation of these sense-making institutions of American life. It’s the news media, it’s the publishing house, it is the Hollywood studios, it’s our universities, and they are narrowing in a radical way, what’s acceptable to say, and what isn’t.

Bari Weiss goes all in on CNN, to Brian Stelter's face.
pic.twitter.com/g2QkACuZnS

Weiss is absolutely right. You can get permanently banned from Twitter for saying that a man cannot become a woman. Right-leaning sites like this one face increased scrutiny from so-called “fact-checkers” and ad-hosting sites and are threatened with having revenue pulled for the way that certain stories are covered.

The many reactions of Brian Stelter to @bariweiss dropping truth all over his show. pic.twitter.com/qgy5A34WYn

Later in the segment, Mr. PotatoHead over at CNN says that what Weiss is addressing is “really, really important.”

Really, Brian? You’re concerned about “cancel culture” and the narrowing of what acceptable views are?

Brian and his buddy Oliver Darcy — who played a crucial role in getting Alex Jones banned from Twitter which started the “cancel” ball rolling — recently compared Tucker Carlson to… Alex Jones.

Let’s not forget that Stelter was one of the biggest promoters of Michael Avenatti.

The same guy that rails about the way that Fox News covers things — for example, the way that some hosts on the network say that January 6 was just another riot that happened to be less violent than the BLM/George Floyd/Antifa riots that were happening last summer rather than calling it an “insurrection” and an “attack on democracy.”

But really, he’s concerned about how cancel culture is out of control. Yeah, sure, he is.

Here is the full segment with Bari Weiss:

We’re talking about a guy who once missed his newsletter publishing deadline because he “crawled into bed and cried” because of the pandemic.

He’s not a serious person.

Maybe that’s why he has a show on CNN,,