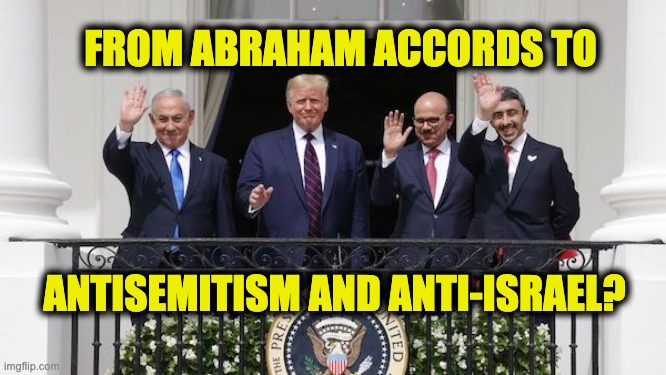 In a recent interview with an Israeli journalist, Donald Trump made some anti-Israel and anti-Semitic comments.

From the moment he came down that escalator in Trump Tower, I predicted that Donald Trump would end the eight years of Antisemitism and anti-Israel policies of Barack Obama. Indeed Trump’s 2016 opponent would not be much of a change as Hillary Clinton created and pushed through many anti-Israel policies during her career. And as President Donald Trump followed through. He eliminated the Antisemitism that spewed from the White House for eight years and was by far the most pro-Israel President since the birth of modern Israel in 1948. . When he ran for reelection in 2020, I urged my fellow Jews and Zionists to vote for Trump. Not only because of Trump’s positive policies on Jewish issues but because Joe Biden was at best inconsistent as a friend of the Jewish State.

Sadly once elected Biden the worst fears of many Zionists were realized. It became evident even before he took office when the new President filled his administration with people with a history of Antisemitism and supporting anti-Semites.

What has been surprising was former President Trump made anti-Israel and anti-Semitic comments in a recent interview.. He was interviewed by Israeli journalist Barack Ravid. To promote Ravid’s interview, Trump’s most controversial statements were released before the entire interview was published.

Trump fumed over a video Netanyahu sent congratulating Biden for his victory. “I haven’t spoken to him since,” Trump said. “F**k him.”

While some freaked at that comment, to be honest, it was no big deal. Even though Netanyahu did the correct thing, Trump felt betrayed by someone he was friends with for over three decades. As for the comment about Bibi, “F**k him,” not only was it pure Trump, but many of my Israeli friends would have said something similar. That’s backed up by the results of the last Israeli election.

The issue is that the former President expanded his bile from the losing Prime Minister to the entire nation of Israel and the Jewish people.

While it was part of the same Ravid interview, the Times of Israel Israeli channel 12 reported Trump as saying:

(…)“ I [had] thought the Palestinians were impossible, and the Israelis would do anything to make peace and a deal. I found that not to be true”

That’s a strange comment when one remembers that after announcing his peace plan “the deal of the century,” Israel and Netanyahu immediately agreed to it, but Abbas said no way.

When Israel was about to annex areas of Judea snd Samaria outlined in Trump’s plan, Trump told Netanyahu that Israel could only make peace with the UAE if they dropped that annexation. Israel trusted Trump, so they agreed. Thanks to Trump’s mediating, Israel made peace with two other Arab nations. Was it because Trump was upset at Netanyahu he said Israel didn’t want peace? attacked Israel

As for Abbas, in 2017, when Trump was still developing his peace plan, Kushner and Greenblatt met with Abbas. The informed the father figure he would have make some concessions, just like Israel. The Palestinian President got angry at that suggestion and had a cow. No president had ever asked them to make concessions.

After Trump announced he was moving the U.S. embassy to Jerusalem, VP Pence canceled a Mid-East trip because Abbas refused to meet with him. When Jared Kushner tried to meet with Abbas about the Century, Abbas refused. That was despite that neighboring Arab countries were joining in on the meeting.

In 2018 Abbas, Trump’s father figure, announced that the Holocaust wasn’t caused by Antisemitism, but it was caused by how Jews lent money and that today’s Jews aren’t really Jews anyway.

Taylor Force Act’cwas supported by Trump and passed by Congress. The act withheld  U.S. taxpayer dollars from the Palestinian Authority until they stopped rewarding terrorists with blood money. Led by President Abbas, the Palestinian Authority gave up U.S. aid because they wanted to continue to pay terrorists. And at t the time, Trump didn’t call him a father figure.

Israel wanted to make peace, and father Abbas pushed against Trump’s efforts, looking at their behavior.

Jews used to control Congress and now run the media?

Was it anger at Bibi, or does he really feel this way about the Jewish people that includes his Daughter Ivanka, son-in-law Jared, and their children?  In that interview with Barak Ravid, Trump shared what he thought about American Jews as part of the podcast “Unholy: Two Jews on the news.”

I agree with this point. If it wasn’t for the evangelical Christians who tend to vote Republican, Israel would have little support in Congress. Republicans support Israel because of the evangelicals, and the Democrats know that Jews will vote for them whatever they do. And since the far left is anti[-Israel, that’s how the Dems vote.

Sadly, the Jews have boxed themselves in by not playing with both parties. Many of my African-American friends feel the same way about their relationship with the Democrats.

Trump’s later statements can be best described as anti-Semitic dog whistles (or worse).

” It used to be that Israel had absolute power over Congress. And today I think it’s the exact opposite,”

With that comment, the former President seemed to be agreeing with the anti-Semitic trope that Jews control the government. If we really controlled the government, people like Rep.Omar, Rep. Hank Johnson, or even Maxine Waters would have been thrown out on their Jew-hating asses long ago.

He went on to say

So now he was implying his belief in the anti-Semitic canard that the Jews control the media. If that was true, this site’s traffic would be higher.

The Ravid interview raises the question which Trump is the real Trump. Is it the President who was very pro-Israel and very pro-Jewish? The man I supported so strongly during both his campaigns for POTUS. Or is this a different Trump? One who lied to his Jewish supporters for four years, or who is throwing the Jew under the bus until or unless he runs again in 2024.

What Gives Donald Trump? Tell us what you really believe about Jews and Israel.