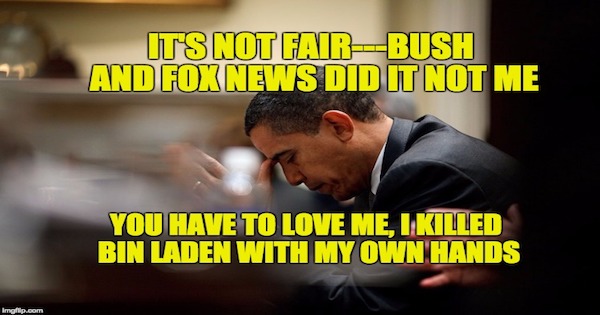 You’re witnessing a fantastic fit of pique from Barack Obama. This American president is watching a legacy of statism, Islamism, globalism, elitism, post-Americanism, Antisemitism, and post-Christianity slip away, and he’s fighting tooth-and-nail for the ideological sludge in which he has mired America.

Obama is having a terrific tantrum, the effects of which President-elect Donald Trump must reverse. Why so? Aside from a few laudable initiatives—trade with Cuba and a lesser involvement in the Syrian civil war—Obama has fought for nothing but the dreadful propositions already mentioned. Trump has promised to fight for the American people. Never the twain shall meet.

But the metrosexual Obama has finally met his match. Two Alpha Males, Trump and Russian President Vladimir Putin, are causing the world’s wunderkind to unravel. Both represent the interests of their voters; while Obama fights for the coercive ideology he shares with Angela Merkel and George Soros. Looking for a brawl with the Russian Bear certainly works against the interests of the American people, and for Washington, Brussels and the “expert” and think-tank internationalist industry.

And so, in the words of a Kremlin spokesman, “Almost every level of dialogue with the United States is frozen.” This, as a spiteful Obama punishes Russia for infractions the American people, by-and-large, don’t believe the Russians committed. Differently put, “The proof is not in the Putin.”

Ordinarily, to mouth about someone’s “motivation” is to make a logically invalid argument. The reason being that the motivation behind an individual’s deeds can seldom be divined. But, “Barack Obama, it’s not as though we hardly knew thee.” We know the outgoing president all too well.  Obama is a case study in hubris. He began his presidency by claiming, in 2008, that his crowning was “the moment when the rise of the oceans began to slow and our planet began to heal.”

“[T]his was the moment when we ended a war and secured our nation and restored our image as the last, best hope on Earth,” Obama vaporized. “This was the moment—this was the time—when we came together to remake this great nation so that it may always reflect our very best selves, and our highest ideals.”

His eight lean years Obama ended with similar arrant and arrogant nonsense: “I’m confident that if I had run again and articulated [my vision of progressive change], I think I could’ve mobilized a majority of the American people to rally behind it.”

It’s perfectly plausible, then, to posit that Obama’s retaliation against Russia, three weeks before the inauguration of his successor, is a last-ditch attempt to gain one-upmanship over Trump, who is dominating the news cycle, a thing the narcissistic incumbent can’t abide.

Essentially, Obama is crashing about like a maniac in trying to retain his unwarranted status. Lo and behold, in the course of BHO’s flailing, we discover that government is perfectly capable of deporting foreigners when it wants to. Witness Obama’s petulant expulsion of Russian diplomats, payback for that country’s alleged harassment of American diplomats (no proof provided). This from the man who did nothing about Muslims murdering an American diplomat in Libya.

Likewise, Obama’s Russophobic lickspittles—establishment conservatives and neoconservatives included—screamed blue murder when Trump merely threatened trade tariffs, as part of a clever negotiation strategy. Trump would launch a trade war, they hollered. The same sorts think nothing of risking real wars by inflicting sanctions that starve children and radicalize entire countries against the US.

In the context of our America-First interests, let’s look briefly at the significance of Obama’s dust-up with Israeli Prime Minister Benjamin Netanyahu. Israel, seeing a weakness in Obama’s crumbling facade, has pounced. Here’s the sequence:

First came the UN’s unremarkable resolution, condemning the establishment of West Bank settlements as a flagrant violation of international law and a major obstacle to that ever-elusive peace with the MOPE (Most Oppressed People Ever, the Palestinians). Security Council Resolution 2334 was one among countless over the years. Passing anti-Israel resolutions is a popular UN parlor game.

Next was the US’s “decision to abstain” from vetoing that resolution.

Last but not least was Netanyahu’s well-timed fury. The Israeli prime minister has asserted that the US orchestrated the UN vote against Israel. Helping to cement Obama’s legacy as an enemy of the Jewish State was Alan Dershowitz. The prominent pro-Obama civil libertarian has accused Obama of personally lying to the law professor (Dershowitz), early in 44’s presidency, about being friend to Israel.

To top the blows to the outsized Obama ego, the UN cheerily kicked Obama and Secretary Kerry to the curb: It endorsed a truce in Syria, brokered by Russia and Turkey, sans Obama.

So Obama is spinning out of control. His parting shot at Russia has been described in the Russian press using bon mots like “impotent,” “political corpse,” “illiterate in foreign policy,” presiding over a “campaign of disinformation,” as badly behaved as a tenant trashing an apartment he no longer rents; his goal being to “create new problems for President-elect Trump.”

Hissed one Russian political commentator: “Obama has nothing else to do but break all the windows in the White House and deposit a pile of […] on the steps.”

Why is all this good for America Firsters? The dynamic “Process of Trump,” delineated in “The Trump Revolution: The Donald’s Creative Destruction Deconstructed,” is ongoing. Trump, inadvertently yet tactically, has chipped away at the Obama legacy, as the Left, steered by the “nitworks,” desperately galvanize court historians to re-inflate this empty vessel of a president.