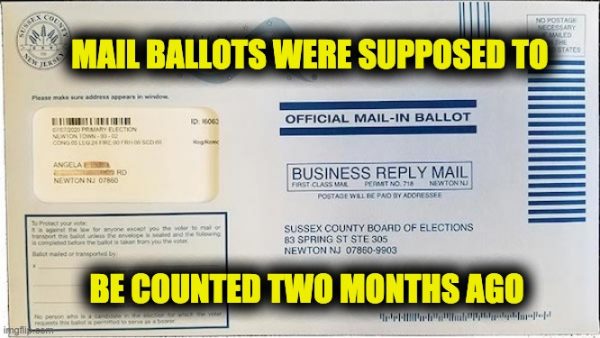 Democrats are pushing really hard to get voters to use the mail. But why? ballots just found

Why should we put so much confidence in a system where the chain of custody of that ballot is unobserved?

Many places have (R) or (D) markings on the envelope to indicate which party you are registered in support of, so we don’t even have the benefit of a secret ballot. Such an artifact allows temptation and personal prejudices to enter into the equation. Even without that indication, there are other clues that someone motivated to mess with an election could use to ‘accidentally misdirect’ mail whose ballot they didn’t want to see counted. Lawn signs and voting patterns by zip code are just two of the more obvious ones.

Even if we could eradicate every instance of human malice or vice in the polarized political environment we now find ourselves in, there is still the possibility of simple error.

If one Primary race after another is turning up significant problems with ballots getting sent out and returned correctly to be part of a vote, what will that signal for the much larger-scale elections in November?

The 1,666 ballots cast in the July 7 primary had been placed in a “mislabeled” bin in a “secure area” at the board office and were not discovered until Thursday. After notifying the state Attorney General’s office of the error, the remaining votes were counted Saturday and certified by the county clerk’s office the same day.

It was not immediately known how many of the misplaced ballots belonged to each local race. However, according to the Board of Elections, the newly tallied votes “did not change the outcome of any Sussex County primary election in any race for any office, Republican or Democrat.”

“The Board of Elections is confident that all ballots received have been processed and the security of all the ballots has remained in place,” the statement read.

The mistake was perhaps the result of a unique election process caused by the COVID-19 pandemic, with a majority of county residents voting by mail and the Board of Elections temporarily relocating to count the votes.

The more chaos that is introduced into the election process, the greater the chance that it will be resolved by armies of lawyers and not poll workers counting actual votes.

It wasn’t so long ago that Democrats did NOT trust this process.

“They’re talking about people mailing in their ballots. Do you trust the security, the honesty of such an election process?”

“Well, I think we’d have to figure out whether this was fraud-proof.”

Those wise words were, once again, spoken by Obama. Back during the 2008 Democratic Primary when Florida was considering mail-in ballots, Obama specifically cited the need for signature verification, to ensure “they can check to make sure that the right people are voting.”

Now, lawsuits brought by the George Soros-backed election lawyer Marc Elias are seeking to gut those requirements. A Democrat lawsuit in Pennsylvania is seeking to prevent election officials from rejecting votes even if a signature on the ballot is completely different from the voter’s signature on file.

…“A mail-in ballot has wrong written all over it.” That’s what CNN reported in 2008, surmising former DNC chair Debbie Wasserman Schultz’s position on proposals to vastly expand absentee voting.

Obama used to argue how difficult it was to commit voter fraud in person. The New York Times agreed that the real threat was mail-in ballots, with the more absentee voting, the greater “potential for fraud.”

And then they saw how an army of lawyers was able to get Al Franken elected under, let’s call them ‘dubious’ circumstances.

Suddenly, the Left changed their tune.

Now they LOVE mail-in ballots. And anyone who doesn’t is anti-patriotic and wants to disenfranchise Americans.

And refusing to purge voter rolls, or having more than 100% of voters cast a ballot in a region does NOT ‘disenfranchise’ any Americans?

Do not trust these people.