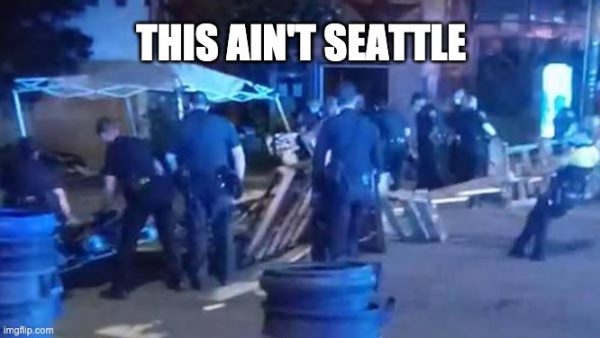 It seems the radical left’s insurrection is spreading across the country.  On Friday, protesters attempted to set up another so-called “autonomous zone” in Asheville, North Carolina, Heavy.com reported.

A poster on Reddit uploaded a picture and said the attempt was made on Lexington Street to create the Miller Town Autonomous Zone in Asheville.

An hour later, someone said traffic was already moving.  Unlike Seattle, this attempt only lasted a couple hours.

Asheville, NC Is in the process of creating an autonomous zone. I am here as a medic and we have a medical team set up right outside the boundaries. Stay safe. pic.twitter.com/uJZPLzs2SR

There were still some people milling around last I checked, but they were all off the roads,” one person said.

Update on #Asheville autonomous zone. Every cop in Asheville showed up, proving they have nothing better to do on a Friday night. Tore down barricade. As of 11pm est, <100 demonstrators remaining. Need more people & support. Many will be back tmrw. This is only the beginning. ✊

The attempt in Asheville isn’t the first since insurrectionists took over a six-square-block area in Seattle.  According to Heavy.com, one was attempted in Portland, but it didn’t get much attention:

Protesters/insurrectionists considered setting one up in Nashville, Tennessee, but Tennessee Gov. Bill Lee issued a warning to demonstrators looking to set up an autonomous zone in front of the state Capitol Friday, saying that “lawlessness, autonomous zones, and violence will not be tolerated.”

Meanwhile, secessionists continue to hold territory in Seattle, thanks in large part to inaction and tacit support from a Democrat mayor Jenny Durkan and the state’s Democrat Governor, Jay Inslee.  After all the riots, looting, violence, and burning down of properties and cars, etc., now we have a group of people that have taken over a section of Seattle Washington.  Astonishingly enough, Seattle’s mayor and the governor of Washington have stood by and allowed this to happen.

It wasn’t allowed in Asheville and won’t be allowed in Music City (Nashville) Tennessee, which demonstrates that Seattle Mayor Jenny Durkan and Washington Governor Jay Inslee are too weak to hold office.