Biden’s Hires And Actions Sent The Message Israel Haters Such As The PA, Hamas, And Iran That He Is On Their Side, Not Israel's 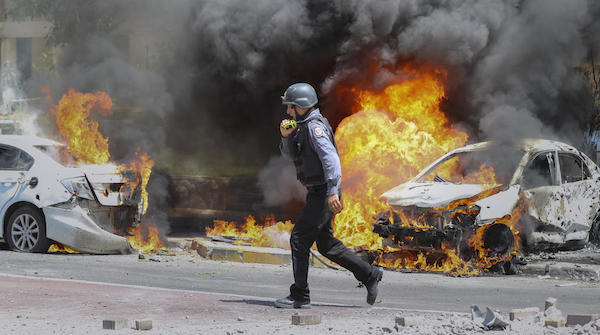 The violence in the Holy Land is increasing, and so is the blame for the conflict. A controversial placement of blame came from Senator Marsha Blackburn (R-TN), who tweeted: anti-Israel attacks

The conflict in Israel would not be happening if President Trump were in office.

Her message shouldn’t be controversial because it’s true. I’m not contending that Joe Biden asked for anti-Israel violence. Still, I do believe the actions of President Biden and his team caused much of the violence happening in the Middle East this week by signaling that under this administration the U.S. support of Israel was in name only.

Biden and his anti-Israel team of Obama retreads have given the anti-Israel Triad of the Palestinian Authority, Hamas, and their Iranian benefactors confidence that this Administration’s support of Israel was nothing but sweet-sounding political bull crap.

A major message to the Triad of Israel haters was the many people he hired for his administration who had Anti-Israel histories: One of which Neera Tanden wasn’t confirmed by the Senate, many of the others were confirmed or were put in positions where confirmation wasn’t needed. There are many more, but here’s a sampling of his team of Israel haters:

And of course, there’s John Kerry-Climate Czar who not only lied to America to gain acceptance for the anti-Israel JCPOA, and on separate occasions told Iran and the Palestinian president not to deal with Donald Trump because he will soon be out of office (in 2018), but told Iranian Foreign Minister Javad Zarif about over 200 covert Israeli attacks on Iranian interests in Syria.

If that doesn’t give the anti-Israel Triad the message that Joe Biden’s pro-Israel statements were empty words what will?

Well, how about the reports that he is already making concessions to Iran which funds Hamas, to achieve his ultimate purpose of getting the US back into the JCPOA which will put the Sunni Muslim states, Israel, and most importantly the United States in existential danger.

Ignoring the Taylor Force Act, Biden has promised to give the Palestinian Authority $75 million in aid. Passed in 2018, The Taylor Force Act was passed by both houses of Congress and signed by President Trump. It stops American economic aid to the Palestinian Authority until the PA ceases paying blood money to individuals and their families who commit acts of terrorism. The Palestinians didn’t stop paying their blood money, but Biden is sending aid anyway.

Through Secretary of State Blinken, Biden has resumed U.S. funding for UNRWA, the United Nations Relief and Works Administration. The UNRWA has allowed its facilities and even their schools to act as terrorist bases, and in one case when the UNRWA was caught storing rockets in their schools, they handed them back to Hamas to shoot at innocent Jews. They could have been part of the barrage of 1,300+ rockets fired into Israel this week.  The UNRWA also pushes the lie that there are over 5 million Palestinian refugees.  In 2012 it was estimated that there were approximately 30,000 of the 1948 Arab refugees still alive. Ten years later, that number has to be smaller.

On the other hand, as POTUS, Donald Trump’s record of support of the Jewish State was much more than empty words. Unlike Biden, Trump’s actions sent a message to the Triad of Israel-hate that Israel was an ally.

Some of Trumps pro-Israel actions included:

If Trump had won the 2020 election all the Israelis and Palestinians who die this week would be unharmed. Trump backed up his words with actions showing that Israel is an important ally of America. Biden sometimes “talks the talk” but the people he’s hired and the actions he’s taken tell

Biden’s Hires And Actions Tell The Israel Haters Such As The Palestinian Authority, Hamas, And Iran That He Is Really On Their Side…Not Israel’s

Israel haters such as the Palestinian Authority, Hamas, and Iran that he is really on their side…not Israel’s

Note for those who want to call Hamas-run Gaza occupied territory, Israel pulled out of Gaza sixteen years ago in August 2005. I can personally attest to that fact as I was in Israel at the time.