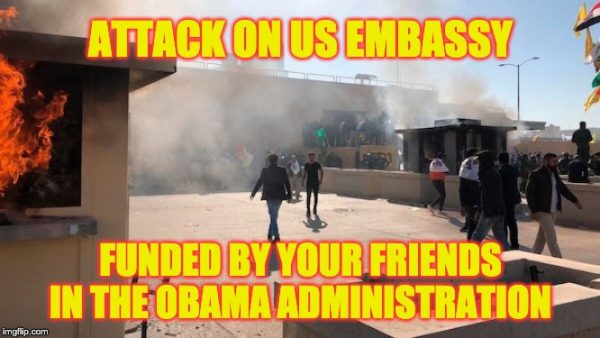 Crazy Uncle Joe claims there were absolutely no scandals with him and Barry at the helm.  Attack embassy Baghdad

There certainly are plenty now Joe, as if there weren’t before.

It turns out that American tax dollars likely financed the attack on our own embassy in Baghdad.

U.S. weapons intended for Iraq’s beleaguered military are winding up in the possession of the country’s Shiite militias, according to U.S. lawmakers and senior officials in the Barack Obama administration. These sources say that the Baghdad government, which was granted $1.2 billion in training and equipment aid in the omnibus spending bill passed last month,  is turning hardware over to Shiite militias that are heavily influenced by Iran and have been guilty of gross human-rights violations.

One senior administration official told us that the U.S. government is aware of this, but is caught in a dilemma. The flawed Iraqi security forces are unable to fight Islamic State without the aid of the militias, who are often trained and sometimes commanded by officers from Iran’s Revolutionary Guard Corps. And yet, if the U.S. stopped sending arms to the Iraqi military, things would get even worse, with IS overrunning more of the country and committing human-rights horrors on a broader scale. The risk of not aiding them was greater than the risk of aiding them, the official said, adding that this didn’t mean the administration was unconcerned about the risks involved.

On Facebook, members of Iraqi Shiite militias proudly display American arms, such as this photo from October of an M1A1 Abrams tank draped in a Hezbollah flag: 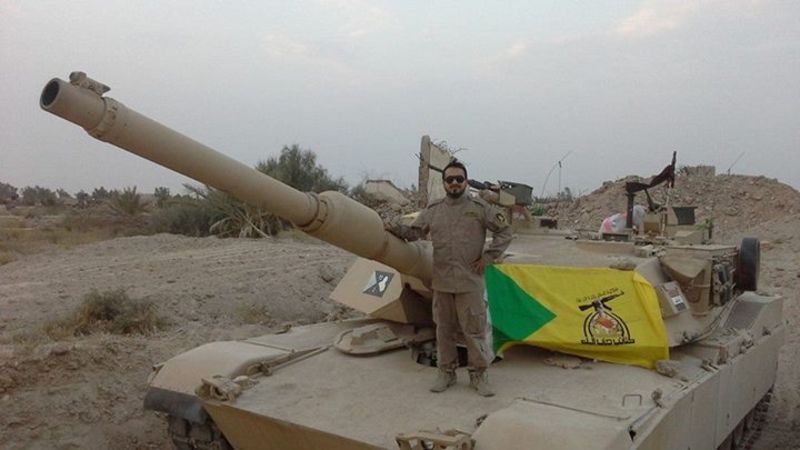 We had reported that the Obama Admin may actually be dropping weapons to ISIS during the Obama years.

Maybe ISIS was not the target at all.

Or maybe we simply armed them all.

Whatever the case may be, it is certainly a good possibility that those militia members were carrying guns that you and I paid for.

Conservativeus.com had this, on the day of the attack:

Everyone seems to forget who helped Hezbollah and the Iran-backed militia that is attacking our embassy in Iraq.

The Obama administration followed up a planeload of $400 million in cash sent to Iran in January 2016 with two more such shipments in the next 19 days, totaling another $1.3 billion, according to congressional officials briefed by the U.S. State, Treasury and Justice departments.

So let’s get this straight.

We dropped weapons which were probably later used against us (they always are) AND we gave nearly $2 Billion to a brutal Iranian regime that is now waging war against us.

I guess he’s delusional enough that he probably believes his own BS.

But the facts are much different than his delusion.

I wonder how historians will rewrite this Obama failure.