Atlantic Writer Warns, ‘Vote Democrat Or There Will Be More Violence’ 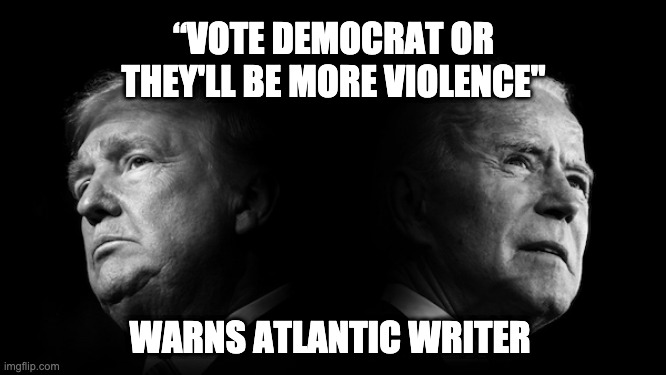 We’ve written before on the Democrat’s promise of violence if Biden doesn’t win in a landslide. The demand that we vote for him appears to be increasing to the level of near hysteria, as threats and intimidation grow exponentially. 1) the Daily Beast reported that a consortium of leftist groups is planning for an “apocalypse” should Trump refuse to leave the White House after a Biden win, and 2) The Atlantic claims Democrats will “kill the country” if Trump wins again. Atlantic writer warns violence

MoveOn.org, Color of Change, and the American Federation of Teachers have banded together and created the Fight Back Table (FBT), among other groups.

The Washington Times reported  about the left prepping for anti-MAGA violence:

“The progressive coalition Fight Back Table has been meeting to game out what happens if Joe Biden doesn’t win by a landslide. It’s not pretty. Last week, a coalition of leading progressive groups gathered on Zoom to begin organizing for what they envision as the post-Election Day political apocalypse scenario…

The meeting dealt with the operational demands expected if the November election ends without a clear outcome or with a Joe Biden win that Donald Trump refuses to recognize. Sources familiar with the discussions described them as serious with a modestly panicked undertone…

…A smaller session last fall had talked about post-election planning, but those discussions were tabled because of the COVID-19 pandemic. This was the first time they were bringing the matter to the 50-plus organizations that make up the coalition. To formalize the effort, they gave it a name: the Democracy Defense Nerve Center.”

The Demand to Vote Democrat

Then we have Shadi Hamid, who wrote in the Atlantic that Republicans have an interest in seeing that Biden wins. He deleted that tweet but left another one just as bad on his Twitter account. 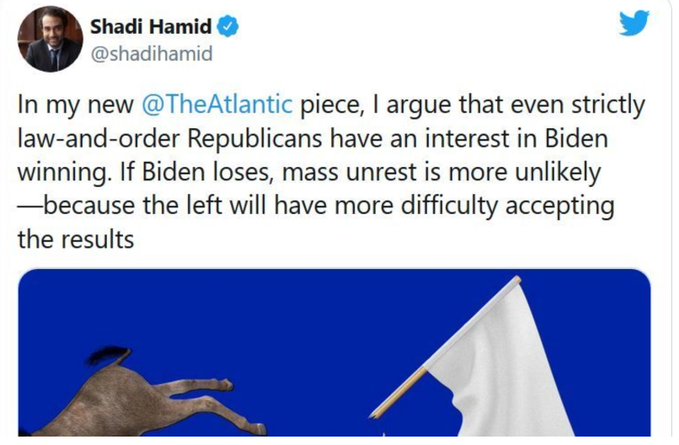 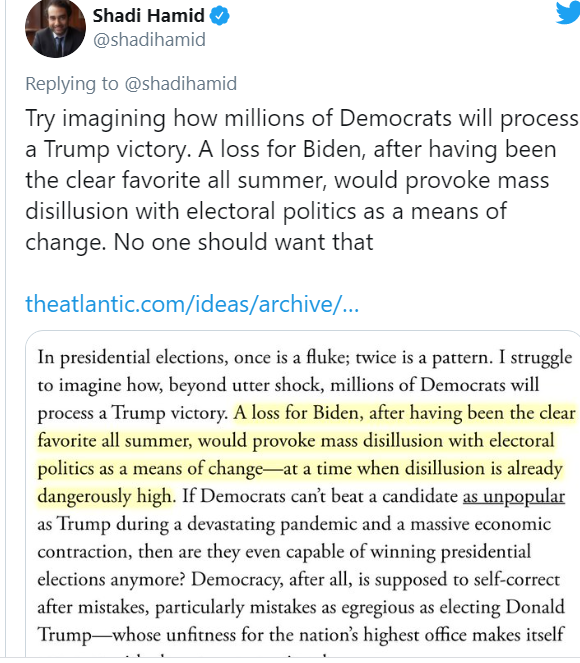 The leftist media has been busily trying to convince Americans that Biden is winning. Biden has never been a “clear favorite,” evidenced by several Democrat Mayors jumping ship. And the threats seem ridiculous considering Hillary told Biden not to concede no matter what. They are trying to build yet another case to call a Trump win “illegitimate.” But, hey, they’ve already guaranteed a violent temper tantrum if Biden doesn’t win.

The threat is clear: this 2020 election is between violent extortionists and Americans.  The only hope we have is to elect Trump again – despite the threats against us. And then prepare for the Democrats to become more violent than they and their cohorts have been already.

So, vote for Biden or his brown-shirts will burn the country down?

I would recommend you rethink that threat.

So, vote for Joe or the beatings to continue?

That is not how America works. If you lose, sit down, shut up. We shut up when Obama won. Why are Dems not held to the same standard?

Hi. Vote for our party cuz if you don't, we'll act like toddlers and throw an even bigger tantrum than we have been over the last few months, because we are self-centered children who never matured into adults and who failed to learn the most basic of human elements—self control.

“For whatever reason, the Left has gotten it into their heads that threatening Americans with more violence if they don’t vote the way they want them to seems like a winning strategy. You’d think they’d know by now Americans don’t like being threatened but we’re not dealing with the brightest crayons in the box here.” Twitchy