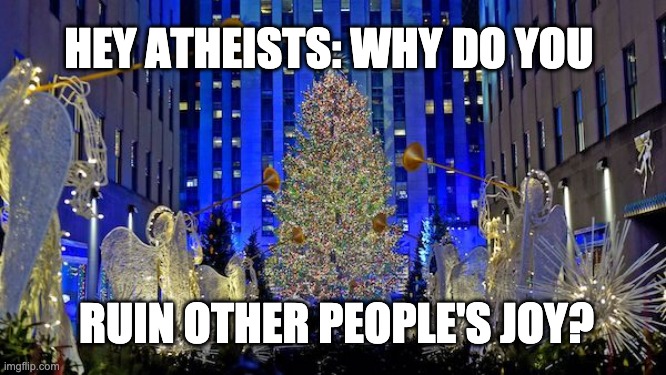 It happens every year at this time: the atheists fighting Christmas season—A community puts up a Christmas tree, and one of two things happen. Either there is an ACLU battle to take it down, or someone fights to get a Chanukkiyah (that’s its real name, not Menorah) placed right next to it. That can be followed by the ACLU representing some atheist group, suing any town whose mayor has a Christmas tree in the living room of their personal residence.

Hey, ACLU,  give it up. America is a majority Christian country. And as a Jew, that doesn’t bother me one bit because I am free to practice my faith (and I like some of the food).  The First Amendment isn’t supposed to stop Americans from celebrating their faith. It’s supposed to stop the majority from infringing on the other faiths.

As Americans, we are all different.  We must celebrate those differences, not merge them into one hodgepodge of progressive mediocrity, celebrating everything simultaneously, while the truth is it celebrating absolutely nothing. America is a great country. It is great not because everyone celebrates the same, but because we can all celebrate our differences.

In Florida a few years ago, threatened lawsuits didn’t force the state to remove a nativity scene t from the capitol rotunda, two atheist-themed messages, a “Festivus Pole” and a rendering of the Pastafarian Flying Spaghetti Monster were added. A year later  Americans United for Separation of Church and State sent a letter to the Florida Department of Management Services on behalf of the Satanic Temple and their diorama of Lucifer falling into the flames of hell was added.

ENOUGH! The people who see the end of the year as the opportune time to celebrate politically correct multicultural nonsense have to stop!

One particularly disgusting part of the 2020 atheist effort is an attack on holiday-themed charity efforts. It’s Charity!!! Mark Tapscott details an example of this idiocy in his must-read post, Atheist Group Goes Full Grinch, Steals Christmas From Hundreds Of Poor Kids Around The World. Give it a read no matter what your faith, it will anger any lover of freedom.