At Least The Democrats Are Consistent (In Their Hatred) 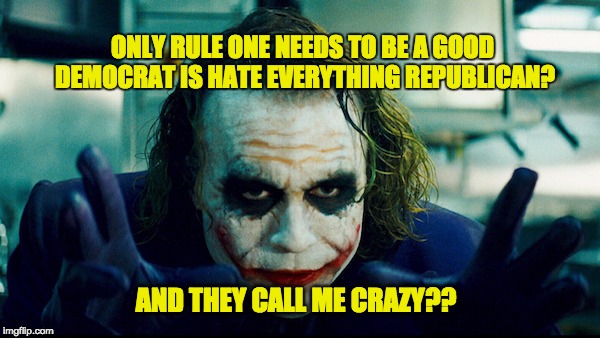 Now, I don’t mean all Democrats. I do have family and friends who are cultural Dems. Grandma was a Dem. Dad was a Dem. So, by osmosis, they are also a Dem, but they speak and vote like a Republican. This is not directed as those people. This is for those Kool-Aid drinking, goose stepping followers of the New Democrat Socialist Elite Party. Listen up!

Everyone, and I mean everyone, with 2 brain cells to rub together has figured out you just simply hate Republicans. Period. There is nothing, and I mean absolutely nothing, that Donald Trump is going to do to make you happy or even get a passing nod from you. He could rescue a child from a burning building and you would want to know why he didn’t have more money allocated so the fire department could have gotten there first.

In President Trump’s search for the new FBI Director, one under serious consideration as a nominee is Senator Joe Lieberman. Democrat leadership is going nuts because they feel like he is not a good fit and, for the first time in a while, I find myself in agreement. Not necessarily for the same reason, but still the wrong choice. At times it seems the Trump Administration is soft shoeing it to make some political peace. I, for one, am here to tell them, STOP! It doesn’t work. They don’t want peace. They want control.

Democrat leadership refuses to look at why they have lost so many seats in so many houses across the nation. Why they lost the Senate, the Congress, and the Presidency. And they keep pushing the same ideas that caused them to lose. They actually really think that they didn’t get their message out well enough, so they are doubling down on it. God Bless ‘em! Please, keep doing it, and more of it.

Bernie Sanders said that Joe Lieberman’s political history and extreme viewpoints on a number of issues make him unacceptable.

But Joe Lieberman received 100% from NARAL on abortion issues. That means it’s a woman’s total right to choose, anytime and without apology! Joe believes in manmade global warming/cooling climate change. Joe was for the Cap and Trade bill. Joe received an almost 90% rating by the Human Rights Coalition because he voted no on a constitutional ban of same-sex marriage. He got an “F” from the NRA as a protector of Gun rights (every Democrat’s dream!)

Joe was critical of Bush’s Medicare plan, and he voted in favor of HIV early treatment initiative allowing people with HIV and aids to get the medical treatment they needed through Medicare.

Joe has a 100% rating by the AFL-CIO and many other unions. Joe voted against Bush’s Social Security overhaul plan along with the Dems. He almost switched to Republican registration but decided not to because it would have given an even 50/50 split in the Senate giving Dick Chaney the deciding vote. And Joe supported NAFTA and CAFTA (along with Dems).

But he’s way too radical for Dems, right? OK, I get it. Maybe it was because Joe didn’t agree with Democrats on:

His support for Israel.
Not supporting IRAN.
Believed Saddam Hussein was developing WMDs.
He supported military action In Iraq.
Joe supported formation of a Department of Homeland Security.
Joe believes in MASSIVE defense spending.
Joe backed every military action we have taken since the early 1980’s.
Joe backs voucher programs for education.
Joe wanted to rescind American Citizenship for Americans who joined ISIS.

Now many of you won’t agree with me, but Joe sounds like a Great American. He’s an independent thinker. He doesn’t always side with Party ideology. What he is doing is what he believes to be right for Americans, not party or particular groups. He works across the aisle when needed.

And apparently, in the New Dictionary of Democrat Terms (soon to be released on Amazon) that makes you extreme.

Some gems from other Dems:

Sen. Claire McCaskill (D-Mo.): “We don’t need anyone who’s put on a red shirt or blue shirt — or who’s campaigned for president.”

All great reasons not to bring him up as a nominee… NOT!

Once again, Democrats are proving the point that they are so out of touch with Americans. Americans want movement in government. Real movement. On real issues that actually help Americans get jobs and build businesses.

Americans don’t want Republicans or Democrats. And they sure as heck don’t want Democrat Progressive Socialists in office.

They want America. A solid and secure America. They want a real free America. With freedom of religion, freedom of speech, and freedom to grow your business the way you should be able to. Simply put, the freedom and liberty to pursue happiness and prosperity.

Republicans, GROW A SPINE! Trump won on policy. Many of you won because you rode those policies. Now it’s time to deliver. Enact and carry out what you were voted in to do or get ready to collect unemployment.

“If you succumb to the temptation of using violence in the struggle, unborn generations will be the recipients of a long and desolate night of bitterness, and your chief legacy to the future will be an endless reign of meaningless chaos.” – Martin Luther King, Jr.