Man Claims He Was Sexually Assaulted By Cory Booker 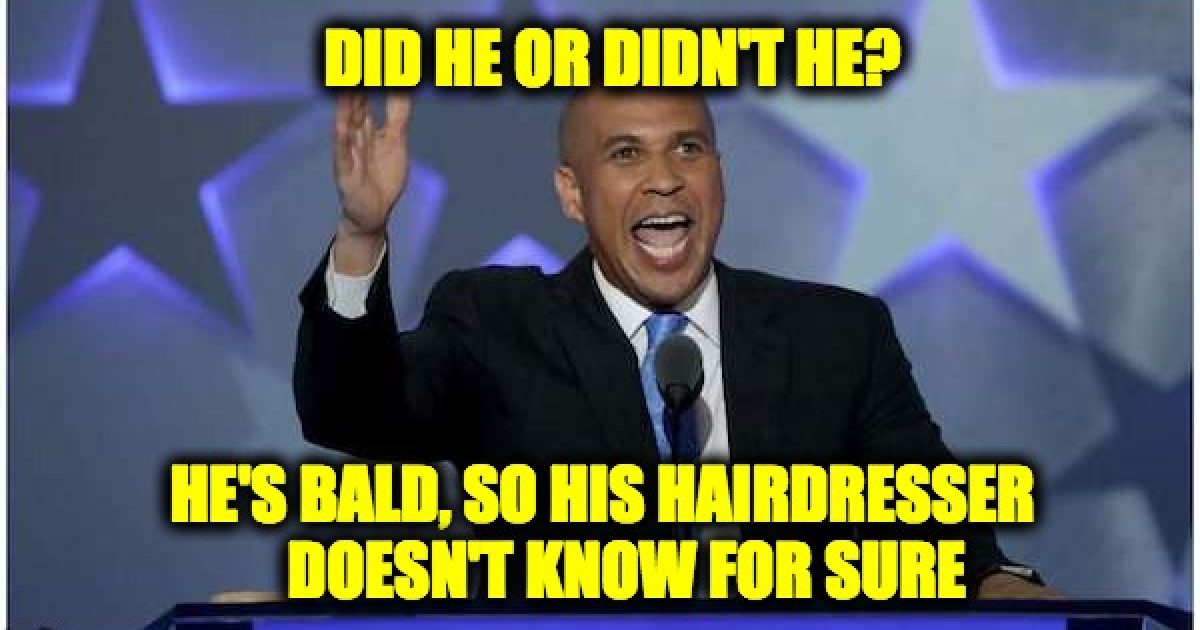 A guy going by the twitter name of “Deep Throat” claims to have been sexually assaulted by New Jersey Democratic Senator Cory Booker (he adopted the nom de plume of Deep Throat in recognition of the Watergate informant).

The accuser, Deep Throat tweeted a document telling his story on October 20th (embedded below). According to what the accuser says he told his lawyer:

Here is a description of the incident as I described it to a lawyer:

I stopped to use one of the building’s single-occupancy restrooms. Upon washing my hands prior to leaving, I heard knocking on the door. When it comes to these restrooms it is customary to knock first in case someone is using it, even though there is an inner lock. When opened the door, Mr. Booker was there. He smiled and very gregariously said “Hey!” We engaged in some brief idle chitchat in the entryway and then he asked me to speak in private. What happened next, happened so fast that it was hard for me to comprehend what was going on. It was one of those surreal moments where what was happening was such a deviation and such a perversion of one’s natural daily routine that I hardly knew how to react. He pulled me into the restroom, albeit not too forcefully and slowly pushed me against the restroom wall. He said that “Being a hero was a serious turn-on”. He continued, “The Senate appreciates fine citizens like you. Especially this Senator.” He then put his left hand on my groin, over my jeans and began to rub. I seem to remember saying something like “What is happening?” It was a bit like having vertigo. He then used his other hand to grab my left hand with his right and pulled it over to touch him. At the same time, he disengaged from rubbing me and used his left hand to push me to my knees from my shoulder for what was clearly a move to have me perform oral sex on him. At that point, I pulled away quite violently and told him I had to go. I did not see him again before he left.

The accuser describes himself as a liberal who is no longer a Democrat, and gay.

He says that after the incident he consulted with two attorneys on the matter and provided them with some corroborating evidence, not much, but much more than Kavanaugh accuser Christine Ford provided.

I wanted so badly to speak out but I was highly ambivalent about the consequences of going public. So I reached out to two lawyers anonymously. One of them got back to me; Harmeet Dhillon of the Dhillon Law Group, a 1st amendment trial lawyer and RNC committee member. Once we established privileged communication, I told her my story; disclosing my real name and the details of my case. This included the precise date, location, some corroborating photographic evidence and two possible hearsay witnesses that I had told my story to subsequent to the incident. It was, at the very least, much more probative evidence than what was brought forth during the Kavanaugh debacle. Ms. Dhillon responded to me with respectful immediacy, offering candid advice and compassion tempered with pragmatism. And in a refreshingly rare act of bipartisanship, she recommended I contact Ronan Farrow, the father of the modern #metoo movement himself.

On October 7, the accuser contacted Farrow providing him part of the story. Farrow got back to him on the 11th and asked to talk to him on the telephone. On the 12th the victim sent ways he can be reached and that his calendar was open.

Between October 12th through the 15th, I emailed him 2 additional times with the final email stating that I would move onto trying to contact another journalist and wished him well. It wasn’t until this morning, 8 days after his initial response that he contacted me again with an email, a voicemail and text message.

Later in his document, he explains, ” Do I continue to engage with Ronan Farrow? I have no idea if he’s giving me the runaround. Nor do I have any guarantee that his political ideology will not color his objectivity as a journalist. In light of the Ramirez story, it’s clear that that is a distinct possibility.

On Sunday the 21st “Deep Throat” sent out a text defending Farrow.

It seems that nuance is getting murdered by noise so let me just say again: I respect @RonanFarrow as a journalist. I don’t know him personally, but he seems like a good guy. My critique of him is based on how I perceived our communication. Doesn’t make him a bad guy.

As far as Booker’s sexuality there have been rumors that he is gay, but when he’s talked to the press about the rumors his answers were very ambiguous. For example, in August 2013 he told the Washington Post:

People who think I’m gay, some part of me thinks it’s wonderful. Because I want to challenge people on their homophobia. I love seeing on Twitter when someone says I’m gay, and I say, “So what does it matter if I am? So be it. I hope you are not voting for me because you are making the presumption that I’m straight.”

While the accuser claims to have provided his lawyers with corroboration, he hasn’t shared corroboration with anyone else. Therefore there is no proof that he is telling the truth about the senator.  These accusations are being shared but the reader must keep in mind that  Booker should be considered innocent until proven guilty. In the end, it is Senator Booker himself that demanded stories such as this one to be shared.

Thank you for speaking truth to power. What you did today for survivors across this country, was nothing short of heroic. In awe of your courage and bravery. #BelieveSurvivors pic.twitter.com/u9uLBFFp1S

According to the accuser, an investigation cannot happen because it is past both the civil and criminal statutes of limitation for his Booker incident in the state which it happened and is outside the responsibility of the FBI. I wonder, however, if this incident can be investigated by the Senate ethics committee.

The accuser ends his document by asking of Cory Booker is really Spartacus or just another a**hole. Even without these charges, I vote for the later.

Sen. Booker has not yet responded to the charges outlined by the accuser in the document below:

#mentoo by Jeffrey Dunetz on Scribd 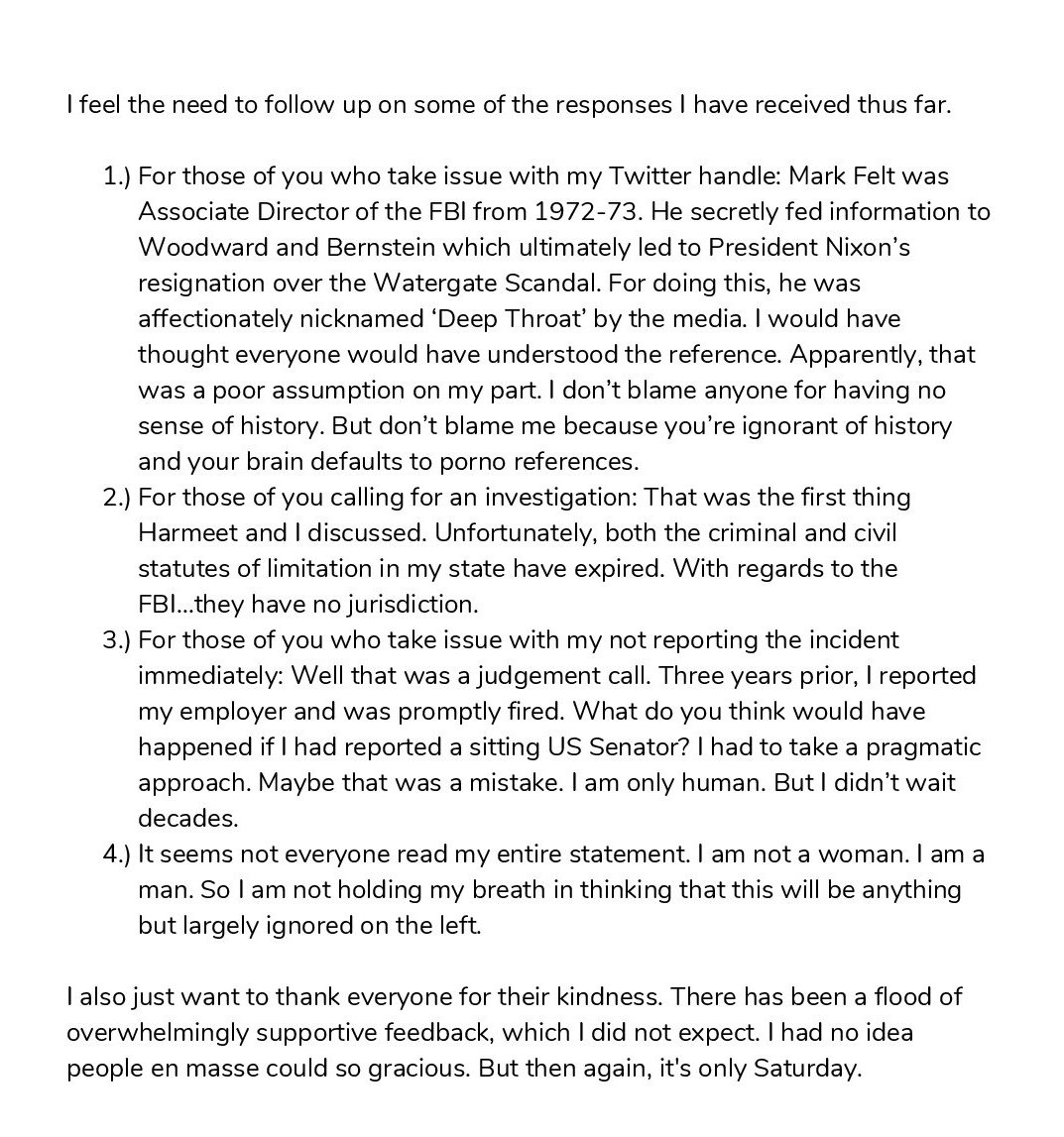 A guy going by the twitter name of “Deep Throat” claims to have been sexually assaulted by New Jersey Democratic Senator Cory Booker.