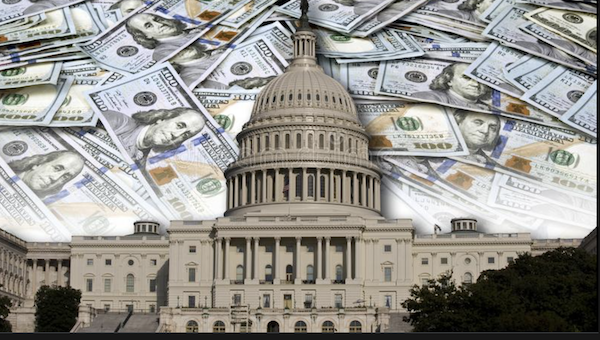 COVID was a horrible pandemic millions of people died, and many of those who survived the virus went through hell trying to fight it. Even the people who didn’t catch COVID had suffered through the pandemic with lockdowns that destroyed businesses, mandatory mask-wearing, and obligatory vaccine-many had a choice between taking the shot or losing their jobs.

Per the Wall Street Journal, a group of people didn’t suffer through the pandemic as much as the rest of America: federal government officials “who made well-timed financial trades when the pandemic began.” They knew what was coming and used it to make money.

Officials at “Health and Human Services reported 60% more sales of stocks and funds in January than the average over the previous 12 months, driven by a handful of particularly active traders.”

In March 2020, President Trump announced 15-days to stop the spread, and at the direction of President Trump, Tax Day for 2020 was moved from April 15 to July 15 for all taxpayers and businesses.

Around the same time, “then-Transportation Secretary Elaine Chao purchased more than $600,000 in two stock funds while her agency was involved in the pandemic response and her husband, Republican Sen. Mitch McConnell, was leading negotiations over a giant, market-boosting stimulus bill.” I suppose she didn’t believe in stopping the spread of cash from those stock funds to her wallet.

The federal government was devising loan packages to help big corporations such as Boeing Co. and General Electric stay in business and pay their thousands of employees. It also paid for a treasury department official executing the loan deal who bought stock in those two companies.

All this information came from the financial disclosure forms required to be filed every year by all senior federal government employees. The required information includes financial assets and trades, not only for the employee but their spouses and dependent children.

Senior federal officials must disclose their financial assets and transactions and those of their spouses and dependent children in annual reports.

“Federal employees are barred from working on matters in which they have a significant financial stake, from trading on nonpublic information learned on the job, and from taking any official action that creates an appearance of a conflict of interest.”

There is a way, however, to get around those rules. “Most agencies’ ethics rules focus on what kinds of stocks officials can trade, not when they can trade. And there are no restrictions on federal officials’ investing in diversified mutual funds, which were more volatile than usual early in the pandemic. Ethics officials certified that the employees identified by the Journal were in compliance with these rules.”

The Wall Street Journal summarizes the trades in each federal agency during the early COVID months. It identifies and provides great detail about the senior officials described above and some of their colleagues who also took advantage of the pandemic.

Many Americans were stuck in their homes, teachers’ unions prevented schools from reopening, hurting kids academically and mentally, and American adults had to deal with all the other restrictions. At the same time, some senior government officials were making money off of our suffering.

Laws must be changed to prevent senior officials from taking advantage of American crises. And possibly making decisions based on increasing their wealth.

The full WSJ  Report on Federal Employees taking advantage of COVID can be found by clicking here.  It is well worth your time to give it a read.

IMPORTANT: if you like this post, please share its title and URL with your friends and any social media sites compatible with the content of the post… The Lid is free and will remain so. But keep in mind it’s reader traffic that makes The Lid attractive to advertisers.  Revenue from advertisers helps to fund the maintenance of the site, the latest journalism software, research, etc. …So please help The Lid produce the best content possible.