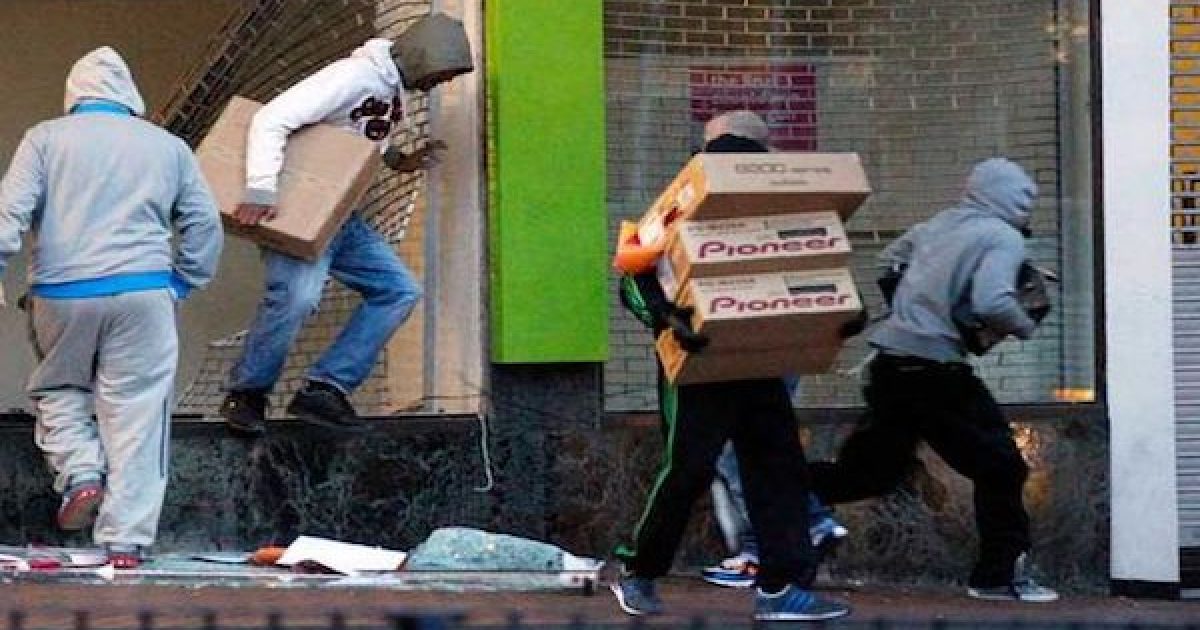 Imagine a natural disaster hits, like when Hurricane Irma hit Florida or when Hurricane Harvey hit Texas, and suddenly the looters are out destroying store fronts and taking what they please.

Unfortunately, this happens regularly. Crappy, lazy people like to take advantage of a bad situation. For example:

When will they make their lives matter?

These people steal from stores, homes, cars, and anything else that may have anything of value inside. Sounds horrible, right? If you’re a hard working American who pays for everything they have, then you likely answered yes to that . If you’re a liberal, you likely asked, “What’s the harm?”

An author and journalist came under fire on social media Monday, after she tweeted a reply to an anti-looting warning from Miami police by saying: “The carceral state… is inseparable from white supremacy.”

This was in response to the Miami Police Department tweeting out a photo during Hurricane Irma of looters who’d been arrested with the caption, “Thinking about looting? Ask these guys how that turned out. #stayindoors.”

Thinking about looting? Ask these guys how that turned out. #stayindoors pic.twitter.com/7m42B0KFr4

Though Sarah Jaffe’s tweet on Monday garnered 1,500 likes, it sparked more than 100 comments — many of which were critical and accused her of being racist.

They have prisons, crime, and private property in Nigeria too,” one user wrote. “And Egypt. And India. Nothing to do with white supremacy. Poverty/inequality.”

“So you’d be ok with someone breaking into your house and stealing all your stuff to avoid a ‘carceral state’?” another asked.

Someone replying to Jaffe said, “You’re saying non-whites can’t help but steal, so they shouldn’t be punished? Seriously? Keep your racist opinions to yourself. #ShameOnYou.“

Here are some of the responses she got:

If you want to make a point about disproportionate Black incarceration, then make it. But a statement like this makes you look ridiculous.

They have prisons, crime, and private property in Nigeria too. And Egypt. And India. Nothing to do with white supremacy. Poverty/inequality.

And this has what to do with the fact that blacks were arrested for looting? I don’t care what color they are. Lawbreaking thugs.

cool. I agree with you. What do you have, and where do you live? Don’t complain when I come take it, unless you’re some sort of racist.

This is just a continuation of the liberal-forced degeneration of American English into political correctness: arguing against illegal immigration is being anti-Hispanic, fighting against Islamic terrorism is xenophobic, and now wanting to put looters in jail is white supremacy.