Arpaio is Free! And Hypocritical Snowflakes Are Crying 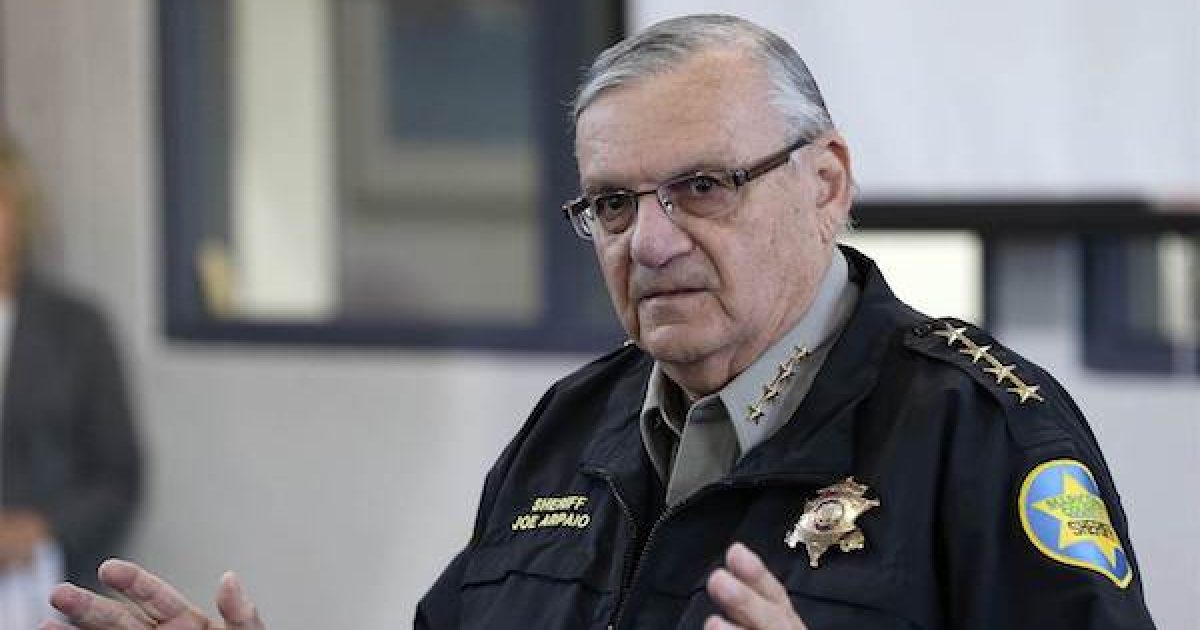 The Left is outraged again (SURPRISE!) at President Trump. This time for pardoning Sheriff Joe Arpaio. Do I agree with the pardon? No. In my opinion, Trump should have waited for the appeal because I believe Arpaio would have been found innocent, but so be it.

The President, like every other President, had the right to pardon or commute the sentence of whoever he wants. The ONLY time he can’t is if it was an impeachable offense. Otherwise, even if the offense is corruption, the pardon stands (you know, like when Slick Willy pardoned some of his bank and tax evasion buddies!)

President Trump is standing up for law enforcement as he said he would during his campaign by granting Sheriff Joe a pardon.

Joe Arpaio the former sheriff of Maricopa County Arizona was convicted of contempt by a federal judge. He was charged with violating a court order that intended to prevent the sheriff’s traffic patrols from targeting illegal immigrants. The sheriff continued the patrols because they were aimed at keeping the streets safe, not simply getting illegals off the street. Though, in many cases, that’s exactly what it accomplished.

In this country, humans who are citizens have constitutional rights. Humans here illegally only have the right to return to their native country and be treated humanely as the U.S. government escorts them home. Bologna sandwiches and pink underwear, Sheriff Joe’s standard prison issue, are humane treatment, just for the record.

Arpaio was wrongfully accused of violating the rights of Hispanics for allegedly using racial profiling tactics to identify people at traffic stops and detaining them based on the suspicion that they were illegal immigrants. Arpaio denied all of this saying there were no sheriff’s patrols dedicated to looking for illegals, only that they were dedicated to protecting the public. He the stated that his highest priority was keeping citizens safe.

To make matters worse, Arpaio was denied his right to trial by jury as guaranteed by the sixth amendment. US District Judge Susan Bolton decided she would be the only one who would pass judgment on the former Sheriff. Amazing! An Obama-appointed judge didn’t know that Joe had a constitutional right to a jury by his peers. Unbelievable.

For many years, Sheriff Joe’s critics claimed he was a racist. I have to call them all brain dead! All you have to do is look at his department to see that couldn’t be further from the truth. But when it comes to social issues, the Left has never been interested in the truth.

If they had simply looked, they would have found his office to employ the highest percentage of Hispanic officers and staff in the state of Arizona.

They would also have found more Hispanic officers were promoted to command positions under his leadership than any other law enforcement agency in the state. WOW! How bad is that?

And to top off the absurdity, Arpaio has two Hispanic grandchildren. So, if he’s a racist, then he must be racist against his own family, right?

The Left has labeled him a racist for actually having the guts to enforce U.S. immigration law. It’s a mantra that’s failing. Americans are smart and, for the most part, are seeing the fake rage of the Left.

Arpaio’s case has been politically motivated from the beginning. We all know that when the FBI came out and said they were investigating Hillary in 2016, the left went nuts. How dare you tell people you’re investigating her and trying to influence an election! They were outraged.

Yet the Obama administration’s department of justice filed charges against Arpaio two weeks before his election and that’s OK? Really? Hypocrites, the lot of them.

Trump promised during his campaign that he would support the Blue Line and he is doing just that.

Many on the Left say it’s a travesty of justice, but I say really? What hypocrisy! They had no problem with Obama’s many pardons. Obama commuted the sentences of drug pushers and distributors who were working major metropolitan areas where violence is out-of-control. I’m sure there’s no connection because we all know the drug pushers and users are never violent, right? Their activities never lead to violence or death (read with heavy sarcasm!)

Mr. Obama granted clemency to over 1700 people, more than any other president on record (except President Ford who gave over 1300 pardons to draft dodgers.) Obama’s last week in office he commuted the sentence of Oscar Lopez Rivera, a Puerto Rican nationalist with links to several deadly bombings back in the 1970’s. He’s called a political prisoner by many on the Left.

Even though Rivera plotted to bomb and then overthrow the U.S. government, the Left still refer to him as a political prisoner. I guess they forgot about his ties to a group connected to more than 100 bombings in U.S. cities!

Obama’s commutation of Rivera’s sentence is interesting! He loves these kinds of people. Like Bill Ayers. He seemed drawn to people bent of blowing up the establishment, the government, and any other entity the Left perceives as bad. Rivera, who was to serve more than 50 years in prison, seems to be exactly the kind of person the Democrats have no problem aligning themselves with and pardoning. But Sheriff Arpaio, a law enforcement man of 55 years, just isn’t worthy!

Rivera never stopped his violent streak. He earned another 15 years in 1988 for conspiring to escape and set off an explosion with intent to kill and injure people. But Obama didn’t have a problem with Rivera’s violence. It seems like Mr. Obama is always excited about people who want to come against the government and who want to upset the norm in a violent way. And it gets worse. The groups trying to get him out of prison included the Congressional Hispanic Caucus and the Congressional Black Caucus, among others. REALLY?!

I guess this is the kind of guy we want to allow back on our streets as soon as possible. Just like when Obama tried to empty out Gitmo. I kept saying he didn’t care about this country and our principles. Stories like this prove it.

Various politicians advocated for Rivera’s release, including New York City Council Speaker Melissa Mark Viverito. She lobbied that his imprisonment was based on his political beliefs and the sentence was an “unjust number years.” I don’t think so!

Joe Arpaio gave 55 years of his life to law-enforcement. He murdered no one. He was caught in a corruption scandal known as the Obama Administration. He put his life on the line to keep the people of Arizona safe from harm.

A man who swore to take down the American government planned, and in some cases carried out, bombings were released by Obama because he was “perceived” to simply be a political prisoner. That is just plain asinine. Rivera and his team of thugs took many lives in dozens of bombings.

And those hundreds of simple “drug offenders, dealers, and distributors” that Obama commuted, probably never hurt anyone either, right? Wrong! You know some lead to violent crimes. I guess the Left was good with that too.

The people have spoken. Much of the corruption of the past is about to be exposed. Be ready. It’s gonna get awful hot in here!